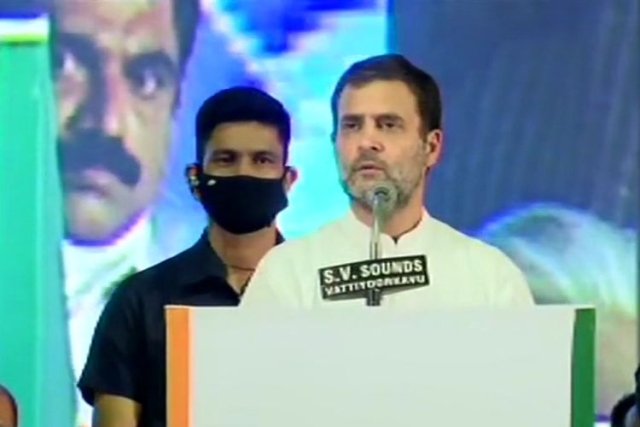 Rahul Gandhi’s speech in his recent visit to Kerala has stoked controversy.

Speaking in Trivandrum, Rahul Gandhi said that he had been an MP in North India for 15 years and had gotten used to “a different type of politics”.

He further said, “For me, coming to Kerala was very refreshing as suddenly I found that people are interested in issues and not just superficially but going into detail in issues”.

Netizens pointed out that Gandhi hadn’t left his North India seat as an MP and was rather kicked out by the people. In 2019 General Elections, Rahul Gandhi lost Amethi to long time rival Smriti Irani of Bharatiya Janata Party (BJP).

He instead went to Parliament from the “safe seat” he contested in Wayanad, Kerala, where Congress has been winning since 2009.

Twitterati pointed out that blaming people’s intelligence for his loss in North India was a new type of low. Social media users also accused him of trying to further north-south divide for political gains.

They further questioned why Gandhi family members go on a temple hopping spree near elections if they are so against "superficial" politics.

Gandhi’s remark is also simplistic as each state, whether in north or south India, faces its own problems of electoral politics. Kerala, for example, faces the challenge of high political violence. J Shamsudeen committee report released in September 2019 gave harrowing details of Left’s reign of terror in Kerala colleges.

And while Gandhi can lampoon Uttar Pradesh, it is the only big state in the country where a party led by Dalits with open (and sometimes even offensively exclusive) Dalit agenda has come to power repeatedly.

Indian politics is complicated. If Rahul Gandhi is counting on north-south divide as a challenge to BJP’s purported national unity agenda to revive Congress’s fortunes, he might be mistaken.