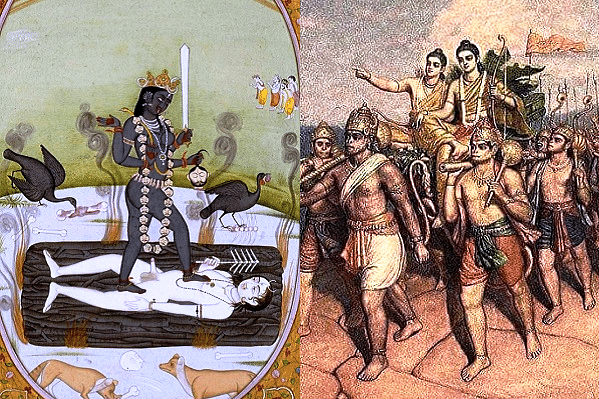 Religion and politics have always been inter-mired in independent India. The modern nation’s birth was itself midwifed by communal violence of the partition. However, the discourse never went as low that the Hindu pantheon of Gods was dragged into the ‘divide and rule’ politics.

Recent saffron-wave in West Bengal has not only irritated its Chief Minister Mamata Banerjee, but also some so-called political analysts. Bengal, the decades long communist bastion turned Trinamool stronghold, is seeing people chanting ‘Joy Shree Ram’ whether it is at Amit Shah’s rally, or at a passing convoy of Mamata Banerjee.

After villagers were arrested for the chant, the slogan has become a sign of rebellion, some of whom have gone on camera to assert that they will keep chanting it, even if it results in their incarceration.

It is funny how those who have little knowledge of both Ram and Kali are dissing this popular wave in Bengal. Self-proclaimed agnostics are now passing judgements like, “I sometimes wonder if these Jai Shri Ram walas have ever heard of goddess Saraswati... Jai Shri Ram huh,” or “We Bengalis are not drawn to the Jai Shri Ram patriarchy of the Hindi belt, We worship the powerful female principle ...”.

One can only wonder how much arrogance is required to make egregious claims about Hindu deities without knowledge, and how easy it is to do so.

Political commentators should take a minute to realise how their comments punish the openness and plurality of Hinduism. They lose the right to complain that Hindus are becoming ‘intolerant’ when they have themselves disincentivised tolerance. It would be better if they stick to their job. They can analyse what the rise of slogan “Jai Shri Ram’ in current political climate means, but without any knowledge, they have no right to pit Kali against Ram.

The increasing popularity of the slogan ‘Jai Shri Ram’ simply shows that a pan-India mobilisation for justice against a history of Hindu persecution is taking shape, and the struggle for the Ram Temple at Ayodhya is fast becoming the symbolic fight for recognition of historical crimes against Hindus.

With ‘Jai Shri Ram’, every Hindu relives what was deleted from official memory-the history of forced conversions, massacres, destruction of universities and schools as well as razing to the ground of several Hindu temples.

The conquerors broke the idols, killed the priests, and the building-materials and looted wealth were utilised to erect a mosque at the same site. During the Arab conquest of Sindh, a Shiva Linga was placed at the entrance of the mosque to be trampled by those entering the mosque.

The seventeenth century Mughal emperor Jahangir, in Tuzuk-i-Jahangiri, boasts of tearing down a temple in Benaras and converting it into a mosque. He says, “with God’s blessing it is my design, if I live, to fill it (the city of Benaras) full with true believers.”

Interestingly, cultures around the world device rituals in remembrance of the tragedies they suffered. An orthodox Jewish wedding involves a tradition of breaking glass. It is a reminder that despite the joyous occasion, Jews still mourn the destruction of the Temple in Jerusalem (the current site of the Dome of the Rock and Al-Aqsa Mosque), reciting, "If I forget you O Jerusalem...".

Remembrance is the mechanism of history and civilisation. After suffering holocaust under Hitler, Jews gave the slogan, ‘never again’, in remembrance of the tragedy. The Chinese remember the time of Western imperialism and Japanese interventions between 1839 and 1949 as the ‘century of humiliation’. These references give an outlet to the collective pain that hides silently inside the hearts of the sufferers.

Remembrance is the first step towards healing, and healing gives way to forgiveness. It is based on this truth, that society makes dedicated and institutionalised attempts to recognise historical injustices and their continuing forms.

Those who say ‘forgive and forget’ in the face of mounting evidence of Hindu persecution and continuing Hinduphobia, must remember that, (a) amnesia will not result in sustainable peace, for that, however difficult it may be, we need to deal with the truth; (b) there is no moral right to forgiveness.

Rajeev Bhargav, a proponent of Nehruvian secularism has himself said: The relevant question is not whether or not to forgive but rather under what conditions is forgiveness appropriate. And the answer is: only when it restores the self-respect of victims. And when can that happen? Only when perpetrators publicly acknowledge their wrongdoing, distance themselves from the wrongful act, and join victims in condemning their own past actions.

The rise of ‘Jai Shri Ram’ shows that Hindus are fighting against the hegemony that denied them the truth of their suffering, and therefore, a chance to heal. And since no other political party is ready to recognise it, the slogan has inevitably become associated with Bharatiya Janata Party (BJP).

The slogan ‘Jai Shri Ram’, shouldn’t be overread, nor underread, by both supporters and detractors. Those who misread it and use it in their ‘divide and rule’ politics to pit Ram against other deities, like Rahul Gandhi (‘Don’t have faith in Rama, but I am a devotee of Shiva’), will end up making complete fools of themselves.

Similarly, the current proponents of Kali versus Ram would do better to research a bit before embarrassing themselves.

In Devi Mahabhagvatapurana, Bhagwati answers Vishnu’s prayers and herself asks him to take avatara as a human-being to protect the world from Ravan. Bhagwati then tells him that Laxmi in the form of Sita, “who will be no one else but me”, will help him. When Vishnu expresses concern that Ravan himself was a devotee of Bhagwati and therefore invincible, as long as she stays as his isht in Lanka, she says:

“This whole world is mine, and it is me who has been revealed in the form of this myriad and vast world. Therefore, anyone who torments the world, torments me.”

She mentions further that those who misuse their power to tyrannise the weak and helpless, their devotion doesn’t bear fruit. Therefore, Bhagwati took the gentle, mild and sweet form of Sita. Sita was alone in jungle and deceitfully abducted by Ravana. This way, not only did the demon tyrannise the weak and helpless but also insulted the Bhagwati (whom he claimed to be a devotee of), causing her to leave Lanka.

In Tantra traditions too, another avatara of Vishnu, Krishna, is identified with Kali. In the Tantrarajatantra, Lalithamba and Krishna are shown as one and the same. While former is maya from the perspective of males, latter is from the perspective of females. In the Todala Tantra, each of the ten Mahavidyas, forms of the supreme Goddess, are accompanied by their male manifestations. Here, Krishna accompanies Kali.

It is also mentioned in Devi Bhagwata, that while Kali herself is Krishna in the male form, to accompany her, Shiva takes the female form of Radha. Both Krishna and Kali are shyam-varna (black), while Radha and Shiva are gaur-varna (white). In a beautiful 1882 print, Radha is shown worshipping Krishna in the form of Kali.

Krishna and Kali, both deities often appear together in Bengali devotional practice. A great example of this is the Krishnakali temple, Kalighat in Kolkata. The temple belongs to the composite form of Krishna and Kali. The three most important Kali temples in Kolkata– Kalighat, Adyapith, and Dakshineswar– all contain subsidiary shrines dedicated to Radha-Krishna. Likewise, it is common to hear Krishna’s mantra chanted at Kali temples. This union is also reflected in the the poetry of the Baul sect (usually aligned with Krishna bhakti) and Shaktas.

The legendary Bengali poet and Shakta sadhaka of 18th century, Ramprasad Sen, a Kali-bhakta named after Ram, has written a beautiful poem depicting this union:

“You know almost nothing concerning Mother’s grandeur. She is the infinite dream power of reality. She is the dynamic play of pure consciousness. The one who sports as divine love incarnate, Krishna of the tender human heart, is the very one who rages blissfully as Kali, consuming names and forms entirely. Both embody nondual wisdom. Meditate on his flute and her sword as one!”

Ramprasad's literary works, enriching the Bengali tradition of Shyama Sangeet, include Krishna-kirtana apart from Kali-kirtana. Another heart-warming poem is by Nabai Morya, a 19th century Bengali poet, where the devotee requests Kali to “strike the pose of sweet Krishna”.

Examples endless in numbers and beauty maybe given of how the Shyam-varna Ram and Shyama are one and the same, not just in Vedanta, Puranas and complex Tantric works, but also in popular culture and living traditions.

All its dirt aside, Indian politics has never taken divide-and-rule as low as to the Hindu pantheon. In fact, Hinduism has been a great unifier. Political parties often brandish different deities to deliver a message across their electorate (“As BJP sticks to Ram, SP picks Vishnu, Congress Picks Shiva for LS polls”).

Right or wrong, honest or dishonest, selfish or not, this creates an overall atmosphere of unity where all parties are seen paying obeisance to some minimal level of Dharma (righteousness), and accountability, if to nobody else, then at least to the gods. This gives some sense of orderliness in the chaotic times of elections.

It also creates a sense, that just like different forms of the parbrahma (in it’s saguna form) Shiva, Kali, Vishnu etc, manifest a particular aspect of the ultimate reality, the sampoorna satya, and each have specialised role in the universe, similarly, different political parties are part of the same reality, highlighting its particular aspects, which may seem contradictory to each other, yet work together to maintain order and balance.

In this light, the politics of pitting Lord Ram against other deities depicts a new-low among the elites riled up by people’s voices, an attempt which is malicious at worst, and extremely ignorant at best.