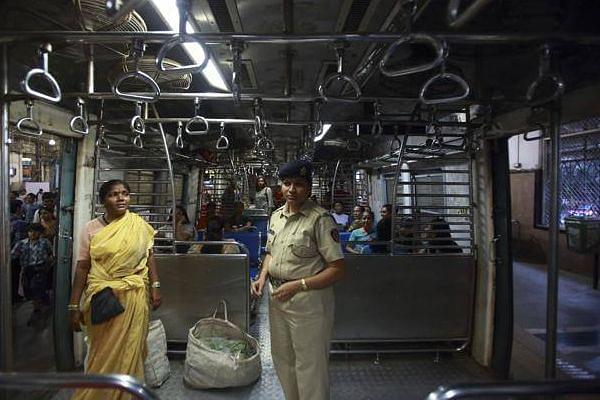 A policewoman checking an all-woman's coach for transgressions by males.

Stepping up efforts for safety of women passengers, Indian Railways has undertaken a series of preventive steps to curb crimes against them. In an action plan, the public transporter has stepped up its surveillance over identified vulnerable areas to prevent women passengers from becoming victims of harassment, molestation, chain and mobile snatching and other crimes.

In a security circular, Railway Protection Force Director-General Arun Kumar has issued detailed guidelines to prevent incidents of crime against women in trains and in rail premises.

The guidelines, issued to all authorities concerned including the Principal Chief Security Commissioners, all zonal railways, Railway Protection Special Force, Metro Rail and all production units, have drawn out a concrete plan for sensitization of all railway employees and contractual staff, assessment of vulnerability, regular monitoring of CCTV feeds and other preventive measures.

Twenty-three million passengers travel through the Indian Railways every day, out of which 20 per cent — that is about 4.6 million — are women.

In the recent past, a surge in crimes against women (including rape) in trains and railway premises has been a major area of concern.

"Therefore, the following steps as part of a focussed effort across Indian Railways need to be taken to collectively strive for the safety of women passengers and to mitigate atrocities against women in railways," the RPF DG has written.

Seeking assessment of vulnerability, the DG instructed that all the Post Commanders (PC) get details of the crimes against women including rape reported during the last five years and should analyse data thoroughly.

"The reasons for such offences, gaps in security procedure, failures of security apparatus, modus operandi of criminals involved, vulnerable section of women, places, duration day, month and year, status of investigation/prosecution of past cases, arrests made, whereabouts of criminals and their associates etc. should be carefully examined in coordination with counterparts of Government Railway Police/Local Police, Station staff and NGOs," the letter stated.

Suggesting short-term and long-term plans, it has asked for keeping a watch on suspects, regular visits to vulnerable spots by duty officers and staff during their rounds.

However, the long-term plan envisages improvement of basic infrastructure such as CCTVs, light masts, which may take a reasonable time, and which should be followed up with concerned authorities on a regular basis and till such time they fructify.

Focus should be kept on temporary minor works that can be effective in improving the situation, which may be worked out and implemented with bare minimum expenditure or with available resources.

Abandoned structures in platforms/yards, abandoned quarters,
buildings at isolated places which remain unguarded/unattended
should be demolished immediately in consultation with the engineering
department, the guidelines said.

Till such time that they are demolished, they should be regularly checked as part of the beat of on duty staff especially during night time or when the presence of people is minimal.

Yards/pits/nearby railway areas of stations must be kept clean of
unwanted vegetation, which may provide cover for concealment of nefarious activities.

Waiting rooms should not remain unattended and persons should be
allowed to enter the waiting rooms after proper entry, particularly during
nights and at times when there is minimum presence of passengers.

It should be cross checked by the duty officer at odd hours. No staff without ID cards may be allowed in trains and railway premises.

Seeking special drives to apprehend and prosecute persons
consuming alcohol in railway stations and trains, it has suggested exemplary action against railway staff involved in such offences.

The cases of crimes against women must be followed to their logical conclusion, it said.

It should be ensured that the CCTVs and Emergency Response
Systems installed in coaches are in working condition and are used properly, the letter added.