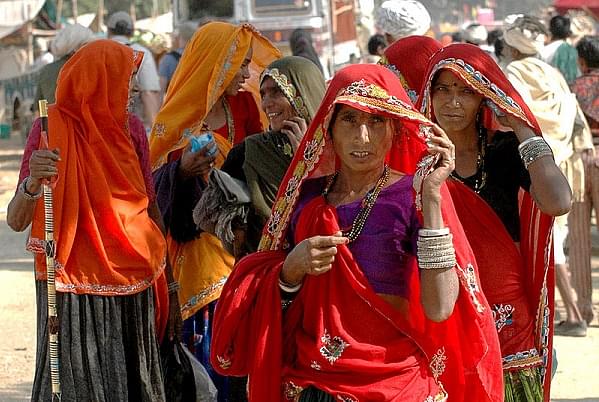 Women with the ghoonghat in Rajasthan.

The Ashok Gehlot government in Rajasthan is all set to eradicate the custom of ghoonghat.

Jaipur's district administration has kicked off a campaign to ‘eradicate’ the ‘regressive practice’ of ghoonghat, as per reports.

The campaign in Jaipur is known as "Ghoonghat Mukt Jaipur." "Mukt" means "free".

According to a Times of India report, the awareness drive will target both men and women against the custom which "stands as an obstacle to women’s empowerment."
Rajasthan, the land of brave Hindu women, who have fought for their pride against aggressors and invaders, is all set to see a new shift in gender identity involving Hindu women.

Ghoonghat, as a custom and a symbol of identity, is observed by Hindu women across castes, classes and walks of life, in and outside Rajasthan.

In November, Gehlot had called upon society to give up on the custom of ghoonghat for women’s empowerment.

Describing the tradition of ghoonghat as "पिछले जमाने की कुप्रथा (the malpractice from the bygone era), the NBT report says that the district administration in Jaipur will be running a public awareness drive against it.

There will be orientation programmes aimed at children as well, as per the TOI report.

The Gehlot government is aiming for an awareness drive towards ending "the malpractice" through campaign on WhatsApp, social media websites, schools and (women) gram sabhas, as per this report.

It adds that Gehlot has urged the people of the state to put an end to the "kupratha".

Ghoonghat — a traditional practice among Hindu women — has taken the shape of a state issue.

Not only that. "The issue" of ghoonghat will be discussed every Friday — by activists, members of women self-help groups and local women, as per reports.

According to a PTI report, the message of "ghoonghat hatao" will be part of the district collector's night chaupal.

Gehlot had, last year, commented on the custom and had said that it was important to "move with the times."

This report in the Economic Times highlighted the concerns of the local women on the possible impact of the CM's comments and moves surrounding the ghoonghat. It says:
Lado Devi says the CM’s comment would mean the women shed all their laj aur sharam (pride) which is not good for society.

The report quotes Lado Devi as saying: “If women shed the ghoonghat inside their house too, the men may object and could lead to family disputes. All is fine in cities and towns but in villages of Rajasthan, the ghoonghat has to stay."

More detail lies in a Press Trust of India (PTI) report. It mentions that rural women will be "encouraged to not wear 'ghoonghat'" when they cast their vote during the panchayat polls (to be held this month).

According to the PTI report, the idea came from the state Women and Child Development Department.

It was encouraged by Gehlot's call for "eradicating the custom" of ghoonghat or veil. There has been, however, no mention of the veil in other social and identity contexts.

The drive will involve activities surrounding district administration officials. The activities have been planned to involve "grassroots workers, public representatives, social workers...", according to an official quoted in the PTI report.

The drive built around the panchayat polls is not restricted to Jaipur. According to the PTI report, officials in Sikar "are planning to motivate rural women to start doing away with the practice during the panchayat elections."

Interestingly, the meetings held to discuss "the issue" of ghoonghat, will be discussed every Friday.

The same report has quoted Anuradha Saxena, assistant director of the Women and Child Development Department-Sikar, as saying, "Our grassroot wokers, Sathin, along with activists, members of women self-help groups and local women are holding meetings every Friday on different issues. The issue of 'ghoonghat' is being discussed on one Friday every month (sic)."

This tweet mentions a campaign to "take down ghoonghat pratha" in Bikaner district.

The debate on the issue was spiced up by a Twitter post from mythologist Devdutt Patttanaik. His claims were immediately countered.

You are wrong again!

There is presence of veil even in the earliest Indian temple art.

This is an image of a Yakshi excavated from an ancient temple site in Gandhara (2nd century CE). One can clearly see her veil. This was 500 years before Islamic religion was even born. https://t.co/O4qd2grf44 pic.twitter.com/TM3zwWaNbZ

And here is another depiction of a Yakshi (folk goddess) from Bharhut, Madhya Pradesh (2nd century BCE).

One can very clearly see her head covering. This was depicted 800 years before Islam

I could go on and on. The fact is that veils are very prominent in Indian temple art. pic.twitter.com/w6oIcXhQmJ

The issue has divided Twitter users. Many believe that the Congress-led state government is targeting a Hindu custom. Others said that BJP supporters were communalising the issue.