Rising Up To The Challenge: How Indian Railways Has Become PPE Self-Reliant 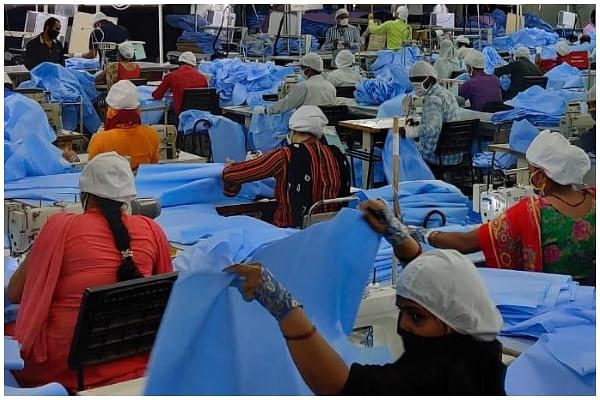 Taking up the challenge of manufacturing personal protective equipment (PPE) on a large scale to meet its own requirement, Indian Railways’ production units and workshops have produced enough coveralls, face masks, sanitisers for its entire medical fraternity, health workers and front office staff.

Besides producing and servicing coaches, locomotives and wheels, factories and workshops of the railways have manufactured 41,283 coveralls in April and 95,866 coveralls till date, making the public transporter self-reliant on PPEs.

In view of the surging coronavirus cases, the railways had ordered 5 lakh coveralls from the market earlier.

However, we could get only 1 lakh coveralls and after which we decided to go for
for mass production of PPE gear at all our production units and workshops, said a senior railway official involved in PPE procurement.

The demand for PPEs has soared with the ever increasing cases of Covid-19 in the country.

For June and July, a total of 3 lakh coveralls are expected to be manufactured at these factories and workshops.

The official further said that while the cost of coveralls ranges between Rs 800 and Rs 1,500 in the market, those produced in its factories cost Rs 550. "The quality of the coverall is certainly better than what is available in the market."

Coveralls are made following strict guidelines and after getting clearance from the authorities concerned.

"Samples are being sent to government-approved agencies for their clearance before producing them on a large scale. All prescribed parameters are followed in making these PPEs," said the official.

"About 95 per cent of our samples have passed the test and the failure rate is very negligible as we strictly follow the standard," he added.

Now the railways is meeting the requirement for PPEs in all its hospitals and dispensaries at divisional and zonal levels with its own products.

While coveralls are mainly required for doctors, medical and para-medical staff and health workers, sanitisers and face masks are generally being used by the railway employees at workplaces across the country.

The railways has about 60 hospitals at divisional level and 15 central hospitals at zonal level, and all production units have their medical wings.