Sabarimala Case: What The ‘People For Dharma’ Lawyer, Who Left The Supreme Court Spellbound, Had Argued 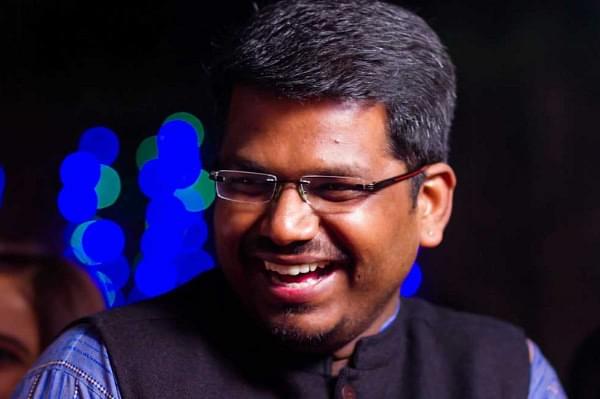 A Supreme Court bench today (14 November) referred its ruling on the entry of women into Sabarimala temple to a larger bench. The apex court bench, headed by Chief Justice of India (CJI) Ranjan Gogoi, ruled that a seven-judge bench, to be constituted by Justice Sharad Arvind Bobde, who will take over as the CJI after Gogoi’s retirement on 17 November, will look into the case.

With the case back in the limelight, here’s what lawyer J Sai Deepak, who was in favour of preserving the ancient tradition in Sabarimala, had argued before the top court.

The lawyer, who appeared on behalf of a non-profit organisation called ‘People for Dharma’, one of the respondents in the case, made forceful arguments in the court which took the social media by storm.

Sai said that from the language of Article 25(1), it is evident that the rights of any worshipper under the said article are subject to the rights of religious institutions under Article 26 and, therefore, the former cannot claim to have better rights than the latter.

Sai then referred to various judgements of the Privy Council and the Supreme Court of India establishing that a deity has juristic character and is thus a legal person and, therefore, can enjoy rights under articles 21, 25(1), and 26.

Sai submitted that the deity has rights to practise and preserve its Dharma, including its vow of Naishtika Brahmacharya under Article 25(1) and has the right to expect the privacy of that character under Article 21. He further stated that it is the vow of the deity that is implemented as the tradition of the Sabarimala Temple, which, therefore, brings into the picture rights under Article 26(b).

Sai argued that the issue in the petition was not about “temple vs women” or “men vs women”, but “men vs men” and “women vs women”. If the petitioner’s contention were allowed, then men who don't observe the 41-day vow can also claim right of entry into Sabarimala Temple citing Article 25(1). A Hindu might say that he wants to offer chicken to Lord Ganesha citing Article 25(1) and so on.

On the charge of discriminating against menstruating women, Sai submitted that the primary object of the religious practice was to preserve the celibate form of the deity and not exclusion of menstruating women. The latter follows from the former. Sai put evidence from the religious texts before the bench, establishing the celibate nature of the deity.

Sai stated that the discrimination charge would have been justified had the entire focus of the temple and its practices was to keep “all women” out, but that’s not the case. All exclusion is not discrimination, especially when the object of the rule has nothing to do with misogyny or impurity of menstruation, he said.

On the issue of whether the Sabarimala Temple was being maintained out of the funds drawn from the Consolidated Fund of India, Sai placed before the court the 1922 proclamation of the erstwhile Maharaja of Travancore, where, in return for taking over the lands of the temples in Travancore, he had declared to pay an annuity of Rs 16 lakh for the running of the temples in the Travancore Devaswom. This obligation was inherited by the Indian state since it took over the temple lands from the princely state. Therefore, it’s incorrect to state that the Sabarimala Temple was being run by state funds and, therefore, were state bodies.

Sai was granted 10-15 minutes’ time in the forenoon to put forth his submissions. However, he argued for more than one-and-a-half hours without being asked by any of the judges to stop. This is a testament to the quality of his argument and rhetoric.

Justice Nariman observed that Sai Deepak’s submission was instructive. The Chief Justice commented that not only was it instructive but was an impressive articulation with both rhetoric and logic. “Your arguments are impressive, I must admit that,” he said.