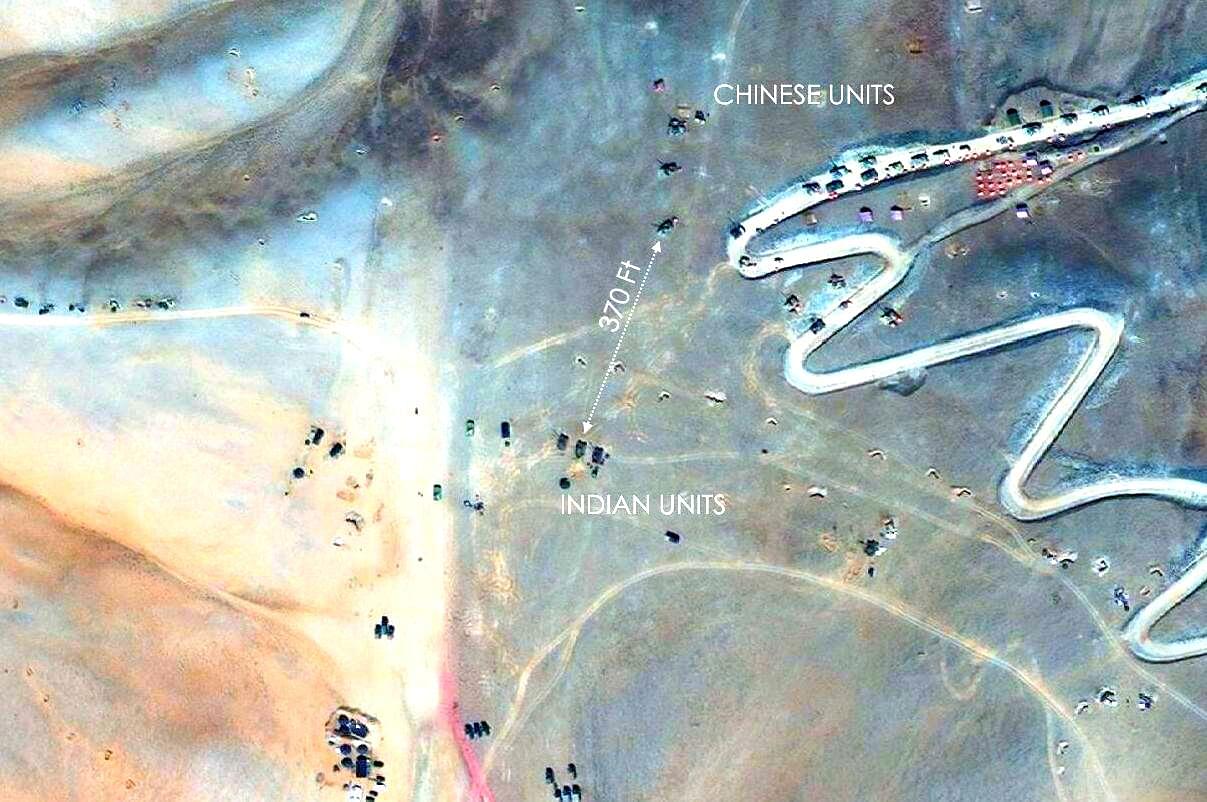 In an interview earlier this year, Lieutenant General Y K Joshi, the General Officer Commanding-in-Chief (GOC-in-C) of the Indian Army’s Northern Command, had revealed that India and China were on the “brink” of an armed conflict in eastern Ladakh after India took control of the Kailash Range in August 2020.

“We were on the edge...we were absolutely on the brink,” Lieutenant General Joshi told News18 in February this year, adding, “On the 31st [August], when the PLA [People’s Liberation Army] wanted to come right up to the Kailash range, that was the time the situation was extremely, extremely tense.

“...war was averted,” the GOC-in-C of the Army’s Northern Command said.

Now, satellite imagery shows that Indian and Chinese forces were only a few hundred feet apart at some points on the Kailash Range.

Indian and Chinese tanks were positioned less than 500 feet apart at Rezang La, one of the peaks that Indian forces took control of in late August 2020.

Satellite imagery from January 2021, posted on Twitter by open-source intelligence handle @detresfa_, shows Indian and Chinese armour at Rezang La was only separated by a distance of around 370 feet, with turrets of the tanks facing away from each other. Other military vehicles and structures, including tents for troops, can also be seen in the satellite image.

On the intervening night of 29 and 30 August, the Indian Army, aided by commandos from the Special Frontier Force, a unit manned by volunteers from the Tibetan refugee community, captured the heights of the Kailash Range.

India’s move came after it was convinced that the People’s Liberation Army will not give up its gains on the north bank of Pangong Tso unless compelled.

Occupying the territory which it did not control gave India a mountain-range sized bargaining chip at the negotiating table with China.

Indian and Chinese forces disengaged from the heights on the Kailash Range and the north bank of the Pangong Lake in February this year after the two sides reached an agreement on pulling back forces in these areas.

However, the standoff in eastern Ladakh between Indian and Chinese forces continues at other friction points, including Gogra and Hot Springs.

While Indian and Chinese troops disengaged from the Kailash Range and the Pangong Lake, forces remain deployed in large numbers in the depth areas.

“As of now, the troop levels continue to be what they were at the height of the standoff,” General Naravane said last month.

“Disengagement has happened but there has been no de-escalation. So that’s why the troop strength, the numbers in that whole area of the northern front, and when I say northern front, it is not just Eastern Ladakh, the whole front, right from Ladakh down to Arunachal. So, the whole front will see this enhanced presence till such time that we keep talking and the de-escalation happens,” the Army Chief said, hinting at a new normal along the Line of Actual Control.