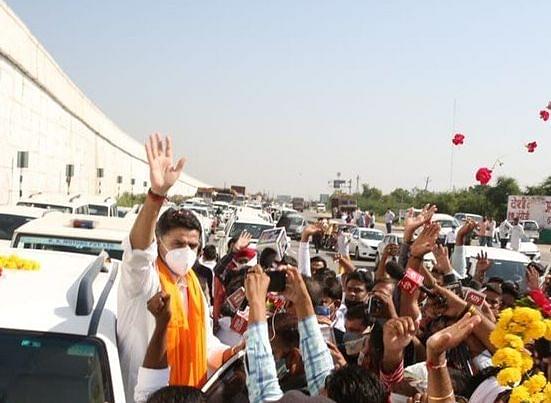 Senior leader from Congress Sachin Pilot has announced that he will campaign in Bihar for the upcoming assembly election. He has said that the Grand Alliance -- which includes his own party and the RJD, will be a winner.

He alleged that the Narendra Modi government makes schemes for the benefit of industrialists.

Taking a dig at Bihar chief minister and JD(U) President Nitish Kumar, he said that Kumar's claim of "good governance" has been exposed. Pilot mentioned the migrant issue which emerged during the Covid-19 lockdown.

"He did not care for the labourers and students who were stranded outside Bihar during the COVID-19 lockdown," he added.

Pilot is one of the 30 star campaigners including the Ghulam Nabi Azad.
Pilot, who is former deputy minister of Rajasthan and one of the dissenting MLAs in the state against Ashok Gehlot earlier this year, has said that the party will form boards in all municipal corporations in Rajasthan.

During the period of dissent against Gehlot that had led to turmoil within the Congress, Pilot's stance and actions triggered speculation in sections of the media that he will join Bharatiya Janata Party, much like his peer Jyotiraditya Scindia. Pilot stayed in Congress.

Scindia is campaigning hard for his party candidates for the forthcoming by polls. The BJP has given a ticket to MLAs who had walked out of Congress in Scindia's support.

Pilot's name has figured as one of the campaigners for the Madhya Pradesh bypoll and he is being given a role in Bihar as a campaigner.

This report says, "Sachin Pilot is also expected to campaign in the region that is the stronghold of his friend and former colleague Jyotiraditya Scindia. Pilot’s inclusion as star campaigner has aroused interest because of his recent rebellion against the party."

Civic body elections will take place in Jaipur, Jodhpur and Kota on 29 October and 1 November.