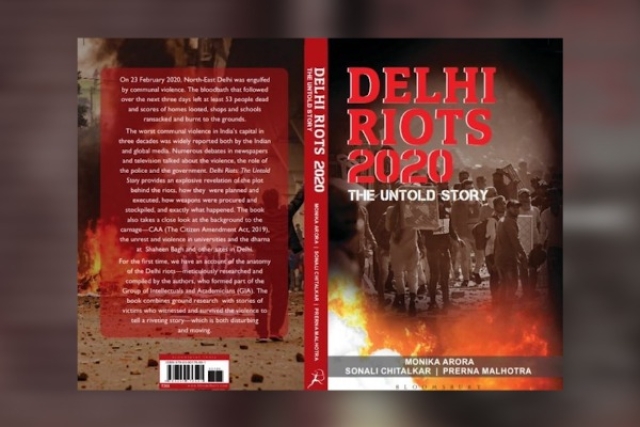 (The cover of the book that has been withdrawn)

Bloomsbury India caused great controversy Saturday evening (22 August) after it announced that the publishing company will withdraw a book on Delhi riots.

The book titled 'Delhi Riots 2002: The Untold Story', written based on ground investigations and interviews, was withdrawn citing the reason of the authors organising a pre-launch event without the knowledge of the publishers. Bloomsbury also said that it did not 'approve of' the participants of the pre-launch event.

The book has been authored by Monika Arora, Sonali Chitalkar and Prerna Malhotra.

Earlier, a large number of controversial left-leaning activists carried out a campaign on social media using hashtags such as #ShameOnBloomsburyIndia for agreeing to publish the book and because leaders such as Kapil Mishra were attending the pre-launch event. There were also calls for globally well known authors to boycott the publisher.

Notably, neither the publishers nor the activists cited any factual inaccuracy or factual errors in the book while withdrawing or demanding withdrawal of the book. Further, Bloomsbury India's statement described the book as "purportedly giving a factual report on the riots in Delhi in February 2020".

The announcement from Bloomsbury simply said that "...in view of very recent events, including a virtual pre-publication launch organised without our knowledge by the authors, with participation by parties of whom the publishers would not have approved, we have decided to withdraw publication of the book."

Defending its decision the publisher also added that it "supports freedom of speech but also has a deep sense of responsibility towards society."

Following the sudden withdrawal of the book by Bloomsbury India several well known authors have said that they would not work with the publisher.

Sanjeev Sanyal, Principal Economic Advisor, said that "this is obviously not a quality control problem but about censorship." He tweeted saying that he had raised the issue of how "a tiny cabal controls Indian publishing and constantly imposes ideological censorship".

Acclaimed polemicist, scientist and Swarajya Consulting Editor Anand Ranganathan said that if Bloomsbury "does not retract its decision" he and his coauthor would return the advance paid to them for a forthcoming book on Indian scientists.

"I am appalled to see @BloomsburyIndia, publisher of two of my books, buckle under threats by fascists and withdraw the book Delhi Riots – 2020. I stand in complete solidarity with the authors. This is an assault on Freedom of Expression and on those who cherish this freedom.", he said on Twitter.

Kanchan Gupta, one of India's well known columnists, said that Left-liberals and Islamists were joining hands to impose their 'vile cancel culture' of silencing voices' and forcing cancellation of publication of books.

Several readers and other authors have also come forward saying that they would continue to not publish or buy from Bloomsbury in light of the withdrawal.