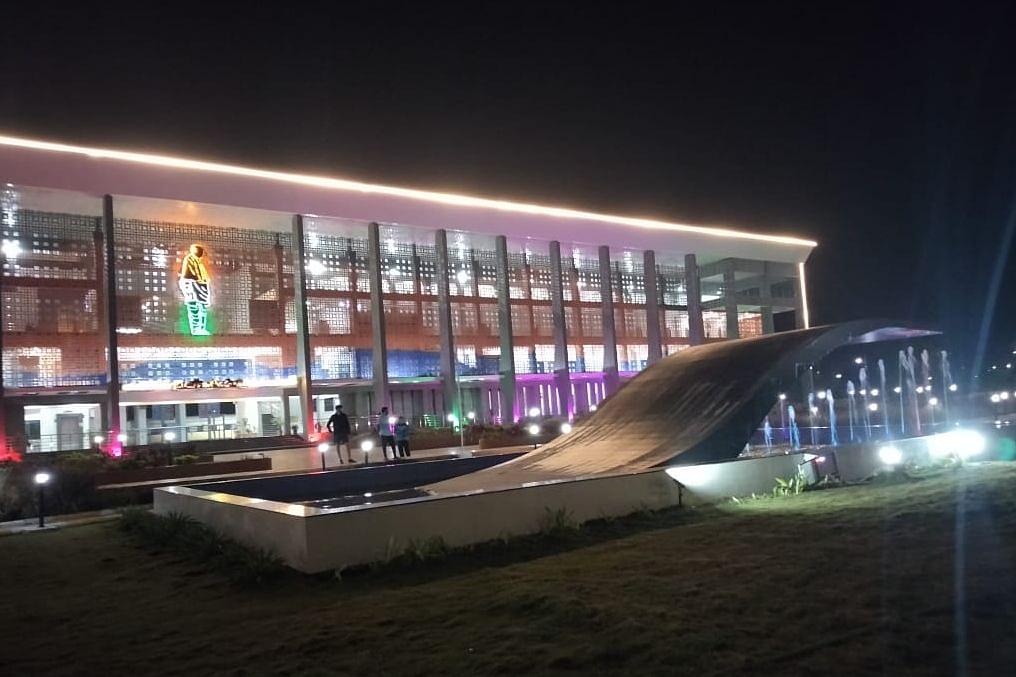 Braving the pandemic, heavy monsoon and many other related hurdles, Kevadiya rail connectivity with the new premise, now known as Ekta Nagar Station, is now fully operational offering seamless connectivity to passengers to visit the 182-metre Statue of Unity, the world's tallest statue, dedicated to Sardar Vallabhbhai Patel, the architect of Independent India.

Constructed at a faster pace, the newly-built station has become India's first railway premise to become a green building connecting southern, northern, eastern and western parts of the country with about 10 train services.

Certified by the Indian Green Building Council, the green station has come up in a record time after the land acquisition of 220 hectares for the new rail project in August 2018.

Land acquisition for the new line Pratapnagar-Ekta Nagar project was completed as late as July 2020 and the project is now getting commissioned within five months at a total cost of about Rs 800 crore.

Aiming at providing cleaner, greener, faster and environment friendly rail transportation, the 84 km long Pratapnagar-Ekta Nagar (Kevadiya) section has been electrified as per the Railways Mission of 100 per cent electrification policy to reduce carbon footprint.

It has a total of seven stations with three major (crossing) stations and four minor (halt) stations.

Out of these four are new stations — Moriya, Tilakwada, Garudeshwarand Ekta Nagar, and three are existing stations, namely Dabhoi, Vadaj and Chandod.

Using modern technology and state-of-the-art machinery, the Ekta Nagar Station was commissioned on 17 January 2021, with solar power, LED lights, rain water harvesting, sewage treatment plant and glass bricks among others, the station are now having about 1,000 footfalls daily.

According to the Western Railway official, glass bricks have been used as part of the facade element. These glass bricks act as a thermal barrier, significantly reducing heat loss in winter and heat gain in summer.

Autoclaved Aerated lightweight blocks were used for masonry works for overall building and circulating area. These blocks have fly ash content which makes it a green product with reuse of waste.

Another novel concept is the use of glass reinforced concrete (GRC) grills as the main facade element with a combination of glass bricks.

This being lightweight, reduces load on structure. It is also a sustainable material and has good thermal resistance and also ensures circulation and ventilation, the official added.

The first two levels of the station have passenger facilities such as AC waiting rooms and VVIP lounge. The third-level houses a viewing gallery from which tourists can have a good view of the Statue of Unity and; a tribal art gallery is also being developed here.

A 12-feet tall replica of Statue of Unity is installed at the prime location of the station circulating area. It is also designed by the same sculptor Ram V Sutar who designed and created the Statue of Unity.

Garden landscaping has been done with the local saplings and plants with use of organic manure. The lush green garden spans across 4,000 sqare metres in the circulating area of the railway station. The circulating area is paved with paver blocks which ensure high thermal resistance.

In a boost to both domestic and international tourism, Ekta Nagar (Kevadiya) Station is located just 6.5 km away from the Statue of Unity. The alignment passes through the tribal belt of Vadaj-Chandod-Moriya-Tilakwada-Garudeshwar and bringing development to the area/region.

It also provides connectivity to important religious and ancient pilgrim places nestled on the banks of the river Narmada such as old temples at Karnali, Poicha and Garudeshwar.

Providing seamless rail connectivity to the world’s tallest ‘Statue of Unity’ from various directions of the nation, the rail project station acts as a catalyst for overall socio-economic development of the region generating new employment and business opportunities.

Land acquisition for the new line project was completed as late as July 2020 and the project is now getting commissioned within 5 months.

Giving credit for the completion of the project in record time to the dedicated workforce of the Railways, Western Railway CPRO Sumit Thakur said: "These were indeed most challenging times with the threat of Covid-19 pandemic all around us. Despite these hurdles, our people worked bravely and sincerely continuing the infrastructural work and development works relentlessly."

He further said: "The workforce consisting of our engineers as well as contractors was motivated to resume work by following all the stipulated protocols of Covid-19 with an aim to complete the project within the set deadline."