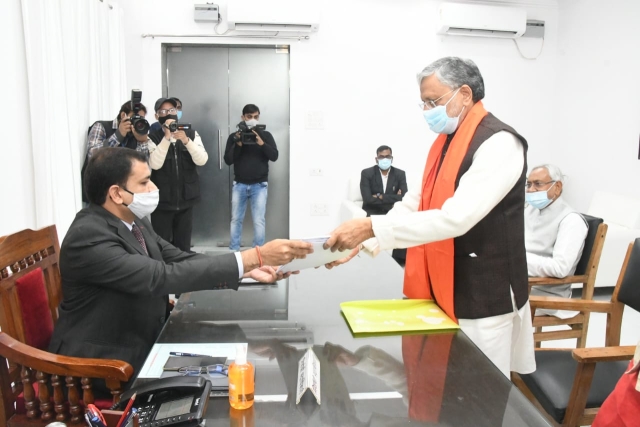 Bihar Chief Minister Nitish Kumar has backed his nomination and has said that Modi has his full support.

With the passing away of Lok Janshakti Party leader Ram Vilas Paswan, the Rajya Sabha seat has been vacant. Paswan was a minister in the Narendra Modi cabinet.

Paswan was sent to Rajya Sabha from Bihar after the 2019 Lok Sabha polls. He was Minister of Consumer Affairs, Food and Public Distribution — a portfolio that's likely to go to Modi.

Modi is likely to get elected to Rajya Sabha unopposed as the other sides, including Rashtriya Loktantrik Party (RLP), have not fielded candidates.

Rashtriya Janata Dal (RJD) had offered to support the LJP for the Bihar Rajya Sabha seat for Reena Paswan, who is Chirag Paswan's mother. However, Chirag Paswan thanked the RJD politely for their gesture and turned down the offer.

Chirag Paswan has been quoted as saying: "I appreciate the gesture made by the RJD and the consideration shown by them for us. But my mother is not interested in entering politics as of now."

This means that Modi has no one to challenge him so far for the election to Rajya Sabha.

At the filing of his nomination, the other leaders present were those from the smaller constituents of the National Democratic Alliance (NDA): the Hindustani Awam Morcha and Vikassheel Insaan Party — Jitan Ram Manjhi and Mukesh Sahni.

Modi is expected to win the election unopposed — unless the RJD-led Mahagathbandhan declares a candidate and files nomination by 3 December for the election to be held on 7 December.

Modi was replaced as the deputy chief minister after the NDA came to power in the Bihar assembly polls recently.

At the filing of Modi's nomination, Nitish Kumar said that he has come to congratulate his former colleague (Modi).

Kumar added that with his nomination to the Rajya Sabha, Modi will hold the distinction of having been a member of the Parliament in both houses as well as the state legislature.

Kumar revealed what his wish regarding Modi's role in the state is "known to everybody" and hinted that Modi may get a role at the Centre soon.

He has been quoted as saying: "Our wish is known to everybody. But, now that they want to take him to the Centre, we are hopeful that in his new capacity he will continue to serve Bihar."

With the support to Modi in the filing of his nomination from the constituents of the NDA, the expected role at the Centre, and the positive tone from Bihar Chief Minister Nitish Kumar in his support, the Modi of Bihar seems confident as a candidate prepared for a bigger role.