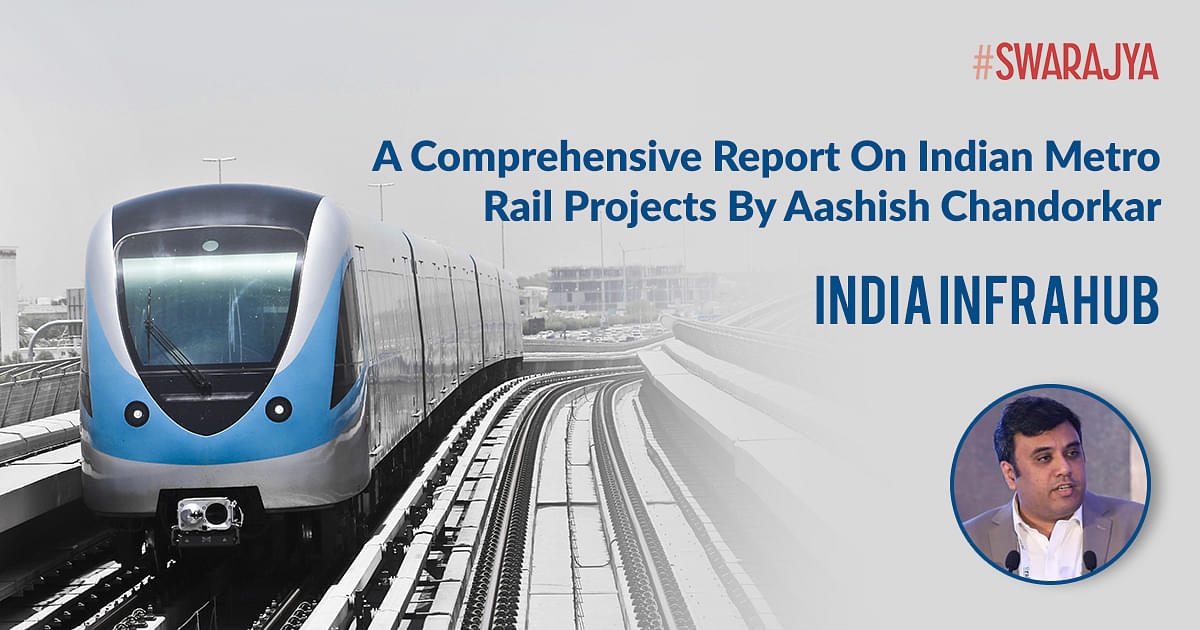 Swarajya and India Infrahub is delighted to publish its maiden research report on Metro Rail Systems in India.

Authored by one of India’s leading public policy commentator Aashish Chandorkar, it is a comprehensive report on Indian metro systems analysing the growth story of metro systems in Indian cities and implementation lessons that can be taken from previous projects.

The report will be formally launched during Infranirbhar Webinar Series, a multi-part webinar series on Indian Infrastructure beginning Feb 22.

The complete report can be downloaded here.

Indian cities are by far the fastest growing urban centres in the world today. The exponentially growing urban population has put a huge pressure on existing urban transit infrastructure, and state has been often slow in responding to such growing demand with Mass Rapid Transit (MRT).

Though the earliest MRT in India was seen as early as 1984 in form of Kolkata metro, but the need for fully fledged MRT across major cities have been realised quite late due to multiple reasons related to governance, land procurement & pooling, contract enforcement, technical abilities etc.

With the commissioning of the Nagpur Metro’s 11-kilometre (km) long section early this year, around 678 km of the metro network has become operational in India.

Apart from Delhi, Kolkata (the first city to get a metro) and Nagpur, metro stretches are now operational in Chennai, Bengaluru, Hyderabad, Cochin, Lucknow, Jaipur, Gurgaon, Mumbai, Noida, Ahmedabad and Nagpur. Around 400 km of this network has been completed in the last five years.

During the period between 2014 and 2019, 13 new metro projects with a total length of about 248 km have been approved for implementation. Further, about 750 km of metro rail network and 373 km of rapid rail transit network is under planning in various cities.

The government has doubled-down on its efforts to extend the metro network in cities that have operational stretches, and to others that have none. It has raised budgetary allocation by over 158 per cent to Rs 42,696 crore in the 2015-18 period from the previous Rs 16,565 crore allocation for the 2012-15 period.

Given that the government of India plans to build 1985 kms in the next five to seven years by investing an estimated Rs. 6838 billion, the report will also looks at major aspect of metro infrastructure, i.e. financing and comments on multiple financing models and need for better financing models, cross comparative study of various metro systems in India, their governance, financing and operating models, takeaways from which will be useful in envisioning metro transit in Indian cities.