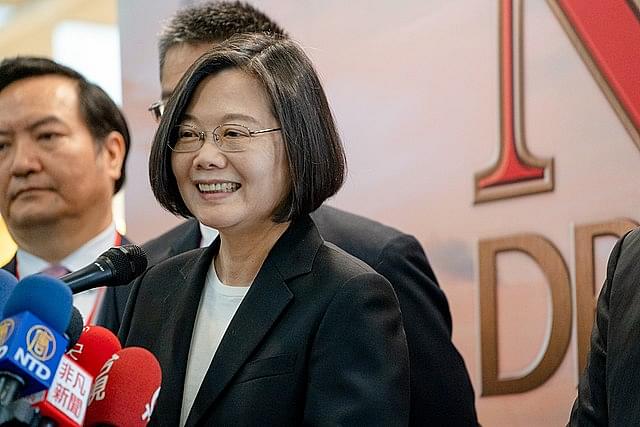 Taiwanese President Tsai Ing-wen has acknowledged for the first time that there are U.S. troops deployed inside her country and also expressed confidence that the United States would help to defend the island in the event of an attack by China.

In an interview to CNN's Will Ripley on Wednesday, Tsai pointed out that Taiwan had a “wide range of cooperation with the US aiming at increasing our defence capability”.

To a pointed question by Ripley on the number of American soldiers currently stationed in Taiwan, Tsai tacitly acknowledged their presence by responding "Not as many as people thought." Tsai also indicated that US troops were training local forces on the island.

Tsai stressed the need to expedite Taiwan's military reforms to improve the country's ability to defend itself. She reasoned that given Taiwan's smaller military relative to China, the key is to develop its asymmetric warfare capabilities.

The US currently has no official diplomatic relations with Taiwan, but is required by law to help defend Taiwan militarily in case of Chinese aggression, including through arms sales.

When asked if she had confidence that the U.S. would defend Taiwan if China attacked, Tsai said, "I do have faith given the long term relationship that we have with the U.S. and also the support of the people of the U.S. as well as the Congress, and the administration has been very helpful."

On an earlier occasion, Tsao warned of “catastrophic consequences” if Taiwan were to fall to China. She reiterated that Taiwan is committed to defending itself if its democracy is threatened.

Earlier this month, Taiwan's Minister of National Defence Chiu Kuo-cheng today (Oct 6) warned that China will be militarily capable of launching a full-scale invasion of Taiwan by 2025.

As per Taiwanese Defence ministry, 672 PLA airplanes have flown into Taiwan’s air defence identification zone this year. In the first five days of October, a total of 150 Chinese aircraft entered Taiwan airspace, with 56 planes on Oct 4 the largest ever number of incursions in a day.

"China has the capability to invade Taiwan now," and will be capable of mounting a full scale invasion by 2025, Chiu informed reporters before a legislative session convened to review a special military budget, when asked if China would be capable of invading Taiwan by 2025.

The current tensions across the Taiwan Strait "are really the grimmest I have seen in more than 40 years of military service," Chiu said during a joint session of lawmakers.

While noting that invading Taiwan right now would incur a high cost for China, by 2025, Chiu noted that Beijing would be able to lower that cost and launch a full-scale invasion.