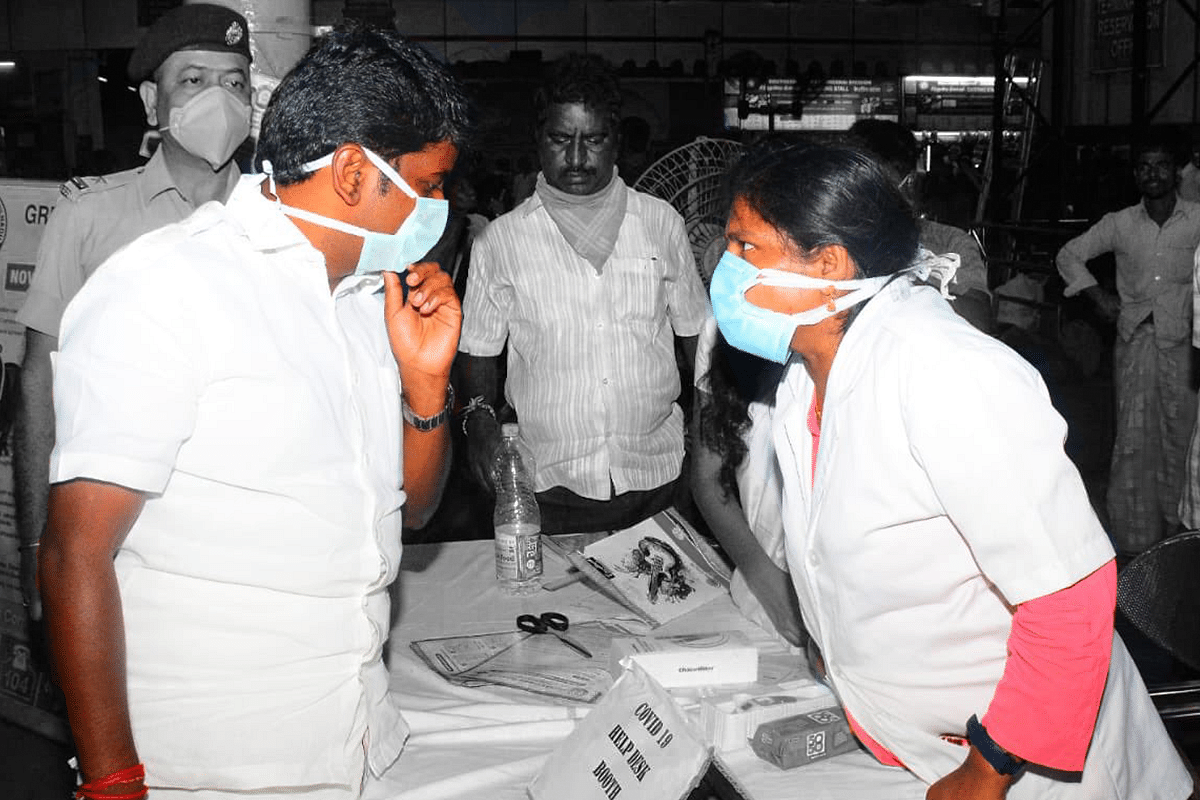 In April 2017, Income Tax Department officials had raided his residence in Chennai besides premises of various people with whom he has had some dealings.

The raid came five days ahead of the by-elections to the R K Nagar Assembly constituency from where T T V Dinakaran, leader of the Amma Makkal Munnetra Kazhagam, who was expelled from the ruling AIADMK, got elected.

In March 2018, he got involved in another controversy over a remark he made against a woman journalist.

He name also figures in the ‘gutkha scam’ in which he allegedly received kickbacks from manufacturers of tobacco-based products.

The Central Bureau of Investigation (CBI) conducted search operations at the residences of the minister and others, including police officials, who are allegedly involved in the scam.

But there has been a swing in his fortunes, for good, since last year. Now, Baskar’s proactive role in the fight against the coronavirus pandemic has won plaudits.

In February last year, when Baskar was returning home after attending a function in Pudukottai district, he rescued an accident victim and took him to hospital in his escort vehicle. Ironically, the person who met with the accident was a member of the Dravida Munnetra Kazhagam (DMK).

The current coronavirus outbreak has, perhaps, brought out the best in him. He has ensured that the state Health Department stayed alert right from the time news broke out about the virus wreaking havoc in China.

On 31 January, his department officials were asked to maintain a strict vigil at the Chennai airport on those arriving from abroad. Subsequently, a group of 78 Chinese were screened for Covid-19 before they were declared of being free of the virus.

A person said on social media that the minister has led from the front and kept the entire Health Department on its toes. He even called his leadership “stellar”.

Despite odd lags, the state had done a wonderful job, said another, while a few others termed his work as “extra-ordinary”.

While the Health Department officials carried out a lot of sanitation work, the lower-level staff have conducted door-to-door campaigns to make the people aware about the virus.

Along with that, they have also been checking if there was anyone who had returned from abroad and showing signs of being a coronavirus carrier.

In fact, the AIADMK IT wing in a tweet called for a mindset to applaud the role of the state Health Minister.

“We praise Andhra (Pradesh Chief Minister YS) Jagan (Mohan Reddy) if he does something good. We laud Delhi (Chief Minister Arvind) Kejriwal. How many among us have the mentality to laud the role of our Health Minister who has been toiling 24x7?” the IT wing wondered.

Some of his supporters point out that from dawn to late in the evening, Baskar does rounds of various places, starting from the airport to the Rajiv Gandhi Government General Hospital, where the coronavirus patients are lodged.

“On 16 March, the Minister chaired a review meeting from 8 pm to 11 pm at the airport on tackling the grim situation arising out of the pandemic virus,” a supporter said.

Besides, he is carrying out regular inspection of the health screening facilities for the quarantined patients, and at the airport, where passengers are being screened.

Besides, he holds periodic meetings with the Indian Medical Association members. On 20 March, he secured an assurance from the State Chemists and Druggists Association that its members will not hike the prices of medicine.

In addition, his handling of the media has come in for praise. The minister has also ensured the social media is made optimum use of to make the people aware of the protocol they need to follow and other measures to ward off the health threat.

Photographs showing Baskar wearing a mask and speaking to a patient on quarantine or discussing with medical teams or supervising the screening of passengers at the airport are doing rounds on social media.

Not surprisingly then on Sunday (22 March), when the people across the country stood in their balconies or outside the homes to applaud the splendid service of doctors, medical workers and health department staff, a few social media users said they were also applauding Baskar’s role.

Nine people have tested positive for Covid-19 in Tamil Nadu. Another 89 have been placed in isolation wards with nearly 2.10 lakh passengers being screened.