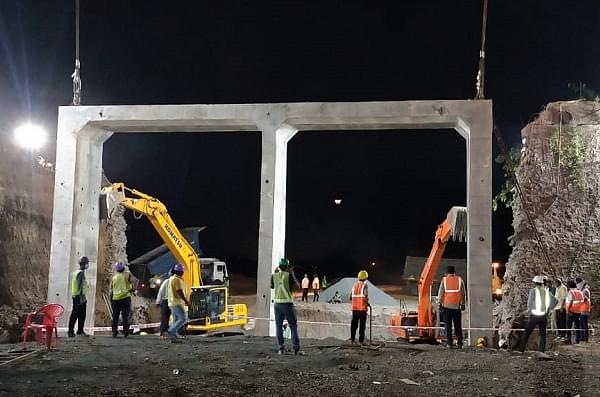 Team DFC at work on the Valsad ROB in Gujarat.

Looking at difficulties during the pandemic as an opportunity for transformation, Team DFC has initiated an innovative out-of-box approach to complete the work on the Valsad Road Over Bridge (ROB) in Gujarat on the Western Dedicated Freight Corridor with minimal traffic disruption.

Since the Covid-19 pandemic has impacted construction activity, work in the Vaitarna–Sachin section of the Western DFC faced a bottleneck — where crossing an ROB near Valsad town in south Gujarat was difficult.

The ROB work could not be started due to various limitations, as track laying activities using state-of-the-art New Track Construction (NTC) machines would have been affected.

However, taking up the challenge, Team DFC came up with an out-of-box solution on the Valsad Road Over Bridge (ROB) issue.

The biggest challenge in doing this work was the road traffic block, as this ROB is one of the busiest passages into the city of Valsad from Mumbai-Delhi highway.

The whole work is planned to be completed in 20 days. Working in tandem with various government agencies and the civil administration, the ROB, which funnels busy traffic into Valsad from the Mumbai-Delhi highway, was sought to be completed by ensuring a 20-day traffic block on 2 June 2021.

According to DFCC, a solution proposed was to insert a twin precast box of 16m x 10m size on the approach of the ROB to take the NTC forward through it.

Extensive arrangements were made for precasting these huge segments. Despite lockdowns and travel restrictions, a team of approximately 150 workers including senior engineers toiled day and night to finish the casting works. The road traffic block was granted by the district administration of Valsad, responding favourably to the proposal.

A senior DFCC official said the road traffic block of 20 days commenced on June 2 and the work is progressing well as per planning.

Four heavy-duty hydraulic cranes having a capacity varying from 300 MT to 500 MT have been mobilised for installation of these segments. The precast segments are too big and heavy to handle without causing any internal stresses during handling.

The project team has designed a special carrier using a multi-axle trailer fitted with a steel platform on it. The fabrication of the steel platform was completely done at site even during the period when the industrial oxygen supply was prohibited in the country.

The team could overcome all such constraints by continuously striving for alternatives and by taping the collective wisdom and experience of the team.

DFCC officials stated that they are hopeful of completing the works within the traffic block period during the trying times of this pandemic. When the NTC track laying machine wheels forward from the north end of Valsad ROB to the south end, it is another firm step towards the commissioning of the DFC — one of the largest infrastructure projects of modern
India.

In order to make India a five trillion USD economy, it is essential to develop transport networks at the same pace. Development of transport infrastructure will give a major fillip for the growth of industries, commerce, exports and imports.

The DFCC has been set up as a special purpose vehicle to undertake planning, development, mobilization of financial resources, construction, maintenance and operation of Dedicated Freight Corridors.

In the first phase, the organisation is constructing the Western DFC (1506 Route km) and Eastern DFC (1875 route km including PPP section of Sonnagar-Dankuni section. The EDFC starting from Sahnewal near Ludhiana (Punjab) will pass through the states of Punjab, Haryana, Uttar Pradesh, Bihar and Jharkhand to terminate at Dankuni in West Bengal.

The 2,800 Km route of the whole WDFC and EDFC (excluding the Sonnagar – Dankuni PPP section) is expected to be commissioned by June 2022.
DFCC aims to decongest the existing Indian Railway network and increase the average speed of goods trains from the existing 25 to 70 kmph.

The DFC is also expected to increase the rail share of goods transport from the existing 30 per cent to 45 per cent.