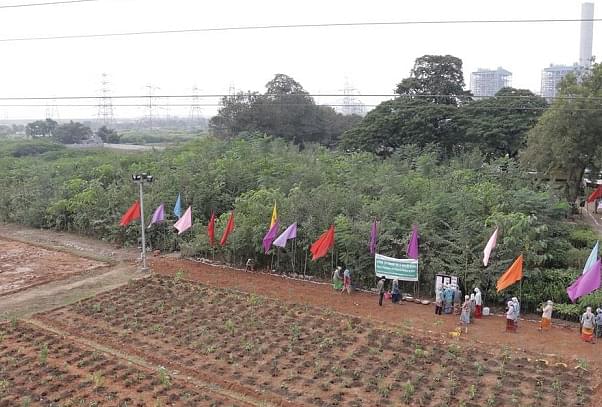 Next phase of mini forest plantations at Ramagundam (NTPC)

An initiative by National Thermal Power Corporation (NTPC) using Miyawaki plantation has succeeded in developing a mini forest amid the concrete jungle in Telangana's Ramagundam, known for blazing summers.

The mining town in Peddapalli district is also known as Agnigundam (furnace) for the scorching heat it experiences every summer with the highest temperature even touching 50 degree Celsius.

The Miyawaki project launched by NTPC-Ramagundam early last year at its oxidation pond has developed into a dense forest with 100 per cent survival and set an ideal example of urban foresting.

The phase I and II of the project covers over 7,662 square meters with a plantation of around 14,034 trees.

The Miyawaki method of afforestation, pioneered by Japanese botanist Akira Miyawaki, has revolutionized the concept of urban afforestation by turning backyards into mini-forest.

Experts say this method is ideal for urban spaces where a few cents of land can be set aside to increase the green cover.

For the first time NTPC came forward to use this unique technique to develop a dense native forest in an urban area.

Under the Miyawaki method, dozens of native species are planted in the same area, close to each other, which ensures that the plants receive sunlight only from the top and grow upwards rather than sideways.

In January last year NTPC launched the project, covering over 1,400 square metres having around 2,900 trees of 53 varieties.

Officials from district administration and forest department and hundreds of students from four NTPC township schools participated in the massive plantation.

Developed in association with Peddapalli district administration and the forest department and executed by the Telangana State Forest Development Corporation Limited (TSFDCL), the project involves a scientific way of planting.

After selecting a location based on soil quality, water availability and secured boundary wall, an area is dug up to 0.60 metres depth and followed by filling with various layers of rice husk, farmyard manure, cocopeat and 'Jeeva Mutram'.

Subsequently, planting points are marked at a grid of 0.75M x 0.75M and then species of high canopy (16 varieties), medium canopy (19 varieties) and low canopy (18 varieties) are planted.

Zero usage of chemicals and fertilizers inspired the authorities to go for the Miyawaki technique. This ensures a cent per cent native, organic and natural plantation within a short time.

NTP's efforts in enriching the environment through innovative techniques have come in for praise from state officials, who hoped that this pilot project would encourage others to come forward.

NTPC officials are closely monitoring the progress and documenting it so that it can be replicated on a large scale in other areas, too.

TSFDCL officials termed it as a model for others to follow. They lauded NTPC's efforts under CSR for social development and environment protection.

They believe that the growth coupled with flowers and fruits in 10 months is a boost for urban foresting.

A total of 8,003 saplings of 54 varieties were planted covering 4,176 square meter area. Belonging to RMC, the park was filled with ash and bushes and the same were removed and filled with red soil suitable for plantation. This phase has also been taken up in association with TSFDCL.

The success of the two phases and the launch of the third is definitely showing a new way for urban foresting.

Impressed by the work done by NTPC-Ramagundam, police in neighbouring Karimnagar district have also taken up plantations with Miyawaki method at some of their campuses in Karimnagar town.