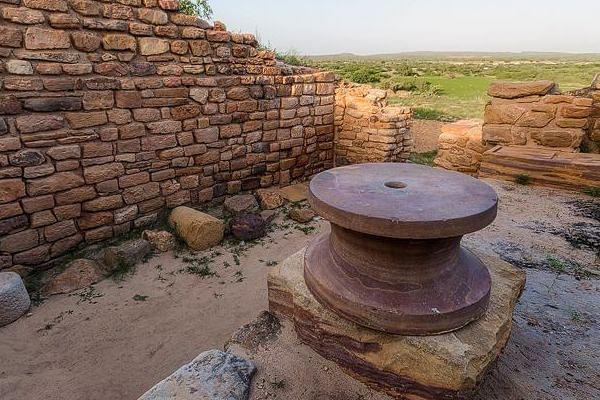 A recent study by the researchers at Indian Institute of Technology Kharagpur (IIT-Kgp) points to the fact that the decline of Dholavira - a Harappan site - might be linked to drying up of a mighty Himalayan river flowing through the Rann of Kutch.

As per the release by the institute, the study has just been published online in prestigious Wiley Journal of Quaternary Science.

The statement said that a research team “connected the dots between the growth and decline of Dholavira, the most spectacular and largest excavated Harappan city in India located in the Rann with a river which resembles the mythical Himalayan river Saraswati”.

The study dated archaeological remains from all the stages and also inferred climate shifts through time which led to the rise and fall of the Harappan city.

The study concluded that a mighty river like Saraswati - as mentioned in the Rig Veda - flowing from the Himalayas to the sea - might have been the life source of the Harappan civilisation.

“Our data suggest that prolific mangroves grew around the Rann and distributaries of Indus or other palaeochannels dumped water in the Rann near southern margin of Thar Desert. This is the first direct evidence of glacial fed rivers quite like the supposedly mythological Saraswati, in the vicinity of Rann” said IIT Kharagpur's Anindya Sarkar and the lead researcher.

“Though the Dholavirans adopted excellent water conservation strategy by building dams, reservoirs and pipelines, they were pushed to the limit by a catastrophic mega-drought collapsing the city due to the drying up of the river,” he said.

The team from the PRL Ahmadabad dated the carbonates from human bangles, fish otolith and molluscan shells by accelerator mass spectrometer and found that the site was occupied from pre-Harappan period to ~3800 years before present i.e. Late Harappan period.

Recently, another study investigated the changes in sediment provenance over time along a 300 km stretch of the Ghaggar river basin. It concluded that 9,000 to 4,500 years ago (9-4.5 ka) the river was perennial and was receiving sediments from the Higher and Lesser Himalayas.

It is worth noting that the Rig Veda mentions Saraswati as ‘one of the seven sisters’, ‘unbroken’, ‘pure in her course from mountain to sea’, ‘breaks through the ridges of the mountains with her strong waves’. Several teerthas at its banks are also mentioned.

The Nadu Sukta hymn of the Rig Veda which mentions 19 rivers starting from the Ganges, moving westward to Indus and three of its tributaries flowing from Sulaiman ranges in Afghanistan, places Saraswati between Yamuna and Sutlej.

The later Hindu literature also mentions the drying up and receding of the river.

The archaeological evidence in favour of the Saraswati river provides a serious challenge to the settled chronology based in the assumption of ‘Aryan invasion’.

Given that the Rig Veda mentions Saraswati in full might, meeting the sea from the mountains; based on geological evidence, its composition would coincide (in the latest) with the Mature phase of the Indus Valley civilisation.

Based on the above mentioned paper, Rig Veda should have been composed between 9-4.5 ka. This gives a serious blow to the Aryan Invasion theory.

Scholars, even those who accept the invasionist view, have agreed that instead of the labels given by Max Muller to Rig Veda - ‘primitive’, ‘nomadic’, ‘pastoral’ etc - Rig Vedic society was “highly complex and in the full blaze of the civilisation”.

Also, not only the timeline of Rig Veda matches with that of the Harappan civilisation, but also the geographical area - north-west region of the Indian subcontinent.

And in this region, no archaeological evidence separating ‘Aryan’ from ‘Harappan’ is found. There is only one culture - Harappan. There is also biological continuity witnessed at this time.

While by an accident of fate, the first site of the Harappan civilisation was discovered in what is today the territory of Pakistan, the latest research - not just regarding the existence of Saraswati river, but number of mature Harappan sites, average size of the sites etc - has made it clear that Indus Valley civilisation should be more aptly called ‘Indus/Sindhu-Saraswati civilisation’.

Also read: Saraswati River As Described In Rig Veda Did Exist: What Latest Research Means For IVC And Aryan ‘Invasion’