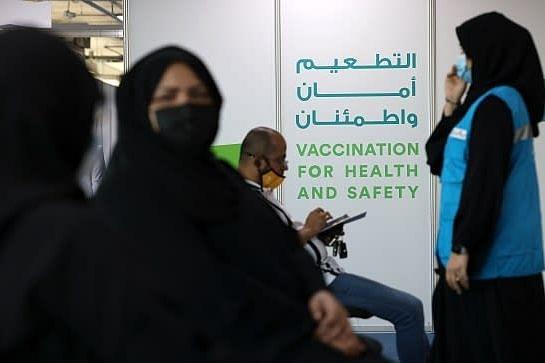 Vaccination board in Bahrain

The majority of vaccinated people in the East African nation have received China’s Sinopharm vaccine, almost 57 per cent of the population, while the rest got Covishield, the Indian version of Oxford-AstraZeneca jab.

After Seychelles, the immunity induced by the Sinopharm vaccine has now been brought into question in the United Arab Emirates and Bahrain.

The concerns were raised after both the countries said they would provide booster shots to those who have already completed their two-dose regimen six months ago.

According to some experts, this decision suggests that the Chinese vaccine is producing a weak immune response, which needs to be boosted.

In terms of a booster shot, the expert suggested that a different product would be better than using a third dose of the same one.

The vaccine produced by Chinese firm Sinopharm had been approved for emergency use by the World Health Organization (WHO) in May.

The company said as of early May, over 200 million doses of its product had been administered globally anyway.

But these recent cases have raised questions about the usefulness of the vaccine.

As reported by the South China Morning Post, Nikolai Petrovsky, who is a vaccine developer and professor at Flinders University in Australia, said: “It is a concern that these inactivated vaccines appear to have very weak immunogenicity such that they need a third dose just six months after the second dose is given.”

He explained that the issue might be from the small amount of virus’ spike protein that inactivated vaccines contain or a weaker kind of adjuvant used to boost the performance of the jab.

Sinopharm COVID-19 vaccine has been approved by more than 40 countries.

But European Medicines Agency (EMA) has not yet reviewed the vaccine for use in the European Union.

In terms of other vaccines developed in China, on 20 May Philippines received 500,000 Sinovac Biotech’s CoronaVac vaccine.

This latest delivery has raised the number of vaccines received by the Philippine government from the Chinese drugmaker to 5.5 million.

According to reports, more vaccines from Sinovac are expected in June.

Meanwhile, China delivered a total of 6 million vaccine doses to Thailand so far.

The latest delivery took place on 20 May, after 1.5 million doses of Sinovac’s Covid-19 vaccine procured by the Thai government arrived in Bangkok.

According to reports, China has sold or donated its vaccines to several African countries, including Algeria, Morocco, Tunisia, Senegal, Guinea, Gabon, Congo, Namibia, Zimbabwe and Mozambique.

Both the jabs from Sinopharm and Sinovac account for the bulk of shots given in China, which is reportedly inoculating 14 million people a day.

Firdausi Qadri, who is an immunologist at the International Centre for Diarrhoeal Disease Research in Bangladesh’s Dhaka, said that there is a huge demand for Chinese vaccines.

Through the COVAX initiative, India was supposed to contribute one billion doses of its Covishield vaccine.

But the current Covid-19 crisis in the country has disrupted the effort.

Deliveries to COVAX of another WHO-listed vaccine produced by American company Pfizer and its German partner BioNTech have been limited, while none of Johnson & Johnson’s has been shipped yet.

The other mRNA vaccine from Moderna was listed by the UN health agency on 30 April.

As a result, Chinese vaccines are badly needed, said a member of a technical group on immunization that advises the WHO, Gagandeep Kang, who is a virologist at the Christian Medical College in Vellore, India.

But many experts pointed out the fact that even though Chinese researchers were among the first to start developing Covid-19 vaccines in early 2020, they have yet to publish complete trial results.

Some experts also believe that this lack of transparency could fuel vaccine hesitancy.

As per a Nature report, Hilda Bastian, an independent scientist who studies evidence-based medicine in Victoria, Australia said as of now, only scattered information from various nations has been released on Sinopharm’s vaccine.

The UAE and Bahrain, which have now decided to give a booster shot of the Covid-19 vaccine, approved Sinopharm’s jab in early December 2020.

This approval was based on the trial data that included a UAE study involving 31,000 participants.

At that time, it was found that the vaccine was 86 per cent effective at preventing coronavirus caused disease after the second shot, with no deaths among immunised individuals.

But the WHO listed the vaccine with an efficacy of 79 per cent.

In the case of CoronaVac, the data from clinical trials and national vaccination campaigns have also emerged with mixed results.

While Brazil and Turkey have revealed efficacy figures of 50.7 per cent and 83.5 per cent respectively, analysis of Chile’s mass vaccinations has shown 67 per cent efficacy.

Experts also want to know what types of immune response these vaccines trigger, how long the protection lasts and how well they work against emerging SARS-CoV-2 variants.

“The more data we have, the better,” said Esper Kallas, who is an infectious diseases researcher at the University of São Paulo in Brazil.