This BJP General Secretary Says He Did Not Eat Grains For 20 Years: Here’s Why 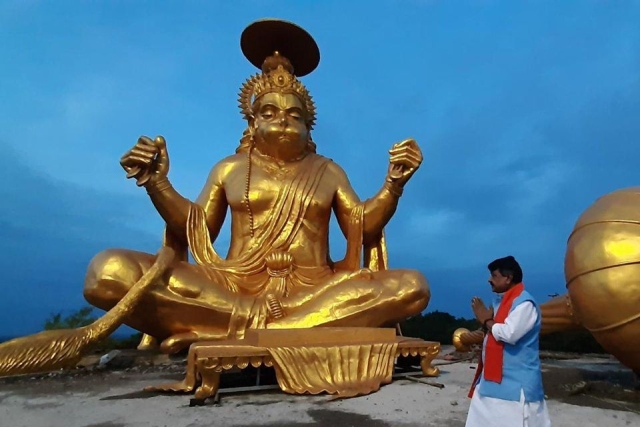 Kailash Vijaywargiya in front of the Hanuman idol.

Senior Bharatiya Janata Party (BJP) leader and party's general secretary Kailash Vijaywargiya has eaten grains after two decades. According to reports, Vijaywargiya, a devotee of Hanuman, had given up eating cereals about 20 years ago.

According to this report, after he became the mayor of Indore in 2000, Vijaywargiya had pledged to instal an idol of Hanuman near Pitri Parvat, which is situated near the Indore airport. The Hanuman idol is said to be made of ashtadhatu — a blend of eight minerals.

It is said that Vijaywargiya had decided to exclude grain from his diet as a pledge towards the development and the well being of Indore.

Vijaywargiya's pledge has a story behind it. According to the report, an ascetic had told him that the city of Indore suffers from “pitr dosh” — a situation considered unfavourable to the development of Indore as per astrology.

The pledge and the installation of Hanuman's idol were considered a spiritual remedy towards that aspect of Indore.

During these 20 years, he is said to have included only fruits and other food items, which are part of Hindu fasting. He took to Twitter to announce the keeping and the fulfilling of his pledge.

Indore happens to be the BJP leader's birthplace. The Hanuman idol in ashtadhatu is said to be 72 feet high. It weighs 108 tonnes.

The idol is known as Shri Pitreshwar Hanuman. Its arrival in Indore was celebrated on Tuesday and people of the city were invited to the celebratory meals.