This Is Not The Time To Abandon The Mosques: As Late As 17 March, Jamaat Leader Was Explicitly Urging Its Followers To Assemble To Beat Pandemic 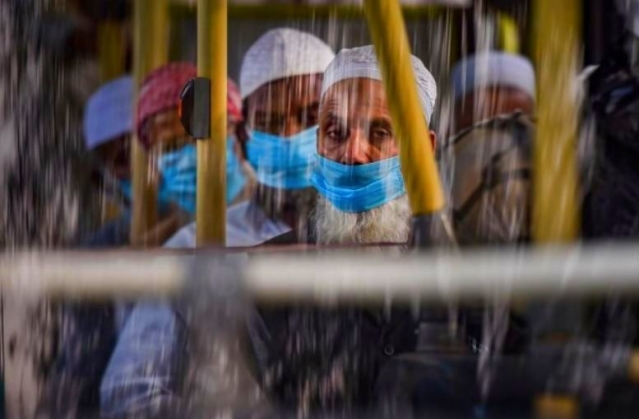 People who participated in the event.

India’s Covid-19 cases have seen a sharp rise in the last 48 hours. Most of these new cases have been traced to a multi-day event of the Tablighi Jamaat in Nizamuddin, New Delhi.

The Jamaat, by self description, is an Islamic revivalist movement. Over the last ten decades, it has grown to be among the largest Islamic organisations in the world.

As things stand today, the Jamaat appears to have severely impacted India’s fight against Covid-19.

The Jamaat appears to have blatantly violated the lockdown in New Delhi and disregarded all calls for social distancing.

As an analysis of the speeches made by Maulana Saad, one of the senior-most clerics of the organisation suggests that even as the country was staying put inside houses and practicing self isolation, the Jamaat congregation in New Delhi was actively and explicitly encouraged to continue assembling together.

A timeline of events interspersed with what Saad said in his speeches follows:

1 January onwards: 2,100 foreigners belonging to Tablighi Jamaat come to India. As of 21 March, 824 were spread out in different parts of the country while 216 were lodged at the Nizamuddin Markaz.

27 February - 1 March: Tablighi Jamaat congregation at the Sri Petaling mosque in Malaysia. Around 16,000 people, including over 1,500 foreigners from India, China, South Korea, Indonesia, Canada, Nigeria, Singapore and Australia were in attendance.

10 March: Government advises all passengers having travel history to China, Hong Kong, Republic of Korea, Japan, Italy, Thailand, Singapore, Iran, Malaysia, France, Spain and Germany to undergo self-imposed quarantine for a period of 14 days from the date of their arrival.

17 March: First death out of Jamaat cluster in Malaysia.

In the congregation held in New Delhi on this date, Maulana Saad exhorted those who had assembled to continue coming to the mosques as that was the only way the virus could be beaten.

He said in his address:

Translation: The Prophet would immediately dispatch a jamaat to the place from where he got the news of a quarrel, or an epidemic, or trouble. And if the jamaat couldn’t enter the place in spite of trying, they would ask, ‘now what should we do?’. Hazrat would say: go to the mosques around the area where the trouble is, and get the people to acknowledge/receive you. And make them join in your deeds with the assurance that this is the only way in which the agony/calamity will be removed.

[Unclear] Hadees says that the torment/agony which has been predetermined by Allah is removed (prevented) only due to those who fill (inhabit) the mosques.

In this scenario, abandoning mosques is a violation of this Hadees. It is said in it that it is due to inhabiting the mosques that the torment, whose occurrence is pre-determined, is prevented.

Denying this tradition, denying this Hadees by saying that this is not the time to congregate, for congregation will lead to infection, means that you have changed the custom by which Allah removes agony and sends help.

The same can be heard in this clip from 06:55-08:05. However, before this piece could be published, this video was made ‘private’, i.e., access to it was restricted.

21 March: 1,746 people including 216 foreigners are at Nizamuddin Markaz, five days after the Delhi government ordered all religious places to close.

22 March: Janata Curfew. In the evening, Delhi CM announces lockdown till 31 and orders sealing of UT’s borders starting 6 AM on 23 March.

The order by the government mandates all religious places of any denomination to be closed.

In the assembly held on 23 March, Maulana Saad again begins his address by stressing the supremacy of the monotheistic God’s will over cause and effect of the material world.

Translation: It is possible that some disease does not have a medicinal cure, but it is impossible that there be a disease which cannot be cured by prayers.

On the assembly held on this day, you can sense there is some realisation of reality and the impending disaster.

Translation: Heeding the advice of doctors is not against faith, belief in God or Shariat. Rather, if we are not careful, and then something were to happen, then one should blame oneself.

However, he immediately adds a caveat,

Translation: In this, we need to follow the guidelines of law and that of doctors only till the point where faith (deeds) does not go in vain. If faith goes in vain, then Allah will hand us to the doctors and withdraw his hand of help.

Following this event of 26th, here is how the Jamaat story and tragedy unfolded in the days since.

26 March: One dies in Srinagar. He had attended the Delhi Markaz.

27 March: Six Covid-19 suspects are taken away from Nizamuddin Markaz and put in a quarantine facility in Jhajjar, Haryana.

28 March: 33 people are taken away and isolated at Rajiv Gandhi Cancer Hospital in Delhi.

29 March: NSA Ajit Doval meets with delegation of Nizamuddin Markaz on the intervening night of 28-29 March after which they decide to vacate the mosque.

29, 30 March: Govt authorities - health officials and Police start evacuation of all those residing in the Markaz and transport them to hospital and quarantine facilities via DTC buses.

This story is unfolding. What is certain however, is that this religious group jeopardised the chances of overcoming a pandemic for an entire country.