Trudeau 2.0: The Canadian Election Results And Its Implications For India 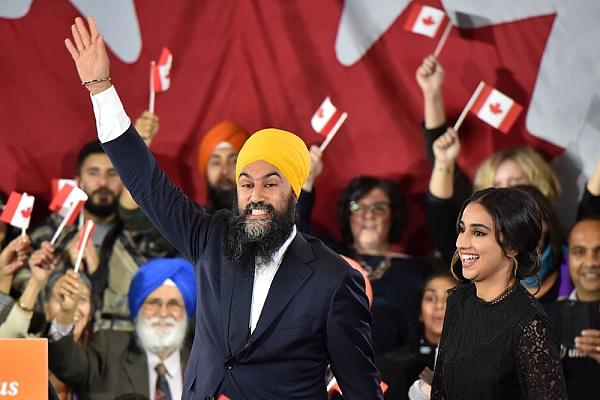 Extreme-Left leader Jagmeet Singh of the New Democratic Party, who has 24 MPs, is considered close to Khalistanis.

While the Maharashtra and Haryana elections have been creating buzz here, far far away in Canada, the Federal Election results have been announced and might have interesting consequences for India.

Voting took place on 21 October and the results were announced the same day. The incumbent Prime Minister, Justin Trudeau, of the Liberal Party of Canada retains his post but in a minority government with the support of the New Democratic Party (NDP), defeating the Conservatives. The seat share is as follows:

The son of former Prime Minister Pierre Trudeau, Justin’s re-election was not easy. He was riding against a wave of anti-incumbency, particularly for his statements of political correctness, often considered hypocritical, and for his immigration and economic policies.

Trudeau has been in the news for claiming to occupy the ‘woke’ liberal space ever since he was elected. He has been attending LGBTQ Pride parades regularly (the first PM to do so), claims to be a feminist and pro choice for abortion, yet he was accused of bullying his Attorney General in the SNC-Lavalin affair.

Under his government, Canada has witnessed the biggest influx of immigrants since World War I, a majority of whom are Indians. He was also criticised when Time published his 2001 photo donning a blackface, an allegedly racial imagery, for which he apologised.

The Conservative Party leader, Andrew Scheer, had his own share of criticism. There were questions over his earlier job in Insurance and on his dual citizenship of Canada and US (which he obtained through his American-born father).

In spite of having a high vote share, his party could not win enough seats and would have to be content in the Opposition space. The kingmaker who would support Trudeau’s government though is NDP’s leader Jagmeet Singh, and here is how things get interesting for India.

Singh is a Punjabi Sikh whose parents were of Indian origin and is the first turban- wearing Sikh to lead the NDP. There are reports that on various occasions, he has appeared to promote Sikh extremism.

He has refused to blame the 1985 Air India bombing on Sikh extremists. In this video, he is seen justifying the referendum 2020 for the Khalistan movement.

Trudeau himself had been criticised for his disastrous diplomacy during his tour to India, not just for his sumptuous and pompous Indian costumes, but where the Canadian high commissioner invited a Sikh extremist named Jaspal Atwal (who has been convicted of attempted murder and was previously affiliated with a terrorist group) to a dinner in Delhi.

Already, there has been a controversy with Canadian Defense Minister Harjit Sajjan’s alleged involvement with Khalistanis. Now, with the increased influence of extreme left leader Jagmeet Singh in the government, it becomes clear that the secessionist groups of Khalistan are likely to catch momentum in the west.

Time to ask whether the already frigid relations between India and Canada will worsen under Trudeau 2.0?