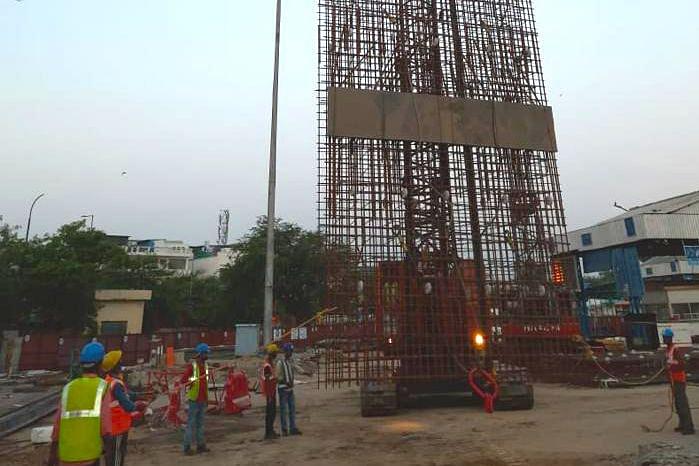 A part of the 20-metre deep diaphragm wall cage.

With the construction of a launching shaft in Anand Vihar for tunnelling purpose having begun, work for the underground section of regional rapid transit system (RRTS) has entered a crucial stage.

Anand Vihar is slated to be an underground station of the 82-km long Delhi-Ghaziabad-Meerut RRTS corridor, which has 24 stations including two depots.

The first diaphragm wall (D-Wall) cage of about 20 metre depth (equal to height of a 10-storey building) and five-metre wide was lowered and concreted.

With this milestone, construction of the underground section for RRTS has entered the next stage, said a senior National Capital Region Transport Corporation (NCRTC) official involved in the project.

Estimated to cost Rs 30,274 crore, Delhi-Ghaziabad-Meerut RRTS project aims to shift the modal share in favour of public transport from 37 per cent to 63 per cent in the region, which ultimately helps in curbing pollution.

While increased share of public transport will reduce dependence on private vehicles and will lead to less congestion on roads, it would also result in reduction in accidents.

Executed by the NCRTC, RRTS is a rail-based, high-speed transit system aimed at bringing people and places closer to the National Capital Region (NCR).

NCRTC, a joint venture company of the government of India and states of Delhi, Haryana, Rajasthan and Uttar Pradesh, is mandated for implementing the RRTS project across the NCR, ensuring a balanced and sustainable urban development through better connectivity and access.

D-wall acts as a shield or frame to balance the earth pressure, thereby reducing the possibility of soil collapse and also prevents water seepage during excavation.

The launching shaft is 20-metre long and 16-metre wide, located at the south side of Anand Vihar underground RRTS station. Two tunnel boring machines (TBMs) will be lowered in this shaft to bore RRTS twin tunnels from Anand Vihar towards Sarai Kale Khan.

It will be the longest tunnel section between any two stations amongst the available metro systems in the country.

An air ventilation shaft will be constructed in between this large section connecting both sides of tunnels, for ensuring safety of passengers during any emergency. Emergency evacuation facility for passengers is also being constructed to facilitate safe exit of passengers from tunnels, in a rare eventuality requiring evacuation.

According to NCRTC, construction of a north tunnel launching shaft will start soon to bore twin tunnels of more than 2 km length from Anand Vihar towards Meerut.

These tunnels will be of higher diameter as compared to that of metro systems in the country due to larger rolling stock and higher design speed of 180 kmph in case of RRTS. The internal clear diameter of these tunnels is 6.5 metre to reduce the air pressure and discomfort to passengers, due to generation of shock waves in tunnels because of the higher speed of these trains.

NCRTC team is making best efforts to recover the time lost due to the impact of the second wave of Covid-19 restrictions on the construction activities and supply chains.

The construction activities are being carried out while following Covid appropriate behaviour at sites, with due safety protocols in compliance with pandemic rules.