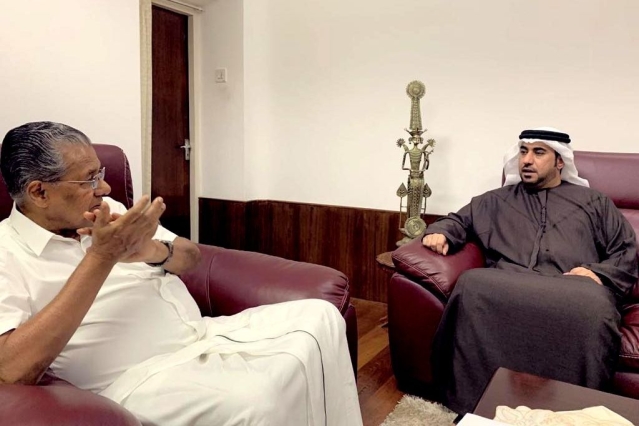 The United Arab Emirates' (UAE) Consul-General of the Thiruvananthapuram consulate in Kerala had allegedly violated the provisions of the Foreign Contribution Regulation Act (FCRA) in signing a contract with a private firm to construct buildings under the State LIFE Mission Project providing houses for the homeless.

Local media reports said that according to the memorandum of understanding (MoU), a copy of which has now become public, only UAE Red Crescent could sign such a contract with the private construction firm, Unitac Builders and Developments.

The Kerala government and Red Crescent signed an MoU in July last year to construct 147 flats on 2.17 acres of land at Wadakkancherry in Thrissur district under the project.

Besides the flats, a hospital was also to be developed on government land.

Red Crescent signed the MoU with the Kerala government as the State cannot directly sign such an agreement with a foreign country, especially to avail of financial assistance.

Such a move would be in violation of FCRA.

Now, both the original signatories to the MoU, the Kerala government and Red Crescent, are not part of the contract signed for the construction of the building.

The LIFE (Livelihood, Inclusion and Financial Empowerment) Mission project has also been silent on who the project consultant would be.

The project, a pet project of Chief Minister Pinarayi Vijayan, envisages providing houses to the homeless and landless in the State.

As per the MoU, Red Crescent would provide 10 million UAE dirham (Rs 20.18 crore) to the Kerala government for building a housing complex and a hospital.

But in the contract for the building, the UAE consulate has directly signed two contracts, one with Unitac for the housing complex at a cost of Rs 14.24 crore and another for a women and children's hospital for Rs 6.10 crore with Sane ventures, an arm of Unitac.

The housing project has come under scrutiny after one of the prime accused in the gold smuggling case, Swapna Suresh, reportedly told the National Investigation Agency (NIA) that she had got a commission of Rs 1 crore for helping the State government in getting the funds.

The NIA is investigating the gold smuggling case as it is feared to have national security and defence ramifications.

With so many details coming out, the Enforcement Directorate, which is probing the hawala trading angle in the gold smuggling case, and the Ministry of External Affairs have sought a copy of the MoU.

The Ministry of External Affairs, in particular, has been worried over violations of FCRA.

Details are now being sought to know if the Centre's permission had been sought by Kerala to sign the MoU with Red Crescent.

Reports said that the State Law Department had suggested changes in the MoU but suspended principal secretary M Sivasankar, who is alleged to have links with Swapna, had ignored the suggestions.

The gold smuggling case came to light on 5 July this year after Customs Department seized diplomatic baggage meant for the UAE Consulate General with 30 kg of gold.

So far, at least 15 persons have been arrested in connection with the case.