Understanding Nipah Virus And Its Potential To Cause Next Pandemic 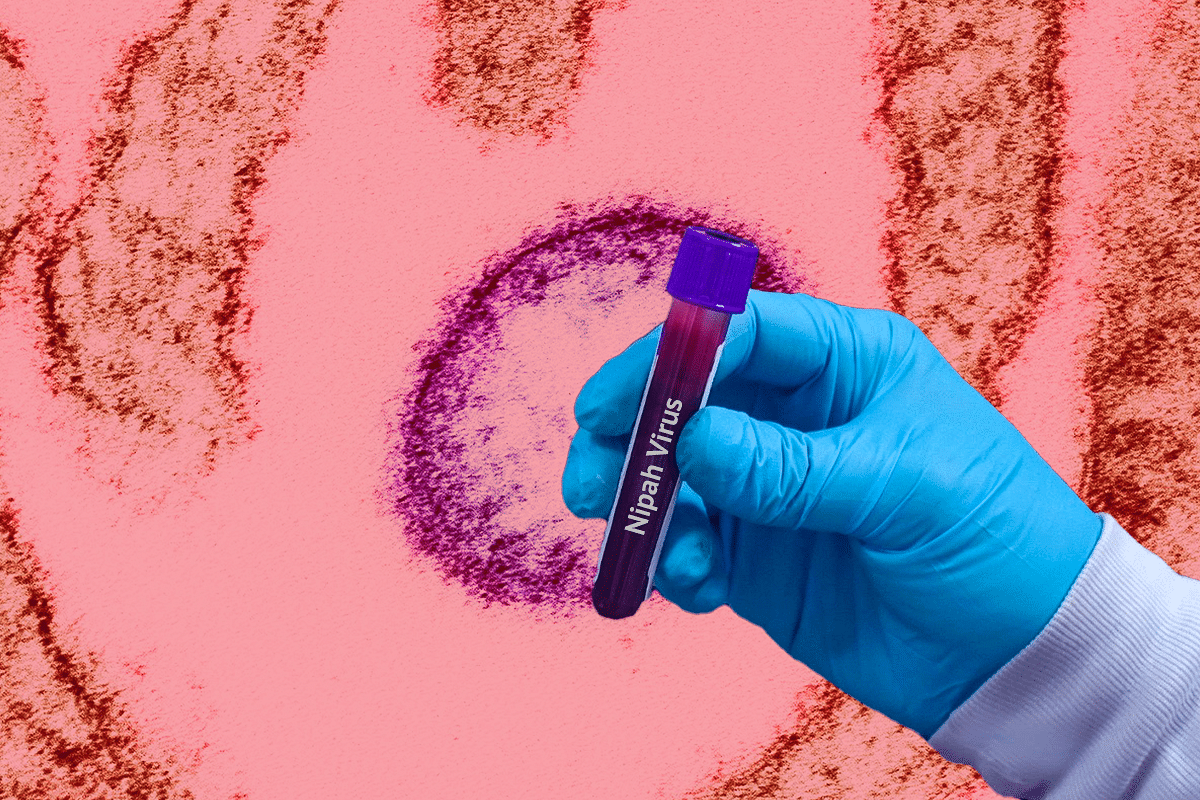 Amid the Covid-19 pandemic, authorities in India's southern state Kerala are racing to contain a Nipah virus outbreak. The virus, which is unrelated to the coronavirus and significantly more lethal—as well as has the potential to cause another pandemic according to scientists—has killed a 12-year-old from Kerala's Kozhikode district recently, spurring increased efforts to track down his contacts. As per the latest reports, the number of people symptomatic of this infection rose to 11 on 6 September.

Kerala's Health Minister Veena George said that individuals on the contact list of the deceased have gone up to 251 and it could increase further. Of the total contacts, 129 are healthcare workers. Of the 54 high-risk contacts, 30 are healthcare personnel and have all been quarantined in the Kozhikode's Government Medical College Hospital.

According to reports, the minister said: "The boy was taken to at least four healthcare institutions, including the MCH, Kozhikode, before being admitted to the private hospital where he died. That is why a majority of the contacts are healthcare workers." It was also stated that two of them are from the districts of Malappuram and Kannur, and an alert was issued in those areas on 5 September.

Needless to say that the unfortunate death of the child and the outbreak has brought back memories of the similar situation that erupted in May-June 2018, when the same district reported 18 confirmed cases, 17 of which were laboratory-confirmed deaths. The virus's high mortality caused concern across the state and country, and when it was contained, the state's healthcare surveillance system received accolades. As it turned out, the past experience somewhat helped the state to work during the coronavirus pandemic.

Before the 2018 outbreak in Kerala, there have been multiple Nipah virus outbreaks in Bangladesh, with spillovers into India, most notably in Siliguri and Nadia in West Bengal in 2001 and 2007. During the outbreak in Siliguri, 33 health workers and hospital visitors were infected after being exposed to Nipah virus patients in the hospital. In these two districts, at least 70 individuals died as a result of the outbreaks.

However, according to a June report, scientists from the National Institute of Virology (NIV) in Pune have found the deadly Nipah virus antibodies in two species of bats in Maharashtra for the first time. According to NIV experts, bats bearing the Nipah virus have been discovered in Mahabaleshwar, Maharashtra. As per the researchers, antibodies of the virus were also found in the Dhubri district of Assam and West Bengal's Cooch Behar.

The Nipah virus, which has a fatality rate of up to 75 per cent, is one of the top ten viruses on the World Health Organization's (WHO) watch list. The virus was first discovered in Malayasia in 1998-99 during an encephalitis-like outbreak among pigs and pig handlers and has since spread to Bangladesh, Malaysia, India and Singapore. The human Nipah virus is classified as an "emerging zoonotic disease," which means it can spread to humans after being incubated in other animals.

It is also classed as a "highly pathogenic paramyxovirus," which necessitates the use of BS-4 facilities to handle. Large fruit bats of the Pteropus genus are the virus's natural reservoir. The two primary mechanisms of transmission are believed to be drinking raw date palm sap contaminated with the virus and close physical contact with Nipah-infected individuals.

The Nipah virus isn't a very efficient spreader, unlike the SARS-CoV-2, which is more airborne and can travel over long distances. The main sources of spread are said to be the contact with body fluids and an infected person's respiratory droplets, which aren't expected to travel very far. This explains why close family members in a house are at the highest risk, as well as the infection spreading in hospital settings between patients. The viral infection can cause severe respiratory problems and encephalitis, swelling of the brain,

Eradicating a virus or a disease is not impossible but it takes time. Scientists are concerned about its future threats as there are no approved treatments or vaccines for the virus infection and there are no projects in the pipelines of pharmaceutical companies. As per the WHO, the primary treatment options include limited supportive care, including rest, hydration and treatment of symptoms.

However, as per the study, researchers from the Jenner Institute at Oxford University and the National Institutes of Health in the United States reported in July this year that the ChadOx1 vaccine vector, when tailored to the Nipah virus, completely protected African green monkeys.

It is a multi-purpose vaccination vector, which means it can carry DNA from a wide range of pathogens. For example, the ChAdOx1 with a piece of SARS-CoV-2 spike protein are used to develop Oxford-AstraZeneca or the Indian brand name Covishield. But the study is yet to be peer-reviewed.

Jayasree K Iyer, executive director of the Netherlands-based Access to Medicine Foundation, which is a not-for-profit organisation, highlighted that this virus could cause the next big pandemic. She said: "Nipah virus is another emerging infectious disease that causes great concern. Nipah could blow any moment. The next pandemic could be a drug-resistant infection."

The Nipah virus is dangerous for various reasons. The disease's long incubation period (as long as 45 days in one case) means there's plenty of time for an infected host to spread it without even realising they're sick. According to Veasna Duong, the head of the virology unit at the scientific research lab Institut Pasteur in Phnom Penh and his team, any possibility for people and fruit bats to come close to each other is considered to be a "high-risk interface," indicating a spillover is quite likely.

Duong said: "This kind of exposure might allow the virus to mutate, which might cause a pandemic." He also explained that "we observe [fruit bats] here and in Thailand, in markets, worship areas, schools and tourist locations like Angkor Wat – there's a big roost of bats there." At a typical year, 2.6 million people visit Angkor Wat, which means 2.6 million opportunities for the Nipah virus to spread from bats to humans in only one spot.

Duong and his team conducted a GPS tracking programme from 2013 to 2016 to learn more about fruit bats and the Nipah virus, as well as to compare the activities of Cambodian bats to those of bats in other hotspot locations. Bangladesh and India were two among them, both countries have witnessed Nipah virus outbreaks, which are thought to be linked to the use of date palm juice.

The team also identified high-risked situations, such as the usage of bat faeces also called guano, as fertiliser in Cambodia and Thailand, as well as in some rural areas. Duong said that 60 per cent of people they interviewed from these areas didn't know that bats transmit disease—which showed that there is a lack of knowledge.

However, avoiding bats may have been the straightforward solution to ensure safety from the Nipah virus, but as our population grows, humans are altering the globe and invading the wild ecosystems to meet the growing demand for resources. This is hastening the spread of zoonotic virus-caused diseases. According to a 2009 report, 60 per cent of the world's population now resides in Asia, as well as the Pacific and the region is rapidly urbanising.

Rebekah J White and Orly Razgour in a 2020 University of Exeter review about emerging zoonotic diseases wrote: "The spread of these [zoonotic] pathogens and risk of transmission accelerate with… land-use changes such as deforestation, urbanisation and agricultural intensification."

Asia is home to about 15 per cent of the world's tropical forests, yet it is also a hotspot for deforestation. The continent has one of the greatest rates of biodiversity loss in the world. Fruit bats prefer to reside in densely forested areas with plenty of fruit trees to eat. When their natural habitat is lost or harmed, they relocate and accidentally make close contact with other species they would not normally interact with.

As per the experts eradicating bats to put an end to such disease is not an option, as "bats play hugely important ecological roles," said Tracey Goldstein, institute director at the One Health Institute Laboratory and lab director of the Predict Project.

So, experts believe that long-time surveillance would help them to alert respective authorities to take required measures and prevent the spread, as well as spillover. However, around the world, scientists, veterinarians, environmentalists and even citizen scientists are working together to find an answer for preventing future outbreaks caused by zoonotic viruses.