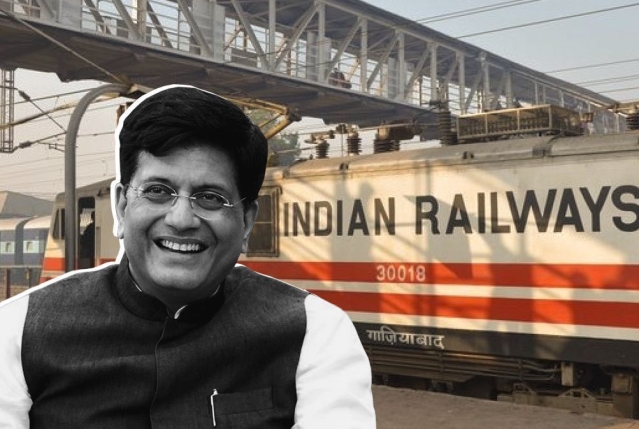 Target of 2024 million tonnes of freight loadings, elimination of more than 2,400 manned level crossings and completion of all national projects in Northeastern region are on focus for Vision 2024 of Indian Railways.

Prepared by a dedicated team with inputs from all concerned directorates, the Vision 2024 document aims at development of rail infrastructure in a big way to enhance capacity while removing bottlenecks and strengthening safety in train operations.

As per the directions given by Prime Minister Narendra Modi, a new paradigm shift has taken place in planning and faster pace of execution of projects in railways with available resources are utilised judiciously for optimum results.

The national transporter has set a target to eliminate 2,429 manned level crossings on all four arms of the Golden Quadrilateral rail network and its diagonals by March 2025 to enhance safety and operational speed on these crucial networks.

It will spend approximately Rs 41,200 crore for this.

According to the vision document, which is being circulated to all concerned officials, 1,186 level crossings are to be replaced by rail over bridges, another 1,223 by road under bridges and the rest 20 by diversion.

Vision 2024 has been envisaged to achieve targets of 2024 MT of freight loading by 2024, by augmenting infrastructure.

The plan includes increasing average speed of trains and electrification of all major routes in the next four years, besides a host of works, which would require nearly Rs 2.2 lakh crore.

The plan also specifies that the four national projects falling in the Northeast Region with a total length of 294 km costing around Rs 27,500 crore will have to be completed by March 2023.

Sources said the vision document has specified that works for raising of sectional speed to 160 kmph on New Delhi-Mumbai (including Vadodara-Ahmedabad) and New Delhi-Howrah (including Kanpur-Lucknow) routes costing Rs 6,804 crore and Rs 6,684 crore respectively will be completed by August 2023.

The works for raising the sectional speed to 130 kmph on the balance Golden Quadrilateral and diagonal routes will be completed by December 2021.

Considering that coal will continue to have a significant share in the railways freight basket, additional 20 coal projects of cumulative length of 2,350 km will be completed by March 2024.