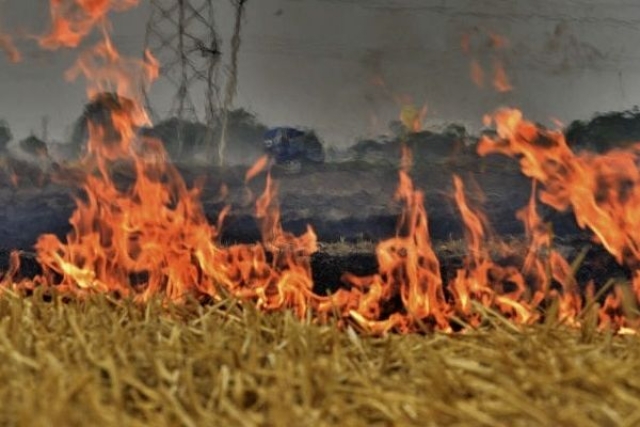 Farmers burning stubble in wheat fields on the outskirts of Ludhiana. (Gurpreet Singh/Hindustan Times via GettyImages)

While farmers, mainly from Punjab, are protesting in the National Capital Region (NCR) of Delhi and its borders demanding that the Narendra Modi government withdraw the three Agricultural reforms Acts, they also have a couple of other demands.

Among the demands is that this Ordinance promulgated by the Centre to deal with air pollution in Delhi and NCR regions is withdrawn or at-least have its provisions watered down.

The Ordinance was promulgated in October through which a Commission on Air Quality Management is being set up in Delhi-NCR region.

The Commission will be headed by a secretary-rank official and have jurisdiction over NCR, including areas in Haryana, Punjab, UP and Rajasthan with regard to air pollution.

As per the Ordinance, the Commission will supersede all other bodies/authorities set up through judicial orders or otherwise on air quality management, and in case of a conflict between orders of the Commission and those issued by state governments, the Commission's orders will prevail.

The Commission will also replace the Environment Pollution Control Authority (EPCA) constituted by the Supreme Court more than two decades ago.

The Ordinance also has provisions of jail term up to five years and penalty up to Rs 1 crore or both in case of non-compliance of the orders or directions issued by the Commission.

The Ordinance was promulgated as part of the Union government’s assurance to the Supreme Court to tackle air pollution in and around Delhi during October-November due to burning of stubble by farmers in Punjab, Haryana, UP and Delhi.

In view of this, the Supreme Court kept in abeyance its decision to appoint a one-man Commission headed by retired justice Madan B Lokur.

Supreme Court Chief Justice Sharad Bobde said that the apex court will look into the provisions of the Ordinance.

“The government is open to considering and discussing these issues as well,” the minister said.

Punjab alone had accounted for about 75,000 cases of stubble burning this year, while Uttar Pradesh and Haryana made up for nearly 7,500 cases.

Media reports said that the government has offered to make eight changes in the laws during the talks yesterday, that were inconclusive. Farmers’ representatives will meet Tomar, Union Commerce Minister Piyush Goyal and his deputy Som Prakash again tomorrow to end the deadlock caused by the blockade on Delhi borders.

The Modi government had, during the Monsoon session of Parliament, passed the The Farmers produce Trade and Commerce (Promotion and Facilitation) Act, 2020, Farmers (Empowerment and Protection) Agreement on Price Assurance Act, 2020, and the Essential Commodities (Amendment) Act, 2020, to usher in agricultural reforms.

The Trade and Commerce Act allows farmers to sell their produce to anyone, anywhere in the country, while the Price Assurance Act facilitates contract farming with the agreement written in the language the farmer understands.

The Essential Commodities Act amendment removes all stock limits for traders and will help farmers to sell their producers to buyers without worrying about the cap.