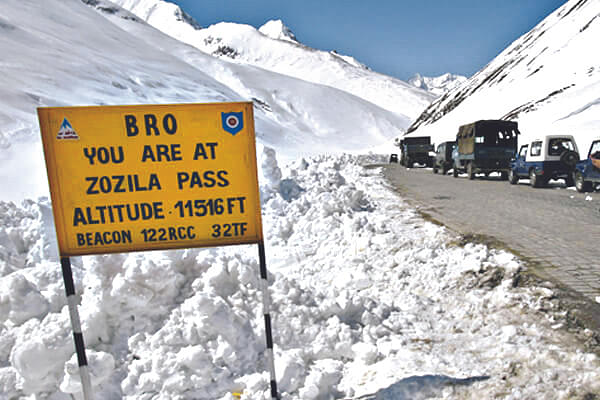 Among the three bidders in the race including Larsen & Toubro and Ircon International, the Hyderabad-headquartered company had quoted the lowest bid of Rs 4,509.5 crore for the tunnel project, stuck for over six years now.

The project holds strategic significance as Zojila Pass is situated at an altitude of 11,578 feet on the Srinagar-Kargil-Leh National Highway and remains closed during winters due to heavy snowfall.

"MEIL has emerged as the lowest bidder by quoting Rs 4,509.5 crore for the Zojila Pass tunnel project," an NHIDCL official said. The project is expected to be completed in 72 months.

The road from Srinagar to Leh in Ladakh is not suitable for vehicular traffic throughout the year.

The Srinagar-Ladakh highway is completely closed for six months, especially during the winter season. Even military vehicles are unable to move under these conditions.

Travelling long distances on alternative routes has become a costly affair and a waste of time. Under these circumstances, the road tunnel was proposed between Sonamarg to Leh and Ladakh via Kargil long back.

The project will be constructed from the Z-Morh tunnel to Zojila tunnel between Sonamarg-Kargil on national highway-1 in the Zojila pass area.

This EPC project is the most complex one. The construction of this tunnel is going to face unprecedented difficulties.

The tunnel has to be built 700 meters below the surface on average. The project is also in the most complex hill terrain with snowstorms often occurring.

Owing to dense snow for at least eight months in a year, the execution works will not be an easy task. At the same time, a river flows adjacent to the proposed project site.

These conditions are going to create severe problems as water and ice will pour during the construction.

The Border Roads Organisation (BRO) has decided to improve road travel facilities between Kashmir and Ladakh. As part of this plan, a highway tunnel will also be constructed from Srinagar to Baltal.

This tunnel road is also convenient for Amaranth Yatris. Baltal base camp near Kargil will be used for Amarnath Yatra.

MEIL Director Subbaiah said a two-lane road with bi-directional traffic would have to be constructed on the Zojila route, which is called a Single Tube tunnel.

The road consists mainly of shafts as well as portal structures and excavated areas. This complex project would have to completed in just 72 months.

The whole project has to be executed in two parts. The first part is 18.50 km of road, and the second part is 14.15 km as a tunnel. The first part is to widen the existing road from Judd-Morha to Zojila tunnel — about 3.018 km. Then a 13.842 km new road would be constructed.

Road Transport and Highways Minister Nitin Gadkari last month had said that the work on the project will start soon.

Prime Minister Narendra Modi had in May 2018 laid the foundation stone for the Rs 6,800 crore project, billed as Asia''s longest bi-directional tunnel, in Jammu and Kashmir.

However, barely months after the foundation, the NHIDCL on January 15, 2019 terminated the contract awarded to troubled IL&FS group company after it abandoned the project citing financial problems.

Earlier this year, the Ministry of Road Transport and Highways through NHIDCL had invited bid for "construction of 14.15 km long tunnel across Zojila Pass on Sonmarg-Kargil section of NH-1 between union territories of J&K and Ladakh along with approaches" through an engineering, procurement and construction (EPC) contract.

The company said the project was in a complex hill and its completion schedule is 72 months.

Gadkari had said that the tunnel for all-year connectivity between Leh and Srinagar may undergo some design changes to prevent cost escalation.