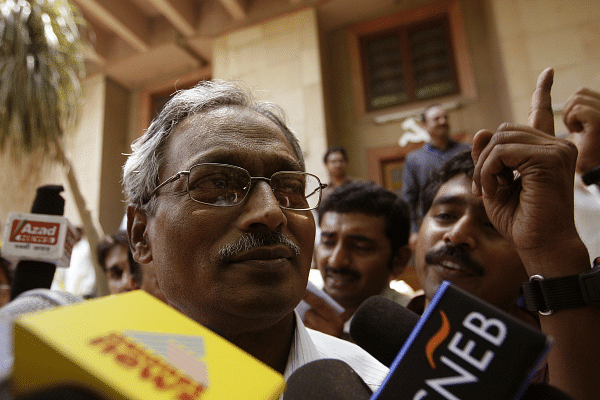 Searching the web for Nirupam Sen, the former Industries Minister in the Buddhadeb Bhattacharjee government who died in Kolkata Monday (24 December) morning of multiple organ failure, throws up the link to a wikipedia page titled “Sainbari Incident”.

Sen (a full-time member of the Communist Party of India [Marxist]) allegedly led a mob of frenzied party activists who attacked the Sain family (prominent supporters of the Congress) in Bardhaman town on the morning of 17 March 1970 in what has come to be known as one of the most horrific political murders in the country.

It was the brutality of the incident that shocked people across the country. The Sain family had gathered at their ancestral house for the naming ceremony of a baby born to the family. The CPI(M) activists, led by Khokon Sen (who allegedly changed his name later to Nirupam Sen), had taken out a procession to celebrate the fall of the second United Front government a day earlier. The Sain family, steadfast Congress supporters, had refused the blandishments and threats by the CPI(M) to join the red party. And they, thus, became the target of the Marxists’ ire.

Rekha Rani Sain, the widow of Naba Kumar Sain, the eldest son of the family, still recounts the horror of that morning in 1970 (read here). A few hundred CPI(M) activists started shooting arrows and pelting stones at Sainbari (the name of the family home), after which a few dozen of them entered the house and went on a looting spree. First, they gouged out the eyes of Naba Kumar and then hacked his two brothers – Pranab Kumar and Malay Kumar – to death in front of their mother, the widowed Mrignayana Devi. When she tried to save her sons, they hit her as well. Jiten Ray, a private tutor who had gone to Sainbari to tutor Rakha Rani’s daughter, was also killed brutally.

The Sain family was in a festive mood that day, a child born to a daughter of the family, Swarnalata Jash, was to be named. The child was a month old. The CPI(M) murderers did not spare the infant and threw him into a fire that was lit for the havan ceremony, but family members rescued the baby, who was later named Amrit Kumar and is now 48 years old. He still has burn marks on his body.

It was, however, what the Marxist murderers did after that which horrified everyone. They reportedly mixed the blood of Pranab and Malay, who they had killed, with rice that had been cooked for offering to the family deity, and forced Mrignayana Devi to eat that rice! They also smeared the blood of her sons on Mrignayana’s forehead!

The old lady never recovered from the shock and died a mental wreck in 1978. Then, Indira Gandhi, the prime minister at the time, visited the bereaved family and led the nation in condemning the horrific act.

Their bloodlust not fulfilled, CPI(M) activists murdered Naba Kumar (whose eyes they had gouged out in March 1970) a year later. A National Students’ Union of India (NSUI) activist Gunamoni Roy, who was a witness to the massacre, was murdered when he had gone to depose before the Tarapada Roy Commission that was instituted to probe the massacre by then chief minister Siddhartha Shankar Ray in 1971.

Many other witnesses were threatened and silenced into submission while others were reportedly bought off with offers of jobs and ‘blood money’. Around 83 CPI(M) activists were named in the first information report (FIR) filed with the police and the names of Sen and Benoy Konar (another CPI(M) leader who became a Politburo member) figure in the eleventh and sixty-third in the list of accused named in the FIR. Later, after the CPI(M) came to power in 1977, files pertaining to the case went missing.

It was only after the Trinamool Congress came to power in 2011 that some files pertaining to the case were dug up from old records at Writers Building (the Raj-era structure that used to house all major government departments till a few years ago) in 2012 (read here). The All India Legal Aid Forum is pursuing the case and its general secretary, Joydeep Mukherjee (a Supreme Court lawyer), who had filed a petition before the Supreme Court, holds that Sen was never exonerated or even granted bail in the case.

Mukherjee is also critical of a commission (under Abhinava Basu, a retired judge of the Calcutta High Court) set up after the Trinamool Congress came to power in 2011. The commission, Mukherjee says, has not examined all witnesses. “I hear the Commission has submitted its report. If that is true, the state government should reveal the findings. A lot of time has passed and many witnesses have died. One of the prime accused, Khokon Sen, just died. The Sain family is awaiting justice,” Mukherjee told Swarajya (read here).

Sen was born in October 1946 into a family of communist supporters. His father, a school teacher, was part of the communist movement from the British days and had joined the communist chorus of “yeh azadi jhoota hai (this freedom is a lie)”.

Indoctrinated at a young age, Khokon (later Nirupam) joined the Students’ Federation of India (SFI), the students’ wing of the CPI(M), when he was in school and became the organisation’s Bardhaman district secretary in 1966 at the age of 20. He became a full-time member of the CP(M) in 1968, the party’s Bardhaman district secretary in 1989 (he held the post till 1995), and was elected from Bardhaman South Assembly constituency in 1987, 2001, and 2006. He became a member of the CPI(M) Central Committee in 1998 and the party politburo in 2008.

Sen led the industrialisation drive when he joined the first government of Buddhadeb Bhattacharjee as Industries and Commerce Minister in 2001. The CPI(M)’s promise of industrialising the state and creating jobs led to its resounding victory in the 2006 elections. But the ground started slipping from beneath the Marxists’ feet later that year with protests gaining ground over Singur (where land was forcibly acquired for the Tatas’ Nano car project) and Nandigram (where land was sought to be acquired for a chemical hub). The rest, as they say, is history.

On Wednesday (26 December), when comrades stream past his body at the CPI(M) party headquarters in Kolkata to pay their last respects, many would be wondering if it was this man who brought about the downfall of the party with his industrialisation mantra. And the surviving members of the Sain family are also unhappy that the man who brought them such misery was never brought to justice.

Sen, in death as in life, remains a controversial figure.