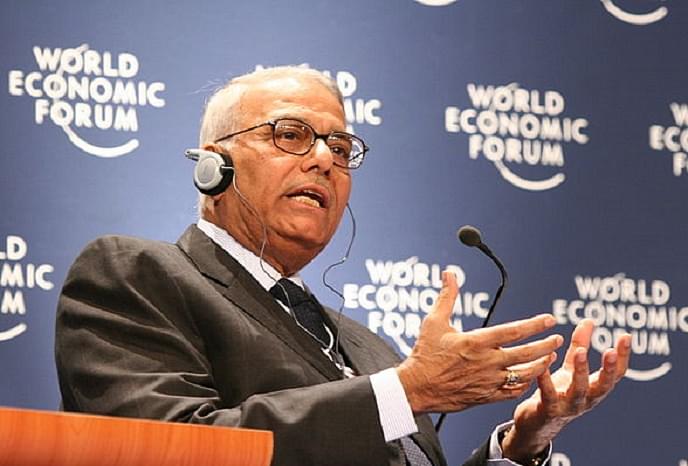 In an interview with Swarajya, former finance minister Yashwant Sinha explains how the Fiscal Responsibility and Budget Management Act, 2003 got diluted and how the government can step up public spending and be fiscally prudent.

As the debate on public expenditure vs fiscal consolidation rages ahead, the Fiscal Responsibility and Budget Management Act, 2003, has fallen by the wayside. But ever since it came into force in 2004, it has been observed more in breach than in practice.

This cannot be easy for the architect of the law – former finance minister Yashwant Sinha. In this interview with Seetha, he talks about what he wanted, how the Act got diluted and how the government can step up public spending and be fiscally prudent. Excerpts:

What prompted you to initiate the FRBM legislation when you were finance minister during the first National Democratic Alliance government?

At that time, in 1998, we were overwhelmed by the problem of fiscal deficit. And I realised that fiscal deficit was only the concern of the finance minister. Nobody even within the government was worried about it, much less in the rest of the country. Its deleterious impact on the economy was clearly visible.

My inquiries revealed that almost every country had some kind of law for balancing the budget of the government. It was not a free for all that finance ministers came and went, doing exactly what they wanted in the budget and taking liberties. So I said the best thing to do will be to follow the practice in the rest of the world and have our own law. I appointed a committee and, based on its recommendations, we drafted the legislation.

My first battle was in the cabinet itself because nobody really was worried about it. But I had talked so much about it that the bill had a much easier passage when it came for formal approval of the cabinet. I had the support of Prime Minister Atal Behari Vajpayee.

It was tabled in Parliament in 2000 and was referred to the standing committee on finance. Shivraj Patil of the Congress was chairman. It greatly diluted the bill.

What had you proposed?

What I had originally proposed was a very strict law and if the finance minister felt he would not be able to meet the target set for the year, then he will even cut back on expenditure. But the target would have to be met. We had a three-year roadmap and revenue deficit was to be completely eliminated by 2006, fiscal deficit limited to 2 percent of GDP and the union government will not borrow from the Reserve Bank of India (RBI). There will be a separate public debt office.

There were also some requirements about government keeping Parliament informed by presenting various kinds of quarterly reports on how they were doing. We also talked about emergency situations – drought, earthquake, national security issue – and we said in those circumstances, after explaining the situation, the target could be breached.

What was the dilution?

They said the government must have the freedom to spend money if the situation so demanded, can’t put it in a straitjacket. They did away with the provision that expenditure will be automatically cut. And the concern was not merely the emergent situations, but that it would force the government to cut social spending.

This wasn’t there in your original bill?

No. And even subsequently I had said that if the Act had to be amended, you come with a separate amendment like in every other Act. But if you smuggle it in through the Finance Bill, then nobody gets to know about it; it is not highlighted.

I left the ministry in June 2002. The Bill was passed in 2003, after taking into consideration the recommendations of the standing committee. The deadline was postponed to 2008. It was notified when the UPA came to power.

But that very year it was diluted.

Yes. The deadline was postponed to 2009, and then they kept pushing back the targets. In 2009, they just took leave of the Act.

If it is constantly being changed…

It has no meaning. The Bill is dead. I have no hesitation in asserting that even the diluted FRBM Act which was notified by the UPA in 2004, is dead. It is like the Directive Principles of State Policy – it is there on paper; if you want to follow it you can follow it.

There was a point of view then that since Parliament approves the budget, it is sanctioning the borrowing limit set out in it, so there is no need for an FRBM Act.

Perhaps not, looking at the history of the Act.

Then how does one ensure fiscally responsible behaviour?

I’d like to make a distinction here. Government expenditure is of two kinds – revenue and capital. I am in favour of government accounts being reclassified as productive and the rest. Productive means basically investment expenditure, which would produce goods and services. When we talked about elimination of revenue deficit and fixed fiscal deficit at two percent, what was the philosophy behind it? It was that you will not borrow money for current consumption.

Current consumption has to be met by your revenues, your earnings. And if you are running a fiscal deficit of even 3 percent of GDP and you are spending that borrowing on investment or productive purposes, then you are creating the capacity to repay the debt.

So today when some economists talk about economic cycles etc, I would like to refer to you to the 2008-09 crisis. In 2007-08, the fiscal deficit was 2.5 percent (less than the target) and revenue deficit was 1.1 percent. So were on track and if we had continued on the FRBM path this 1.1 percent also would have been eliminated in two years time. So it is not that it cannot be done.

The only other issue which the RBI and finance minister have to keep in mind is to look at the space which is available, which is determined by the appetite in the market for government bonds. You cannot suddenly flood the market with government bonds because then the yields will be affected. So keep that in mind. And if you feel that one percent of GDP, which is in excess of Rs 1 lakh crore today, is what you need for revving up the economy, go ahead.

But the bulk of revenue expenditure is committed and inflexible…

How did we reach the figure of 1.1 percent revenue deficit in 2007-08? You didn’t have to bend over backwards to cut subsidies or cut expenditure. You just gained from the momentum in the economy. And the momentum came because a lot of productive forces had been unleashed in the economy.

So government investment, private investment, everything was growing. The silver lining today is that you are saving untold sums of money on petroleum  subsidy and then you are also adding to your revenues by increasing excise. So that is a big opportunity.

The Fourteenth Finance Commission made two suggestions. One, set up an independent fiscal council to ex ante vet budget proposals for their financial implications.Two, enact a new Debt Ceiling and Fiscal Responsibility Act, invoking Article 292 of the Constitution (which allows Parliament to set limits on borrowing/giving of guarantees by the government) in its preamble.

I think the way we have treated the FRBM Act underlines the need for a new Act with more teeth. An independent fiscal council, I don’t know. Much will depend on who mans it and in any case it is ultimately the responsibility of the Parliament.

In the current situation, where private investment is not coming in and you need public expenditure to pull it in, what is the way out.

The way out is if the government feels that the money that they are going to spend in the budget on productive purposes is not enough to kickstart the economy and they need to invest more, then let them take liberty with the fiscal deficit but at the same time keep the revenue deficit under check. How much they should relax it is something that needs to be determined in consultation with the RBI. Because they will have to look at the yields of government bonds and you can’t disrupt the market.

What about the issue of policy making credibility in the global arena, with rating agencies? Doesn’t that also matter?

But next year with OROP and Pay Commission, is there scope to cut revenue expenditure?

So how do you do fiscal consolidation in this situation?

It is always a challenge. So that is why you have to look at how much resources can you raise.