1971 Genocide: The Curious Case Of Bones Found In A Jessore Fertiliser Godown 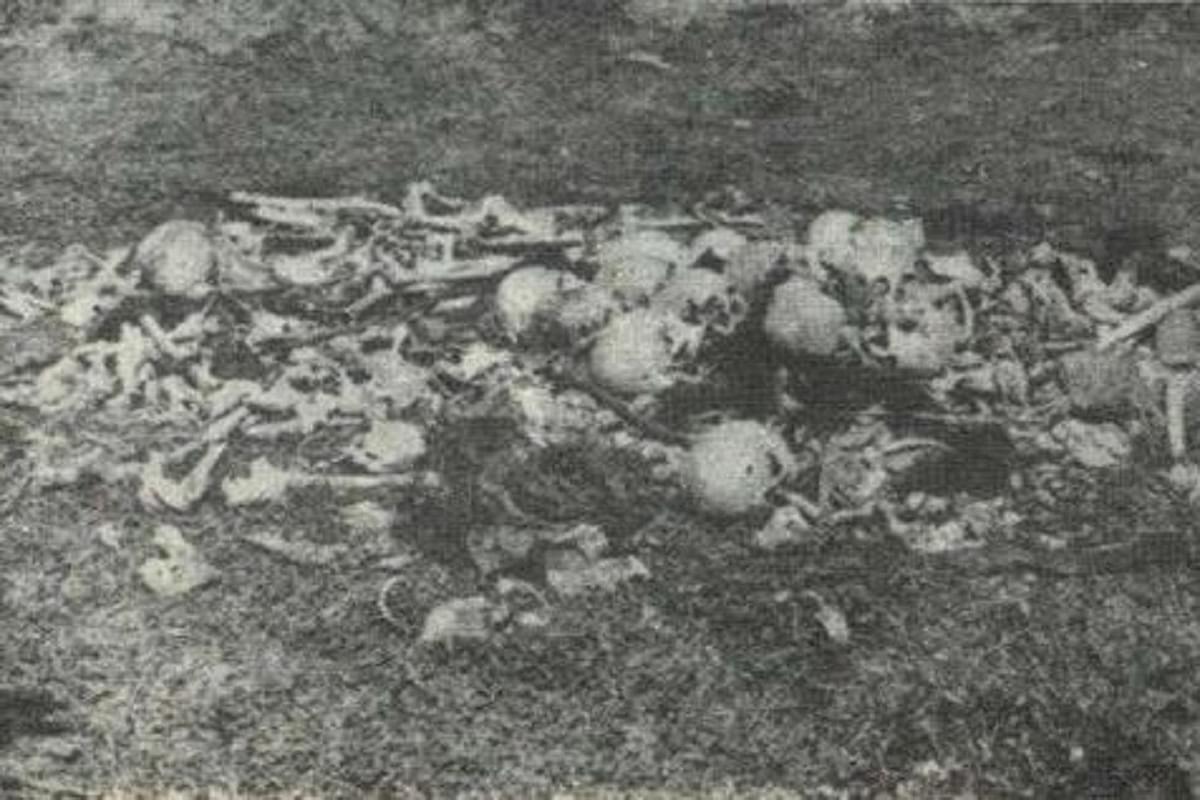 Jessore was liberated from the Pakistani Army on 6 December 1971. A few days later, film-maker S M Shafi took some photographs of the destruction there. Among them were the pictures of the Jessore Town Hall and the Chitra Cinema Hall, two famous landmarks of the city, that were destroyed in Pakistani shelling. Shafi’s photographs are available in the Muktijuddho e-Archive on Flickr, a collection of nearly 2,000 photographs with over 5.5 million views towards the latter half end of 2021.

Tucked in one corner of the archive is a nondescript photograph of victims' skulls and bones by Shafi, taken on 8 December 1971. Among the dozens, probably hundreds, of such photographs of the 1971 genocide, this could easily pass off as just another one, unless one reads the description, which reads: “Bones of Bengalis, killed by Pakistanis and their collaborators, found in Chachra Fertilizer Godown, Jessore”.

Given that the skeletal remains of the victims have mostly been found in open fields, water bodies or buried under the earth, the discovery of skulls and bones dumped in a ‘fertiliser godown’ is certainly puzzling.

During the Liberation War, the Pakistan army, with the help of local Bangladeshi collaborators, carried out a genocide of the minority Hindus in an attempt to rid the territory of Hindu presence and influence. The death toll, as estimated by various researchers, ranges from hundreds of thousands to a few million.

Such a death toll puts the 1971 Bangladesh genocide in the same league as the genocide of the Armenians and Greeks by the Ottomans during the First World War and the Holocaust by the Nazis during the Second World War. The genocide was eerily similar to the Holocaust in nature and scale, making an American official comment, “It is the most incredible, calculated thing since the days of the Nazis in Poland.”

The perpetrators of those genocides not only massacred the victims but also dehumanised them by denying them their last rites. Hundreds of tonnes of bones of the Armenian and Greek victims of genocide in Turkey were exported to France for industrial use.

The Nazis used a bone crushing machine at the Janowska concentration camp in Poland to grind the bones of the victims and prepare fertilisers. The question is whether the Pakistanis did the same by attempting to manufacture fertiliser out of victims’ bones.

The organisation set up several fertiliser godowns in East Pakistan, among other agricultural facilities. The godown in Jessore was set up in the locality of Chanchra, a predominantly Hindu neighbourhood and home to several historical Hindu temples. In 1971, the Provincial Essential Commodity Act came into force, which put fertilisers under direct regulatory purview of the federal government.

Jessore, in south western Bangladesh, is part of Khulna Division, which even today has a proportionately higher Hindu population than the rest of the country. In 1971, the region also provided several transit routes for the Hindu refugees fleeing to India, on whom the Pakistan army and its collaborators swooped and committed some of the most gruesome massacres. In Chuknagar and Dakra, for example, thousands of Hindu refugees were shot and hacked to death. The remains of the Hindu victims were rarely cremated. They were either buried hastily or left to be fed upon by scavenging animals.

Based on eyewitness reports, the Kolkata-based Bengali daily Jugantar reported on 3 January 1972 that around April-May 1971, three ships fully laden with looted items set sail for West Pakistan from Khulna. The question is whether the bones of the victims had been transported as well. Pakistan didn’t import a single gram of phosphate in the fiscal year 1971-72, a surprising deviation from all other years, while her domestic phosphate production grew, reporting a surprising 67 per cent growth in the next fiscal.

Animal bones are used as raw material for manufacturing fertilisers with high phosphatic content. Phosphate-rich fertilisers are essential for the cultivation of cotton. Phosphorus is a key element in improving the fertilisation of cotton plants and thus cotton yield. Pakistan’s cotton production, which had become stagnant in the late sixties, recorded a 30 percent increase in 1971-72.