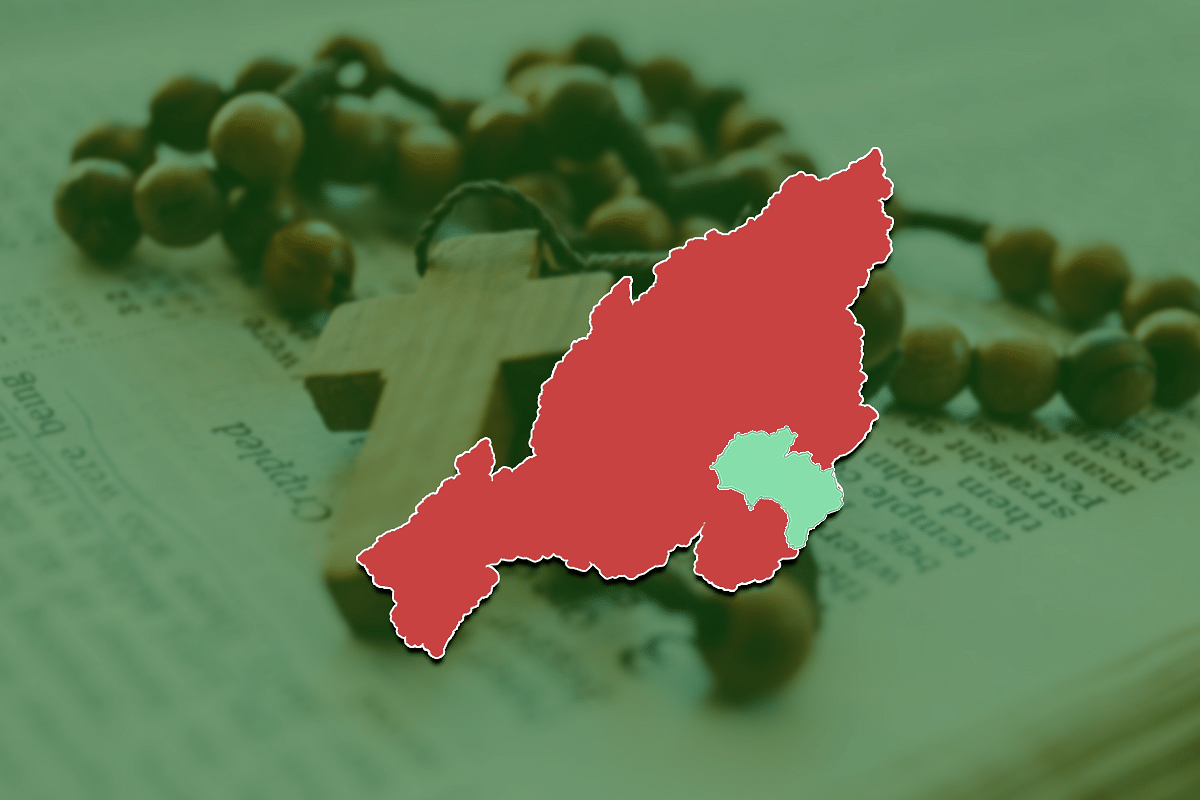 Christians in some tribal states of the North-East are still refusing to get themselves vaccinated, all because of a verse in the Bible!

Despite repeated appeals by church leaders, pastors, politicians and doctors, many Christians in Nagaland, Meghalaya, Mizoram and the hill districts of Manipur continue to cite this Biblical verse to refuse the Covid vaccine.

As a result, many districts in this state rank very low in vaccine coverage with Nagaland’s eastern district of Khipire bordering Myanmar gaining notoriety for becoming the country’s worst performing district in Covid vaccine coverage.

Only 21 per cent of Khipire’s 18-plus population have got the first dose of the vaccine. And just 16 per cent have been administered the second dose.

Almost the entire population of Khipire district, numbering an estimated eighty-one thousand, are Christians. And an overwhelming majority of them are Baptists, a major denomination of evangelical Christianity.

Khipire’s Baptists are generally ultra-conservatives who have lent their ears to a prophecy that the vaccine contains a microchip with the number ‘666’—the ‘mark of the beast’ according to the Book of Revelation, the final book in the New Testament—that will be implanted in their bodies.

And this ‘mark’, runs the popular prophecy, will prevent them from attaining salvation. This mark inside bodies of people, believe the ultra-conservative Christians, will herald the commencement of the ‘reign of the devil’ on earth. Since the Bible enjoins the faithful to resist this ‘mark of the beast’, the adults of Khipire have been refusing to get vaccinated.

The verse these ultraorthodox Christians quote is:

And he causeth all, both small and great, rich and poor, free and bond, to receive a mark in their right hand, or in their foreheads: and that no man might buy or sell, save he that had the mark, or the name of the beast, or the number of his name

But it's not only in Khipire that vaccinators have encountered widespread refusal. At the beginning of the vaccination drive earlier this year, many Christians in Meghalaya and Mizoram had also refused to get themselves vaccinated.

Their refusal that time was based on rumours that the vaccine vials are numbered, and people queuing up for the vaccines are also being allotted numbers. These numbers, believe the obscurantist Christians in the tribal states, are the ‘marks of the beast’.

As a result of these rumours that the ultra-conservative Christians believed in, vaccine coverage in Meghalaya, Mizoram and the Christian-majority hill districts of Manipur remained much lower than the national average till a few months ago (read this).

The efforts in these three states have started bearing fruit and the vaccination drive has picked up over the last couple of months, even though pockets of vaccine refusal remain.

But the refusal is intense and widespread in Nagaland’s Khipire district which also features at the bottom of the literacy rung. Low literacy, combined with poverty and backwardness and the fact that many parts of the district are inaccessible, makes it easy for obscurantist clergy to convince the people about the ‘mark of the beast’.

Khipire’s district immunisation officer, Dr K Pewezo Khalo, said that despite their best efforts, many continue to believe very strongly in the rumours about the vaccines containing a microchip with the ‘mark of the beast’ on them.

“Not only unlettered people, even some educated people believe in this rumour. Most unfortunately, even a section of health auxiliary staff have refused to get vaccinated. Vaccine refusal is higher in the rural areas, but we have faced this (refusal) in the district headquarters as well,” he said.

The health authorities have been circulating leaflets, audio and video messages in the local dialects of the Sangtam, Sumi and Yimkhiung tribes (of Khipire) debunking the rumours and urging people to get themselves vaccinated.

Nagaland state immunisation officer Dr Ritu Thurr said that the vaccination drive has hit a wall in Khipire. “We cannot compel people to take the vaccine and we have not met with much success in convincing them. The ‘microchip’ rumour doing the rounds in the district is very strong and has a huge number of believers despite our best efforts to debunk such nonsense,” he said.

The Nagaland health authorities have put out messages by prominent pastors, doctors, academics, government officials and civil society leaders on social media (see this) urging people to take the vaccine and not believe in rumours. But such efforts have been largely futile so far.

The Nagaland Baptist Church Council (NBCC) has also issued strong appeals urging people not to believe in the baseless ‘microchip’ rumours. NBCC general secretary Reverend Zelhou Keyho called upon the people not to allow their faith to “become a mockery”.

Other prominent clergies have also issued similar appeals repeatedly over the past few months. But the appeals seem to have few takers among the people of Khipire who also believe that those who take the vaccine will become sterile within a couple of years.

The ‘mark of the beast’ has been used by ultra-conservative Christians of the region in the past to oppose some government programmes. For instance, a large number of Mizos had refused to get themselves enumerated for the Aadhar card more than a decade ago fearing that the number on the card would be the ‘mark of the beast’ (read about that Aadhar refusal here).