A Chance For Peace: Art Of Living Brings Together Families Of Martyrs And Militants Of Kashmir 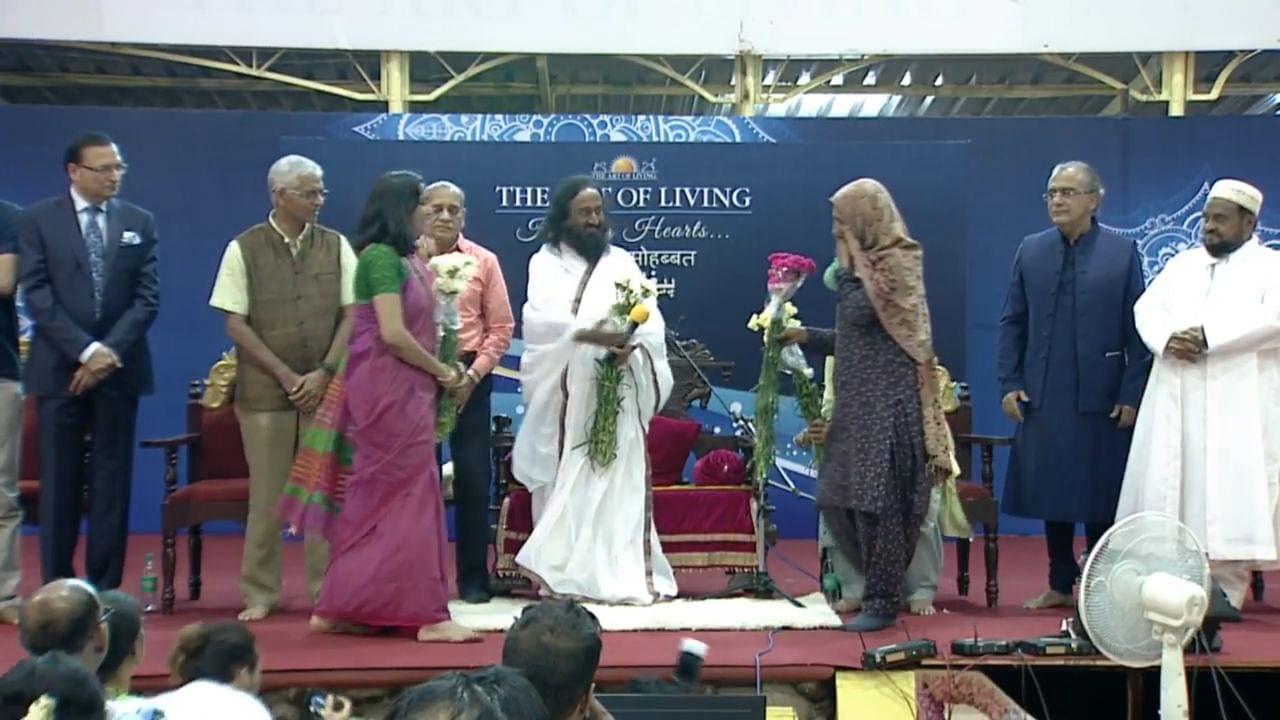 It is a battle that has been going on for decades, spanning back to the time of Independence, with some of the people insisting on self-determination, stemming from the feeling of having been locked down into a system that was not what was desired. When a seemingly concerned hand extended from across the border to the simple folks, with the promise of helping them realise their dreams and much more, it only added fuel to this yearning, manifesting in ways that were far from desirable.

The Kashmir issue we are talking of here, has so far appeared to have no solution, peace proving to be elusive. The ensuing militancy has resulted in the loss of innocent lives and destruction of the economy, culture and the physical environment of the region. It has increased the number of martyrs, leaving behind not just grieving families but also the question – does the cause justify the result?

Viewed from the human angle, the pain is intense, the results unforgivable, the outcome inciting more hatred and a need to avenge. The vicious circle continues, spinning the region into an endless bloodbath with no respite, no hope.

It is against this backdrop that the Art of Living (AOL) decided to initiate a novel intervention by bringing together the families of the martyrs of the defence forces as well as the families of slain militants, and enable a meeting on a neutral ground.

The objective of the meeting between the families of 100 slain militants and 40 martyrs at the Art of Living International Centre, Bengaluru, was bringing into perspective the human angle, laying bare the harsh truth that whichever life is lost, the grief, the pain, the personal loss for the innocent families is the same. While the martyr families had sent their sons to defend the nation, the militant families had lost their sons who were misled into believing that they were fighting for a just cause.

What followed was a heart-rending sharing of feelings between the families; and what was more profound was the realisation that victimhood was a feeling common to both sides. This led to an unbelievable acceptance and forgiveness, with families deciding to leave the past behind and move forward in a spirit of camaraderie.

Dr Priya Sankalp, widow of martyred Lt Col Sankalp, said, “I came here thinking I will get healed, having suppressed so much pain. But what I was confronted with was the presence of the Kashmiri families who were the sole reason for my pain. The shock and anger I felt on realising that I was being made a joke was intense. But when I met the women who had also lost their sons, the anger transformed into understanding, for, the pain felt on both sides was the same. Instead of anger there was forgiveness. We have forgiven each other and I am ready to assist in whatever way I could to bring peace in the valley.”

Adding that all those who had died were merely following orders they received, she further stated, “Why should we be in this state where we cry together, forgive each other? Why can’t we rise above these differences?”

Reiterating Sankalp’s statements, Neha Tripathy, widow of another slain armed forces member, said, “I came here after having been told there was a programme for martyrs. If I had known I had to meet Kashmiri militant families, I would not have come. Yet, after I arrived and met them, one of the mothers of the slain militants came to me and held my hand. The pain both of us felt on losing our loved ones connected us. There is now forgiveness from both sides.”

The reconciliation process also saw former militants sharing their thoughts. An interesting story was shared by a former militant, Farooq, who took to the gun in 1990, only to give it up after six years. “The entire Kashmir is not filled with terrorists as is the common perception. The media shows stone pelters but do not show why they are pelting the stones. The common impression is Kashmir is anti-India, yet in the valley you will find countless youngsters who are willing to do whatever they can for the country.”

Interestingly, the militant families who came to the AOL centre were threatened at gunpoint and asked where they were travelling to, as 80 per cent of these families had never left the valley earlier. Some agencies even tried to stop them from leaving. But leave they did, braving the possible threat, and reached their destination.

Indicating that there is love in every heart, but that when there is a wound, this love is distorted, AOL founder Sri Sri Ravi Shankar called for healing of this wound. “It is our responsibility to make them understand that holding the gun leads you nowhere. Only through communication one can move ahead.”

Given that this meeting is the first of its kind, Shankar said, “When all affected families of this violence come together in a spirit of forgiveness, in the knowledge that violence was inflicted not just on one side but on both sides, a new vision for a non-violent future would emerge.”

Incidentally, the work on reconciliation and reform was initiated by AOL way back in 2002 in the valley. Several skill development training centres organised by AOL, including one in Srinagar prison, has brought militants into the mainstream, with many having become entrepreneurs running businesses of their own. The meeting at the AOL centre is a continuation of the efforts made in 2016, which saw diverse stakeholders participating in a conference, “Back to Paradise”, involving stone-pelters, youth leaders, victims of militancy, Sufi saints, academicians and others.

Shankar sums up: “Connecting hearts is not a government’s job, but a job to be executed by the general public.”

If the recent meeting between the victims of the unrest in the valley marks the beginning of a new perception, there is certainly hope for the Kashmiris.