A Judgement That Changed Kerala: A Year On From The Sabarimala Verdict 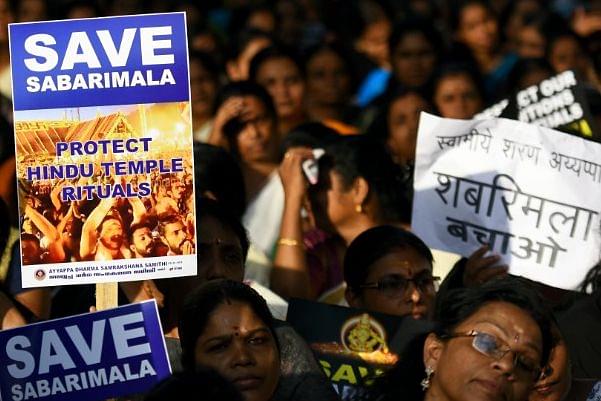 Ayyappa Dharma Samrakshana Samithi members hold placards during a protest against the SC verdict on entry of women into Sabarimala Temple, at Parliament Street, in New Delhi. (Photo by Amal KS/Hindustan Times via Getty Images)

On 28 September 2018, the Supreme Court of India pronounced its verdict on Indian Young Lawyers’ Association vs. State of Kerala, which concerned the entry of women between the ages of 10 and 50 into the Sabarimala Sree Dharma Sastha Temple.

The verdict and the subsequent developments in the state had led to social, political and cultural upheaval to an extent that was unprecedented and unexpected.

The story of the ultimate consequences of the verdict is yet to be written, with the review petition still pending with the Supreme Court.

For many faithful devotees, the verdict, and this day (28 September) represents a black day, a day of deafening shock where the highest constitutional court decided to egregiously violate the foundation of their faith in Swami Ayyappa.

The calls of Swamiye Sharnamayyappa, till then a call of faith and devotion, acquired shades of political dissent and became a battle cry against a state machinery that wished to violate the sanctity of a temple that Hindus, especially those belonging to Kerala, held dearest to their heart.

The obstinacy of the Kerala Chief Minister, Pinrayi Vijayan, meant that the situation in the state worsened as the temple opened in October. The attempted entry of Rehana Fathima, an ‘activist’ on 18 October 2018, worsened the situation significantly.

A few days later, the IPS officer who had led the protection for these activists, Inspector-General Sreejith, was seen praying tearfully in front of the deity. This, in essence, captured the sentiment of millions of Hindus across Kerala and India.

The most enduring image from the past few days: IG Sreejith, the man who led a squadron of policemen protecting two women to the Nadapanthal, in tears in front of Swami Ayyapa, today morning. pic.twitter.com/cJ5iNZVXFK

The ruling CPM, and more importantly, the Chief Minister, have since then been attempting to create an alternative narrative on the idea that the values of the ‘Navodhanam’, or the Renaissance movement that shaped Kerala in the early 20th century had to be ‘protected’ from the ‘designs’ of the ‘communal forces’ and their ‘B-team’, namely the Sangh Parivar and the Congress.

It seemed that the Chief Minister was insistent on women entering Sabarimala, using all possible pressure tactics and bearing the full force of the state machinery on the pilgrims, prompting even the Kerala High Court to intervene.

The state government sponsored a ‘Women’s Wall’ in a bid to ‘protect’ the values of the ‘Navodhanam’ on 1 January 2019.

Many Hindu caste and community organisations participated in the event, including the Sree Narayana Dharma Paripalana Yogam (SNDP), the primary caste organisation of the largest caste, the Ezhavas.

Early morning the next day (2 January 2019), two women in their early 40s entered the temple through the back door. The wife of the SNDP general secretary, Preethi Natesan, acclaimed: “We’ve been betrayed badly in the name of Navodhanam”.

The results were much more of a shock for the CPM than expected, with them barely scraping one seat — Alappuzha — out of the 20 seats in Kerala.

The Congress-led United Democratic Front coasted to victory in the remaining 19, riding on a wave of minority and majority consolidation. The CPM, with their absolute drubbing in the election, went on to at least admit that the Sabarimala issue affected their chances.

Since then, the CPM has attempted to regain their lost prestige and reaffirm their ‘commitment’ to the people of Kerala by conducting house visits. One can presume that they have heard quite an earful.

The last line on the Sabarimala issue has not been written yet. What it will end up being for Kerala polity and the Hindu community in Kerala is almost unpredictable. The review petition has still not been decided.

Until then, the fate of the temple, the faith of millions, and the state of Kerala will continue to be in an uneasy calm.