A ‘Pop Priest’ In Tamil Nadu Attempts To Divide People On Grounds Of Social Justice, Language 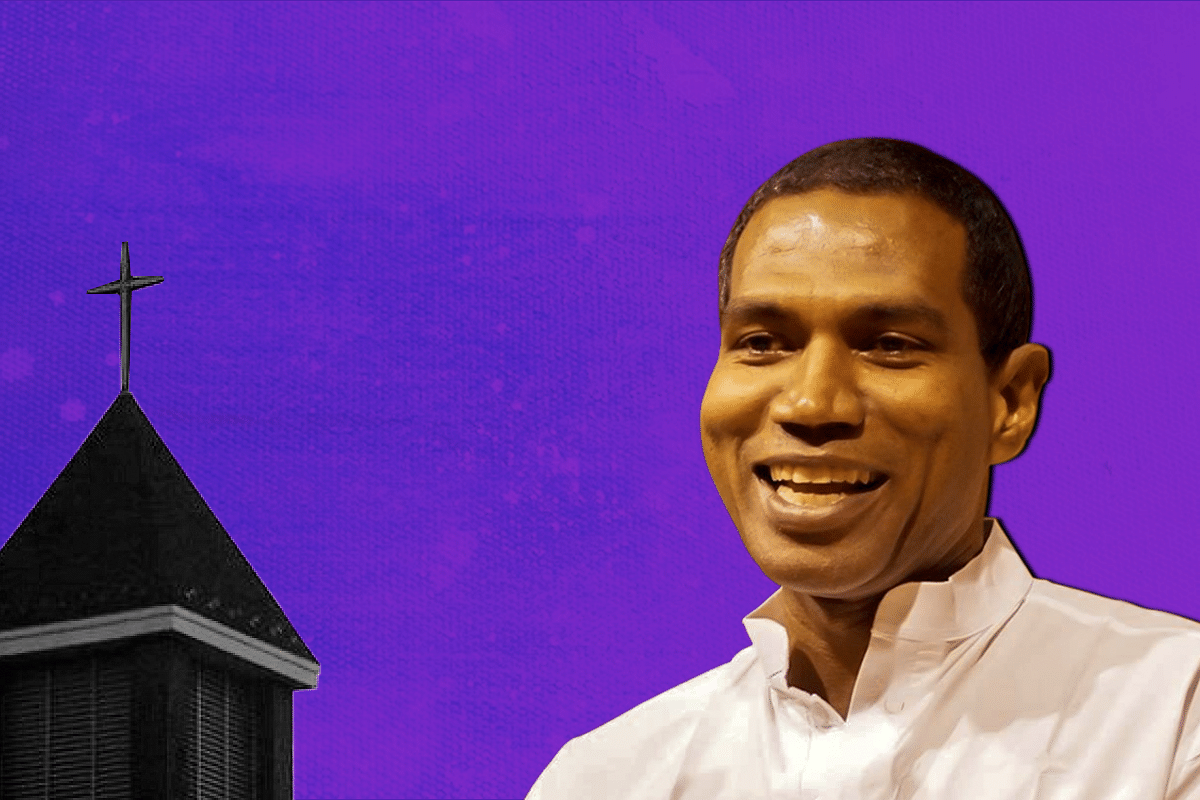 On 2 September this year, a video was circulated showing a Jesuit priest in Tami Nadu, Jegath Gaspar Raj, making a provocative speech at a meeting organised by the Viduthalai Chiruthaigal Katchi founded by Thol Thirumavalavan, member of Parliament from the Chidambaram constituency.

In his speech, Gaspar Raj urged backward-class people to approach the companies on Old Mahabalipuram Road in Chennai and demand that they be given a role in decision-making.

Urging his audience to seek social justice, he says upper castes dominate the decision-making process in these companies — manufacturing to Information Technology to services — and those seeking social justice “should hit them where it hurts them the most”.

“If they don’t give us a role in the decision-making process, we should ask them to quit the place,” he says and warns that western countries, where Christians were in a majority, could be roped in to create the same problem for them in those countries.

From promoting Thiruvasagam, a hymn in praise of Lord Shiva, to promoting Tamil arts and culture to taking up causes in the name of social justice and Tamil, Gaspar Raj, the founder of an NGO (non governmental organisation), Tamil Maiyam, has come a long way.

Currently, he is one of those elements in the state who has been actively backing various anti-government agitations in Tamil Nadu.

Most importantly, he has supported protests against the conduct of the National Eligibility-cum-Entrance Test (NEET) for medical colleges, for the closure of Thoothukudi Sterlite Copper plant, in opposition to abrogation of Article 370 that provides special status to Jammu and Kashmir and a host of other issues, all against the union government.

Currently, Gaspar Raj is seen as one of the “breaking India” forces who is attempting to divide and instigate people, going by comments against him on social media.

Initially drawn to Marxism, Gaspar Raj never fails to bring in the Tamil angle in whichever cause he espouses these days.

The 52-year-old Jesuit priest hogged the limelight a couple of times for different reasons. The first time he was in the limelight was in 2006 for his association with popular music director Ilayaraja in the making of “Thiruvasagam” --- a set of Tamil hymns composed by Shaivite bhakti poet, Manickavasagar.

“Thiruvasagam” was rendered in the oratorio form but Gaspar Raj marketed it as rendition in symphony. When challenged, he changed it to a rendition in “symphony oratorio”.

At least Rs 1.06 crore was spent on the project but he and those involved could hardly recover Rs 45 lakh from the sale of the compact discs and cassettes.

After this Gaspar Raj and Ilayaraja fell out and the priest didn’t even try to enter the work for a Grammy award. This rendition of Thiruvasagam, some experts felt, could have got a Grammy award under the classical choral (oratorio) category.

An Ilayaraja fan complained that when he took up the issue with the priest, the latter shot back telling him to make efforts on his own to send the work for a Grammy nomination. However, in a media programme last year Gaspar Raj praised Ilayaraja’s music knowledge.

The second time Gaspar Raj was in the limelight was during the launch of “Chennai Sangamam”, an event promoted by the Dravida Munnetra Kazhagam (DMK) government in 2007 to popularise Tamil art and culture.

Gaspar Raj’s Tamil Maiyam, in which Kanimozhi --- daughter of one of DMK’s founders and the late chief minister M Karunanidhi --- is on the board of trustees, was involved in the conduct of the festival along with the Tamil Nadu Department of Tourism and Culture.

Chennai Sangamam was held for a couple of years before a change of government in 2011--- when the All-India Anna DMK regained power --- ended it.

During the time when it was held, Chennai Sangamam was criticised for Tamil Maiyam’s links with the banned Liberation Tigers of Tamil Eelam (LTTE), the Sri Lankan Tamil organisation responsible for the assassination of former prime minister, Rajiv Gandhi.

Jaya TV had then run a programme linking Gaspar Raj with Nachimuthu Socrates, who was a fund-raiser for the LTTE. Socrates was arrested by the US Federal Bureau of Investigation in 2006 for attempting to bribe US State Department officials and for trying to purchase surface-to-air missiles.

Gaspar Raj also came into focus when the Central Bureau of Investigation (CBI) sleuths raided the Tamil Maiyam office in 2010 in connection with the 2G scam. The priest denied that his organisation had any links with the scandal over the allocation of spectrum to telecom companies.

After lying low since the CBI raids, Gaspar Raj has made a come back in public fora in the last couple of years, particularly after the death of former chief minister Jayalalithaa.

When Gaspar Raj caught the media’s attention in Tamil Nadu during the launch of “Thiruvasagam”, little was known about his past record.

According to Rajasingham, the Jesuit priest was instrumental in getting the late Karunanidhi closer to the LTTE after both parties had fallen out.

Gaspar Raj’s career took off when he joined the Philippines-based Catholic Radio Veritas as director of Tamil service for a salary of $200. Radio Veritas has been accused of protecting, promoting, providing succour, and cover to the LTTE along with the Sri Lankan Catholic Church and Tamil Catholic priests.

Radio Veritas helped Gaspar Raj to hog the limelight as the medium was used by the church to promote its own brand of politics.

As Radio Veritas had access to Jaffna through the Catholic church, Gaspar Raj moved freely in the war zones and fed his listeners with pro-LTTE versions of the Sri Lankan civil war. Though the news lasted for only five minutes, it made a strong impact on the Sri Lankan Tamils.

Radio Veritas gained more following after the Sri Lankan government imposed censorship and this helped Gaspar Raj to a great extent. Initially, he declared that Radio Veritas didn’t support the LTTE but changed his stance following pressure from Lankan Tamils.

This made him popular and thanks to his friendship with another priest, Chandirakanthan of Jaffna University, who supported the LTTE, Gaspar Raj was able to establish closer contacts with the Tigers.

With Chandirakanthan settling in Canada, Gaspar Raj got closer to the Tamil diaspora in Europe, America, and Australia. The LTTE, on its part, decided to utilise him for fund collection.

He then travelled across Europe and collected funds for the Tamil Rehabilitation Organisation, the LTTE’s fund-raising arm. Subsequently, he developed differences with some LTTE leaders when he joined hands with TRT Tamil Alai radio to raise funds for orphans of the Tamil Eelam.

The Jesuit priest is estimated to have collected over a million dollars. Rajasingham, quoting a source in Paris, says Gaspar Raj collected over $600,000 and this was later transferred to his own account in Manila, Philippines.

To date, Gaspar Raj has not made public the amount that was collected to help the Eelam orphans and how many have actually received financial help.

It was after this that he began his foray in Tamil Nadu with his Tamil Maiyam. Rajasingham says the LTTE tapped Gaspar Raj again to arrange for a meeting between its leaders and the then prime minister Manmohan Singh.

The “Pop Priest” is under public scrutiny for his various provocative comments. That could be one reason why he has deleted some of his tweets, including warnings against some well-known personalities like Mohandas Pai who had welcomed Narendra Modi’s return to power in May this year.