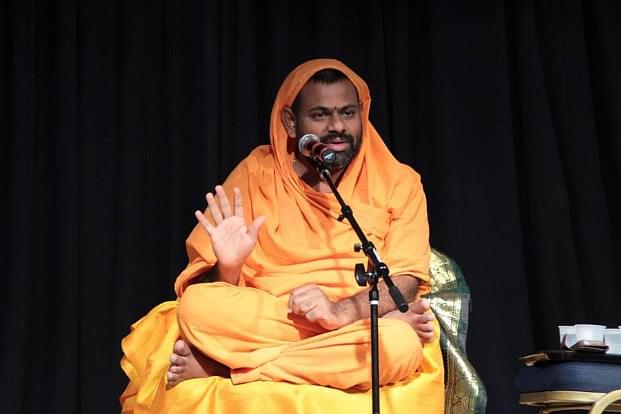 The Telangana government has recently been on overdrive in countering the protests of one Swami Paripoornananda, the head of a fairly well-known religious institution in Telangana called Kakinanda Sri Peetham.

The state police on Tuesday (10 July) decided suddenly to act on allegedly provocative statements made by the spiritual leader in November 2017 and kept him under house arrest. He was then taken into judicial custody and externed to Kakinada. He has been barred from entering Hyderabad without police permission.

The police action comes right before a planned march titled ‘Dharmika Chaitanya Yatra’ that Paripoornananda proposed to take out protesting the defamatory statements made by film critic Kathi Mahesh against Hindu icons and deities. Permission had been taken from the state government for the walk, which would have had people led by the Swami walking from a temple in Bodduppal to one in Yadagiri.

Swami Paripoornananda had condemned statements made by Mahesh that defamed Hindu religious entities. Mahesh had made slight remarks on the Ramayana and Hindu religious figures on a television channel debate. Based on a complaint filed by members of Hindu organisations, police registered a case against Mahesh under various Indian Penal Code sections, including 295A (Deliberate and malicious acts, intended to outrage religious feelings) following which he was externed from Hyderabad city for the next six months under the Telangana Prevention of Anti-Social and Hazardous Activities Act.

Permission for the walk that was granted on the morning of 7 July was revoked on the morning of 9 July (on the day that the walk was to take place). While the news of Mahesh being externed was widely covered by most national media houses, some even calling it a ‘vanvas’ (residence in a forest), the house arrest of the religious leader received minimal coverage.

A local channel that has its network in both the Telugu-speaking states, which covered the arrest of Swami Paripoornananda, has allegedly been informally banned from being telecast in cable TV networks. The channel was among the very few to have covered the issue in favour of Paripoornananda.