A Tamil ‘Right Of Centre’ Website That Is Unmasking Biased, Fake News Providers 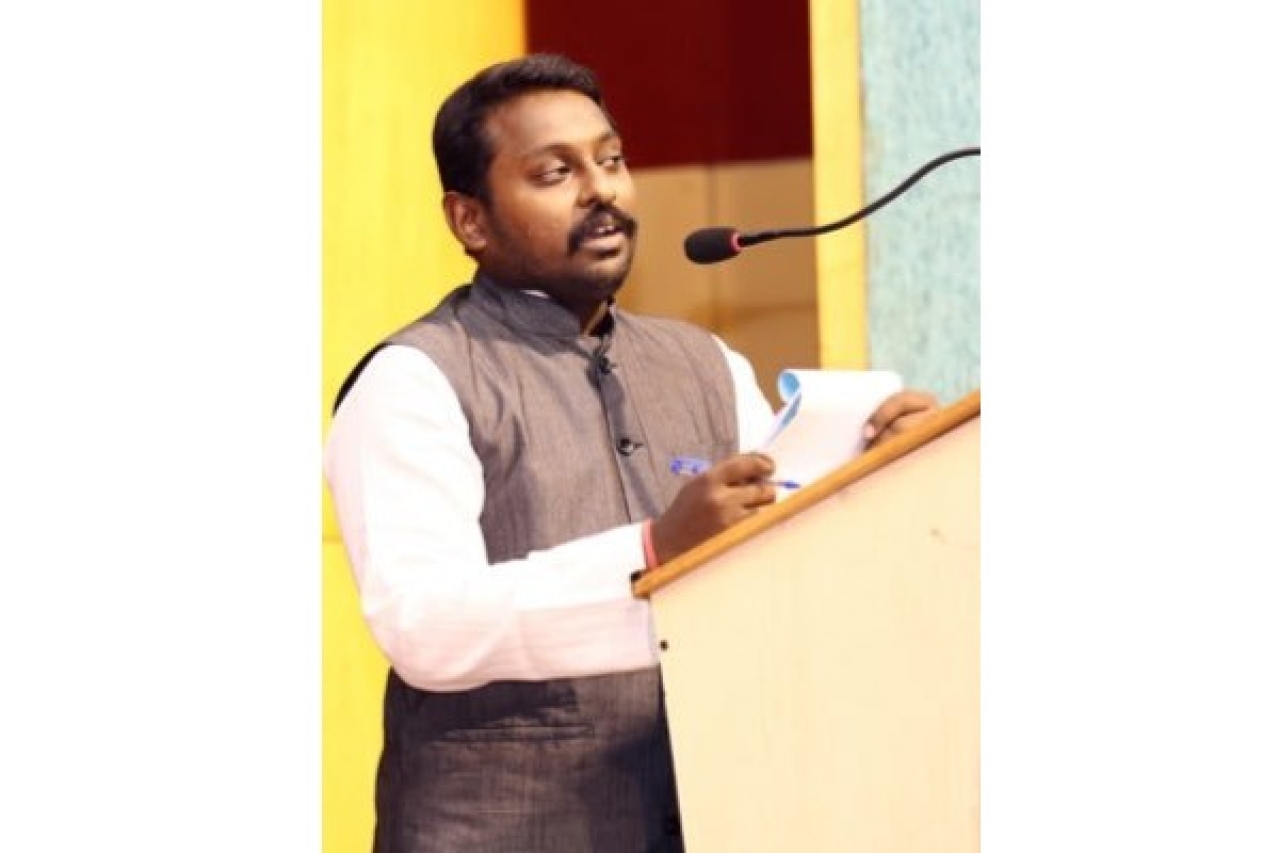 The media in Tamil Nadu has often been seen as biased. Particularly, the mainstream media (MSM) has been seen toeing the left of centre line. What this has resulted in is that seldom do you find an objective presentation of key events in the media.

Be it the jallikattu protests or the Cauvery water dispute or any issue like the state governor’s name being dragged into a controversy - the MSM in Tamil Nadu has been found either carrying out a trial by media or just presenting only one side of the issue.

Such a situation brought forth a demand for a media organisation that could be neutral or say both sides of the story. People in Tamil Nadu are appearing to be searching for an objective presentation of news. It is one reason why viewers have catapulted Polimer News to the top slot.

Similarly, it is also the reason why people are looking up to start-up media firms to present the right of centre views and developments. In this respect, a Tamil language news start-up Kathir, launched by S G Suryah who is vice-president of Tamil Nadu Bharatiya Janata Party (BJP) youth wing, has been trying to address most of these concerns to some extent.

“A majority of the news narratives in Tamil Nadu are either aligned to the left or reflect the agenda of the Dravidian parties. If we read versions of some English media organisations in Tamil Nadu, we will find a vast difference in their narratives,” says Suryah, in an interview to Swarajya.

Having understood the motive of agenda-driven journalism that is influenced by Left and Dravidian parties, Suryah wished to create a media platform that was non-left in Tamil Nadu.

“We have a news section in our website exclusively to expose fake news being peddled by the MSM,” he says, adding that such fake news become a sensation within a few hours.

“Even before a news development is analysed, MSM peddles its fake news along with the social media. The best examples are the recent ones on Pongal holidays and NEET exam centres,” Suryah says.

On the NEET issue, media reports said that most students in Tamil Nadu were being forced to write exams outside the state. In both cases, the reports were fake and the fears exaggerated.

“Again, a few months ago Defence Minister Nirmala Sitharaman called the army ‘my parivar’ but the MSM in Tamil Nadu misinterpreted it to say she was referring to the Rashtriya Swayamsevak Sangh and the BJP. The Defence Ministry came up with a clarification which the MSM failed to carry,” he says.

On another occasion, the MSM said that BJP national secretary H Raja had gone missing but he appeared on stage at a Hindu Munnani function, the next day.

“Even in the case of (Tamil movie super star) Rajinikanth, the MSM found fault with his question, ‘which seven people you are talking about’ as he was totally unaware of the development with regard to the convicts sentenced in Rajiv Gandhi assassination case. The media put out reports saying he doesn’t know anything about the seven people though he has good relations with their advocate,” says Suryah.

The MSM’s approach on the #Metoo issue is regrettable. “Singer Chinmayi who alleged that lyricist Vairamuthu sexually harassed her had to face tough questions from the media. On the other hand, Vairamuthu, who has been accused of such acts by a few more women, hasn’t been brought in front of any media or camera yet,” he adds.

The problem with Tamil media is that its newsrooms no more have people of different views. “Most of the newsrooms have people who hold biased views. That’s why a start-up media like ours has been able to reach out to a large section of the people within a few months of its launch,” says Suryah.

Kathir doesn’t come up with breaking news and believes in providing “right” news. “We can easily understand the MSM propaganda, when they collectively give too much importance to a singular issue. We take our time, do some fact checking and then come out with truths that counter reports generated by the Left ecosystem,” the BJP youth leader says.

Starting from honour killings to #Metoo allegations, the Tamil MSM picked issues of its choice. “That is the weakness of Tamil MSM and our strength. We carry news stories that the MSM ignores or refuses to carry. We also take help from English news media like Swarajya, OpIndia, The News Minute, Republic, Times Now and Rightlog besides the social media,” says Suryah, adding that Kathir has also carried exclusive stories on development schemes launched by the central government.

There are some developments in Tamil Nadu where the Narendra Modi government has allocated Rs 2,333.88 crore to upgrade hospitals and medical colleges in the state in the last four years that have never been reported by Tamil MSM, regrets Suryah.

Similarly, Neyveli Lignite Corporation launched three 100 MW solar projects at an investment of Rs 1,302 crore on the initiative of the Modi government. “The central government has approved a plan to link Palar and Pennar rivers, a scheme that was delayed for 10 years. There are many such schemes that the MSM doesn’t want to report,” he adds.

In Tamil Nadu, the MSM is spreading pessimism. “It is a dangerous trend. Kathir attempts to tell the people about the good efforts of the central government like the MUDRA loan scheme for small traders, the Sukanya Samridhi Scheme for women and then, the PM’s housing scheme,” the BJP leader says, adding that numerous schemes that have benefited people of the state have not been highlighted.

“Our job is to take reports of these developments to the people and tell them how external forces are spreading hate and fake campaign against the Centre,” says Suryah, adding that Kathir articles on central government schemes are well received.

“There is also a great demand for news reports that debunk WhatsApp and other fake ‘forwards’. We have kind of evolved as a platform that can be looked up for exposing fake news propaganda,” the BJP leader says.

The best responses to Kathir have been for the #Metoo stories it carried. “We were the first in Tamil media to cover such stories when they started breaking out in the social media. We understood that the MSM will not cover it given their bias. Kathir and Vaanaram were the first websites in Tamil to highlight the issue,” he says.

The Tamil MSM took nearly a week to pick up the #Metoo stories after the English media began highlighting them. “Our servers crashed when our #Metoo stories became a hit. We had to upgrade our servers. We never expected that Kathir would have such a reach when we initially ran the stories,” says Suryah, beaming with pride.

The new right of centre narration launched by Kathir has led to many trolls trying to deride the website and ensure that such reports don’t reach the people. “We face a lot of trolls and abuses but we ignore the hate inclined ones. But we take constructive criticism seriously and try to improve things in that regard,” he says.

Suryah feels that the BJP is developing an ecosystem in Tamil Nadu that is not influenced by Dravidian and Left ideologies. Without developing such an ecosystem, it would be difficult to counter such reports. “Efforts are required to fight fake news,” he feels.

Referring to issues such as protests to close Sterlite Copper plant in Thoothukudi, Suryah says Kathir believed that external forces were at play to shut the plant that was responsible for the livelihood of over 30,000 families. “And the media in general has failed the people of Tamil Nadu on this issue,” regrets the BJP leader.

What Suryah finds worrying is that the youth are being misled by a hate campaign against Modi. “Many youngsters who voted for Modi in 2014 have been brainwashed by these fake news,” he regrets, hoping that they would soon return to the national fold, realising the agenda of the Left and Dravidian ideologists.

Suryah, having studied law at Pune ILS Law school, is also a member of the Institute of Company Secretaries of India and Chartered Institute of Arbitrators, UK. He was encouraged to join the Rashtriya Swayamsevak Sangh and BJP by his grandfather, a Hindu Maha Sabha activist.

Suryah, who met Modi when he was Gujarat chief minister, said the leader understood social media way better as early as 2012.

His met party president Amit Shah in 2013 when he was the coordinator for “Run for Unity” marches, and in 2016 when he headed BJP’s digital campaign in the state elections. “Modi and Shah are pragmatic and result-driver personalities, which makes them the most sought-after. Anyone would want to work under them,” he says.

Get Swarajya in your inbox everyday. Subscribe here.
Tags:
865 Shares