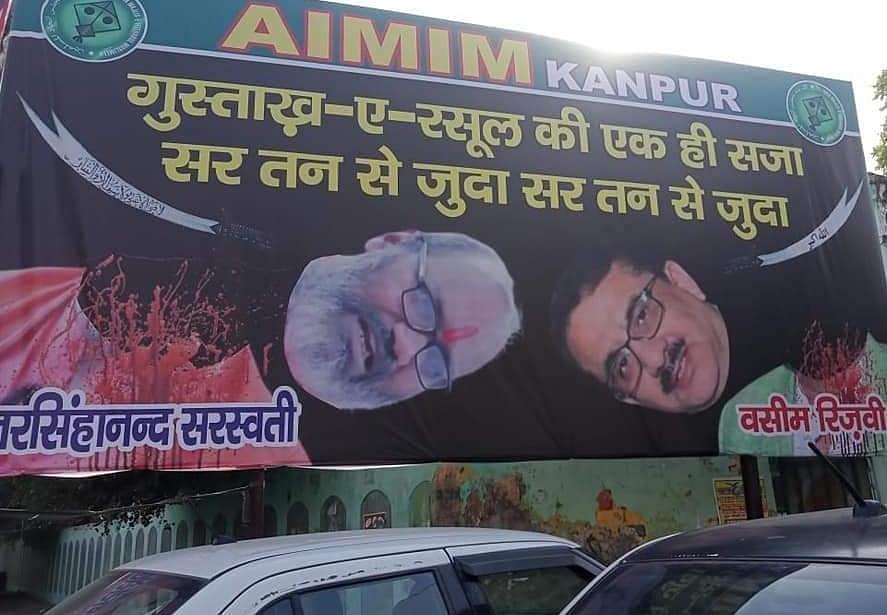 The poster in Kanpur that called for beheading of a Hindu priest.

In Uttar Pradesh’s Kanpur district, a large hoarding asking for beheading of two men accused of blasphemy was recently put up at a street.

After a picture of the hoarding went viral on social media, drawing huge outrage, the Kanpur police removed it. Later, the police filed a case against the people identified behind it.

The poster bears the name of ‘AIMIM Kanpur’, where AIMIM refers to Majlis-e-Ittehad-ul-Muslimeen, a political party helmed by Hyderabad-based Asaduddin Owaisi who, along with his brother Akbaruddin Owaisi, has been accused of radicalising youths, by other parties.

The Kanpur police, through their verified Twitter account, said on 12 April that a first information report (FIR) had been registered against unidentified people at Chamanganj police station under IPC sections 153A (creating enmity) and 295A (hurting sentiments).

The two men against whom the beheading call was made are Yati Narasinghanand Saraswati, priest of a temple in Uttar Pradesh’s Ghaziabad district, and Waseem Rizvi, former chairman of UP Shia Waqf Board.

Some days earlier, men at his temple in Dasna were caught thrashing a minor Muslim boy on camera after asking for his name and identity. Saraswati’s temple in Dasna has a hoarding put up at the entrance saying “Muslims are prohibited from entering the premises” (as translated).

Rizvi, on the other hand, last month, filed a petition in the Supreme Court asking for removal of 26 verses from modern translations of Quran, alleging they promoted enmity and terrorism.

Yesterday, the apex court dismissed his petition as “absolutely frivolous” and slapped a fine of Rs 50,000 on him. Over the last month, multiple FIRs have been filed against Rizvi across India for 'hurting sentiments'.

Saraswati and Rizvi have been subject to massive outrage from the Muslim community for 'blasphemy', seen as a serious offence in the community. In India’s neighbour Pakistan, blasphemy is punishable by death. Demands for a similar law have been rising in Bangladesh.

Rallies featuring children and adults carrying posters of Saraswati and shouting slogans of ‘sar tan se juda’ have surfaced on social media. A recent protest rally in Bareilly against the Dasna priest too featured beheading calls.

Instagram users have begun to upload videos vowing to execute the beheading threat.

In 2019, UP resident Kamlesh Tiwari was murdered by fanatics at his office for a ‘blasphemous’ pamphlet he circulated in 2015. Tiwari was put in jail under the stringent National Security Act till he got relief from the Supreme Court.

Tiwari’s murder was preceded by riots over his comments in West Bengal, and a series of protest rallies across India with similar ‘sar tan se juda’ slogans.

After Tiwari’s murder, investigators said that the killers had wanted to behead Tiwari and make a video with his chopped head. However, they ended up slitting his throat and pumping bullets into his body.

Tiwari’s murder was said to be the first murder over blasphemy in independent India. The more widely known death over blasphemy in British India was that of Arya Samaji Mahashay Rajpal, who was killed by a young illiterate man named Ilm-ud-din despite being acquitted by the court for the offence.

When Pakistan was carved out of India in 1947, Ilm-ud-din went on to be honoured as ‘Ghazi’ there and had roads and institutions named after him.

Of late, blasphemy has emerged as a reason behind some of the most terrifying killings in various parts of the world. Last year, French schoolteacher Samuel Paty was beheaded by an 18-year-old man after an online campaign was run against Paty for alleged blasphemy.