Agni V and Geopolitics on Peroxide 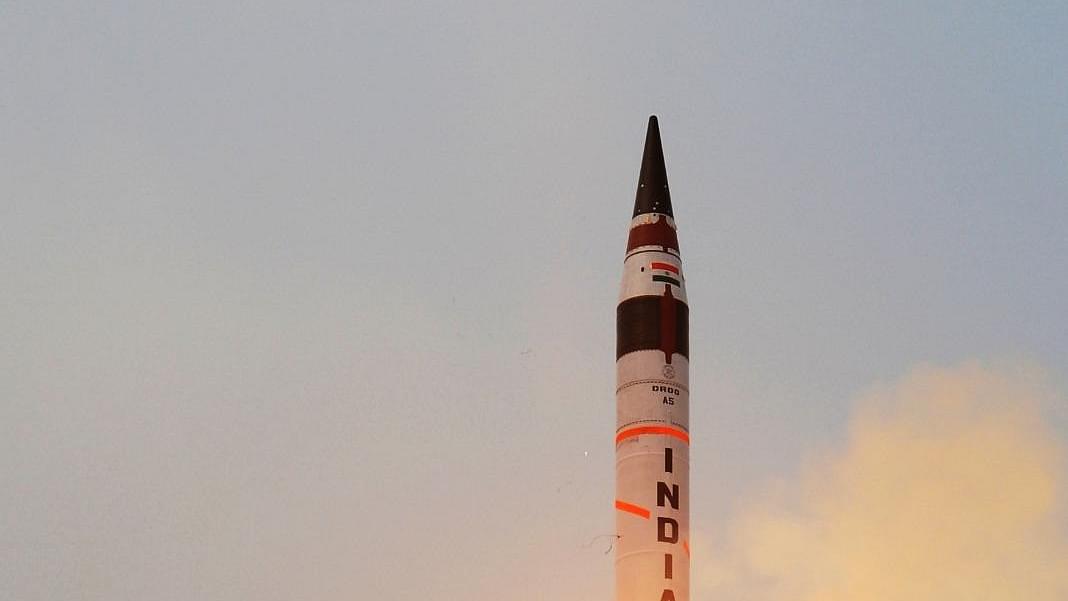 In the Agni-V, China knows India has a system that it won’t be able to stop or locate given that it can easily be fired from anywhere in India to reach anywhere in China.

It was kept away from this year’s Republic Day parade since in India we don’t believe in ‘grating’ our guests especially given Obama’s call for a world free of nuclear weapons. But now that Obama had returned to Washington via Riyadh, it was time again to test India’s first Intercontinental Ballistic Missile (ICBM) the Agni-V, capable of delivering a 1.5 ton nuclear payload at least 5500 kilometres (km) away. It was no ordinary test since this was the first time that the Defence Research and Development Organization (DRDO) was ‘cold launching’ an actual 50 ton ICBM from a canister.

Missile ejection tests with dummy missiles had been done earlier, but there’s nothing like the real thing as they say. The success of this test has sent out a signal worldwide about the sophistication of Indian missile capability in terms of reliability, survivability and accuracy. Not only is India moving towards deterrence parity with China, but it is also indicating to Indian Ocean Region (IOR) countries that it can shut down military or commercial activity in any part of the basin quite quickly and effectively.

While this Saturday morning’s test was the third consecutive successful test of the missile itself, it was the first time the Agni-V was being tested in a so called ‘wooden round’ configuration. A ‘wooden round’ in military parlance refers to a missile sitting in a sealed canister in ready to fire condition even as that canister may be transported, stored or stowed till the missile is actually fired. In essence a near maintenance free system that can be moved easily and fired on command without any real preparation for even periods of up to 10 years. When you have a 50 ton nuclear capable ‘wooden round’ ICBM it conveys a certain seriousness to your advsersaries and allies alike about the survivability of your strategic strike capabilities.

After all the Agni-V’s canister itself will sit atop a road mobile ‘transport-cum-tilting vehicle’ (TCT-5) which will move it around India’s highway network looking not too dissimilar from a standard commercial trailer, especially when viewed by something peering down from the heavens above. In this age of space based surface scanning radar, India has opted for deception coupled with mobility to prevent its road mobile ICBMs from being located easily. In the past decade India has found rail-mobile configurations of the Agni-2 and Agni-3 somewhat complex to operate and is now moving towards canisterised road mobile systems like the Agni-V. A canisterised version of even the Agni-IV is expected to be unveiled in the near future.

The canisterised configuration will also allow Agni-V to be fired from relatively unprepared strips since the missile’s own first stage solid rocket motor will fire up only when a gas generator at the bottom of the canister ejects it clear of the canister to a height of about 30 metres from the launch pad. This greatly reduces fears about a launch surface not being able to withstand the blast from the rocket engine and allows even relatively weak ground surfaces to serve as a launching area. Taken together the mobility and stealth of a canisterised road mobile Agni-V system will create great uncertainty in the mind of an adversary harbouring thoughts of launching a first strike on India.

Not only is the Agni-V a ‘wooden round’ it also carries a serious payload which will allow penetrative aids to be carried in addition to a warhead in order to get past emerging anti-ballistic systems (ABMs). The three stage Agni-V’s third stage is a conical motor which is tailored to counter mid-course interceptors in space of the variety China first tested in 2010. The re-entry vehicle sitting atop the Agni-V also boasts some manoeuvrability.

Moreover the Agni-V’s inertial navigation system (INS)consisting of a ring laser gyro backed by a MEMS based magnetometer for redundancy give it more than sufficient accuracy in the counter-city or counter-industrial area role. Agni-V’s INS can receive updates from at least three satellite navigation systems including India’s own Indian Regional Navigation Satellite System(IRNSS) which is set to become completely operational this year itself. Even in the absence of a satellite signal to remove accumulated errors, Agni-V’s INS will give sufficient accuracy to destroy China’s Eastern Seaboard ‘economic miracle’.

China intoduced its first ‘wooden round’ ICBM in the form of the DF-31 in 2006. India is now on course to symmetrically match China with the Agni-V headed for induction after two more tests in canisterised configuration by the end of next year. In the Agni-V, China knows India has a system that it won’t be able to stop or locate given that it can easily be fired from anywhere in India to reach anywhere in China. In fact launches of the Agni-V thus far are suspected to be depressed trajectory launches which sacrifice range for reaching targets quicker.

This morning’s launch was to an apogee of 600 km which is suspiciously low for a vehicle of the Agni-V’s class if it has indeed been tested out to its declared max range of around 5500 km. More likely its launch profile of today was not really its ‘minimum energy trajectory’ and the Agni-V could easily travel appreciably beyond 5500 km if so required bringing all of Western Europe and Japan within targeting range. Depressed trajectories also allow an ICBM to stay below the radar horizon for a longer period of time.

The direction towards which the Agni-V has been launched is in itself significant. Today’s test saw the Agni-V splashing down in the Southern Indian Ocean somewhere between Diego Garcia and the Western Australian coastline both of which host American ‘listening’ facilities. Indeed the Americans flying their ‘Cobra Ball’ planes out of Diego Garcia must have certainly observed today’s test.

The Agni-V in a sense was a signal to all militaries operating in the region that India has an accurate strategic payload capability which when coupled with the Indian Navy’s growing maritime domain awareness network in the IOR will allow India to ‘shut down’ aim points within 20 minutes of deciding to do so, for that was the time taken for today’s Agni-V to reach its designated target area. And as India’s IRNSS grows in scope, it would be able to do this with even conventional payloads. Any string of pearls is rather fragile to try to choke India with. ICBMs after all are politics on peroxide.