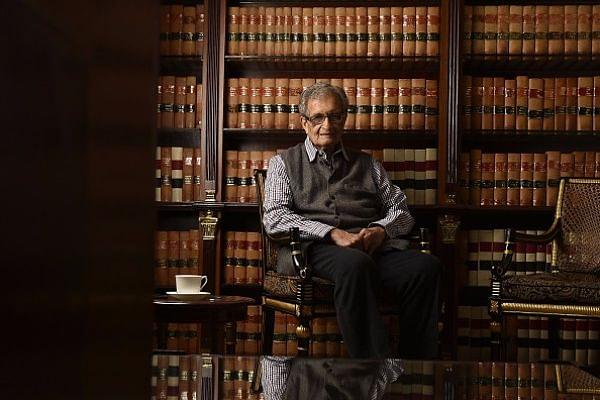 When Nobel laureates want to question a decisive mandate, they should at least use legitimate arguments. Sadly, that is not the case with Amartya Sen, who has written a polemical piece in The Indian Express indirectly questioning the legitimacy of massive victory of the Narendra Modi-led National Democratic Alliance (NDA) in the 2019 Lok Sabha elections.

Consider some of the arguments he used.

In 2014, Gopalkrishna Gandhi questioned Modi’s mandate as Bharatiya Janata Party (BJP) got 'only' 31 per cent of the popular vote and yet got a Lok Sabha majority. This time, the popular vote count of the BJP rose by more than a fifth, to 37.4 per cent. But Amartya Sen had this to say: “The BJP won a majority of parliamentary seats, but it received only 37 per cent of the votes.”

So, an improved mandate — and the NDA combined got 46 per cent — is still not a mandate.

Sen then went on to suggest that it was opposition disunity that cost them 2019. He wrote: “Given the relative strength of the Bharatiya Janata Party, should there have been more alliances among the Opposition parties? Should the Congress have had more coordinated agreements with other anti-BJP parties, such as the Bahujan Samaj Party and the Samajwadi Party in Uttar Pradesh? Should there have been an alliance between the Aam Aadmi Party and Congress in Delhi, or between the Congress and Prakash Ambedkar’s party in Maharashtra?”

Legitimate questions, it seems. But the numbers give the lie to Sen’s assumption that greater opposition unity would have defeated Modi. In Uttar Pradesh, the BJP got 49.6 per cent of the vote, and even if the Congress had joined the mahagathbandhan, the loss would have been just eight seats. In 14 states, including Delhi, the BJP polled more than 50 per cent of the votes, and no amount of opposition unity would have defeated the BJP. But they could probably have reduced the total seat count to below 272, but not enough to stop the NDA from returning to power.

Then Sen bats for Kanhaiya Kumar, of JNU 'azadi' fame, who was trounced by Giriraj Singh of the BJP. Sen asks: “Should the Rashtriya Janata Dal in Bihar, which did make alliances, have gone a step further in not denying room for the youthful national leader, Kanhaiya Kumar, in Begusarai, without worrying about Kumar being a potential rival to the leadership of the 29-year-old RJD leader, Tejashwi Yadav?”

Sen seems to be lacking in math skills. In Begusarai, the “youthful national leader” trailed Giriraj Singh by nearly 4.2 lakh votes. Even if the RJD vote (1.96 lakh) had been added, and also that of every other minor contestant who lost his deposit, Kanhaiya Kumar would still have been defeated by a convincing margin of more than 1.57 lakh votes. Kumar just did not have a chance in Begusarai, despite his popularity with the anti-Modi media and the Left opposition.

The most ridiculous point Sen makes is that winning alone is not enough. Modi ought to have had the endorsement of the world media, too. Sen writes: “There has been widespread criticism in the news media across the world (from The New York Times, The Washington Post, The Wall Street Journal, The Guardian, The Observer, Le Monde, Die Zeit and Haaretz to the BBC and CNN) of the ways and means of securing BJP’s victory, including instigation of hatred and intolerance of groups of Indian citizens, particularly Muslims, who have every right to be treated with respect (as under the Gandhi-Tagore understanding). Winning cannot be the only concern in fighting an election. It makes a big difference how the winners are viewed in the post-election world. A well-wisher of the BJP would have had reasons to desire more than just a win for her favourite party.”

Quite apart from the fact that the opposition also used polarising speeches to get the minority vote, Sen does not consider the verdict to be credible unless the NYT or BBC certify it as kosher. If this does not betray a sepoy mentality, what does? The Western media has to agree that Modi is good and true before Indians should accept his as a valid victory.

Then Sen fanned the opposition allegations about how the Election Commission played favourites. He wrote: “India is, in many ways, a successful democracy, which — until recently — had an excellent reputation for treating different political parties with symmetry and equity. However, in the 2019 elections, there have been reasonably convincing allegations of unequal favours received by the ruling party. These concerns have been partly related to the assessment of some of the decisions taken by the Election Commission…”.

One wonders what these “reasonably convincing allegations” were, but the opposition complaints were primarily of two types: one involved demands for gagging Modi and Amit Shah for alleged violations of the Model Code of Conduct, and the other involved raising doubts about the EVMs.

But a VVPAT (voter verifiable paper audit trails) count after EVM counts showed absolutely no discrepancy at all. As for gagging Modi and Shah, surely Sen, as a believer in free speech even if sounds seditious, cannot be asking for the same during election time?

Sen obviously believes that India was the ultimate paradise ensuring absolutely fair treatment to all political parties until Modi arrived on the scene. The fact that the Election Commission conducted such a difficult polling exercise, and that too without curtailing free speech, does not apparently matter much to Sen. That the same commission, which allegedly favoured Modi and Shah, did nothing to gag Mamata Banerjee or Rahul Gandhi or other opposition leaders who used incendiary language also does not count as even-handed treatment for Sen.

Sen also blasted the NDA government’s “super-nationalist beliefs” and the invention of terms like Urban Naxal, when he had nothing to say about sustained abuse by the Lutyens elite of their right-wing rivals as fascist or “chaddiwalas”.

Sen is entitled to his ideological framework and strong dislike for Modi and what he stands for. But, surely, his hypocrisies and attempts to deny legitimacy to Modi’s victory suck. Truly suck.