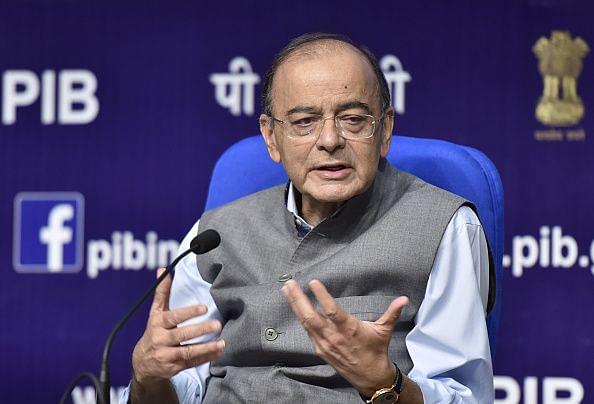 There are a few people in the world that are showered with favours from all of the Tridevis – Saraswati, Lakshmi and Durga. These people are high achievers in indices relating to intelligence, wealth and power.

Arun Jaitley would be a poster boy of such benevolence. Blessed with outstanding intellect and argumentative skills, he gained wealth and reached the top of two competitive professions--as a lawyer and as a politician.

What is even more extraordinary was that he put his considerable talents in the service of the country.

The first thing that will come to mind about Arun Jaitley is his articulation. He was the great explainer. His ability to get to the nub of the issue and explain it with a few simple words was almost magical.

The defence of the government on the Rafale issue when everyone else were tying themselves into knots or the half-hour demolition job of the Congress manifesto, its last arrow in the quiver, in the lead up to the last Lok Sabha elections, were done in his inimitable style.

Arun Jaitley knew almost everybody in Delhi. Politicians of all hues, lawyers, journalists, activists, businessmen, diplomats, bureaucrats, all of them, visited him. He relished at knowing everything that was happening in Delhi. He regaled people with gossip and stories.

Combined with intellectual prowess, networking ability and legal acumen, he was an institution in himself.

Political activists talk about the Modi-way or the Jaitley-way, referring to the Lok Sabha or the Rajya Sabha route, to describe the rise to the pinnacle of political power.

Not all Rajya Sabha members get to the very top and wield power through intellect and courage. Arun Jaitley was probably kind the leader for whom the upper house was created by the framers of the constitution.

In the post Atal-Advani era, if there was a Bharatiya Janata Party (BJP) leader that truly acted as a mentor to younger politicians, it was Jaitley.

Ministers Piyush Goyal, Dharmendra Pradhan, Nirmala Sitharaman, Anurag Thakur to name a few, were his prominent protégés. More importantly he was the guiding light for many young activists.

He was one of the few senior leaders who encouraged arguments. One could present a reply to him and he would patiently listen.

He gathered quite a few young activists in theirs 20s and 30s. He wanted to know how we thought about politics and how new technologies were shaping the world.

If he knew one was smart and had ideas, he would never deny an appointment. Even when his health deteriorated he would meet for a short while and share a few jokes. He always insisted on being patient and taking the long-term view in politics.

He was driven. In shaky political turns after the fall of the Janata Party government, he stood steadfast in his nationalistic convictions. He never quit the game.

Even when he was recuperating from illness, he would write blogs and tweet on affairs of the day that would go on to make headlines.

When people believed he was retiring, he only came back stronger. His managing of the media was masterly. But it was undeniable that he was a true believer in the freedom of the press.

His biggest governance achievement was the enacting of the Goods and Services Tax. In the back of the criticisms of him not being an economist to be heading the finance ministry, he lead complex, multi-party negotiations leading to biggest tax reform in the country since independence.

He followed it up with smooth conduct of the GST council meetings even when political overtones were overtly unfriendly.

Of his most significant political achievements was that of keeping the BJP together and building it up post the disastrous 2009 election results and the subsequent Shimla meeting of the party.

It is hard to fathom now that the BJP was staring at a questionable future just a decade ago. Sushma Swaraj in the Lok Sabha and Arun Jaitley in the Rajya Sabha brought the gravitas required of an opposition party in the UPA-2 period.

For this author, the many months leading up to the spectacular victory of 2014 elections provided the most memorable moments with Jaitley.

He was in-charge of the publicity and advertising committee. He sought ideas for his blog and was generous in praising good suggestions. The daily meetings with him were an education. He gave us in the leadership group a free hand to do innovative things enabling a creative and much appreciated campaign.

He gave critical inputs that we would have missed and moved to generate consensus in the tricky situation within the BJP. There were even days when he dropped us home.

Later, in the Finance Ministry, he sought new ideas that he felt the bureaucrats were not providing. Like most smart people, he had a great sense of humour and presence of mind that he used deftly to defuse tense situations.

His demise leaves a vacuum in the political spectrum. For the BJP, he is irreplaceable.

He was clever and believed in the art of the possible. One can say that was a born to do politics. His ability to work with ambiguities and uncertainties, across the aisle with people with opposing interests and not being too dogmatic made him an ideal politician.

Many obits will be written for him. He knew a lot of people and he meant different things to them. For young activists, he will be an icon of calmness, decency, probity and toughness. His life offers guidance on the high standards that activists have to elevate themselves to serve the country.