As Rajasthan Votes Today, Here Are The Key Data Points To Look Out For 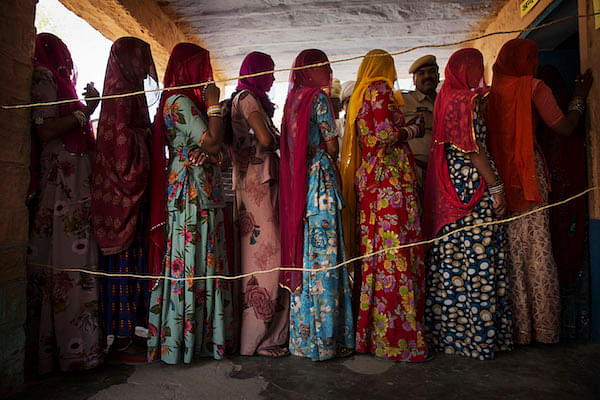 Rajasthan is voting today (7 December) along with Telangana. Let’s look at a few data points to help make sense of the electoral dynamics in the state.

Assembly elections in Rajasthan have always featured a tough contest between the Bharatiya Janata Party (BJP) and the Congress. In the state’s political past, people have always voted out the incumbent government since 1993. The BJP recorded its best performance in 2013, bagging 163 seats, while its worst performance came in 1998 when it could manage only 33 seats.

Similarly, the Congress party’s best performance came in 1998 when it won 153 seats. Its worst performance, on the other hand, came in the last election when it secured only 21 seats.

Bahujan Samaj Party (BSP) has failed to emerge as a potent third force in the state. The influence of others and independents is gradually declining in state politics.

The BJP, Congress, and BSP have gained vote share in the state at the expense of independents and regional parties. The vote share of the two parties has oscillated – the BJP has gained vote share when the Congress was the incumbent and vice versa. The BSP’s vote share has stayed in the range of 4-7 per cent.

Caste often plays an important role in Indian politics. People often find a connect with their community’s candidates, which usually affects their voting pattern. In Rajasthan, Scheduled Castes and Tribes account for 31 per cent, upper castes 19 per cent, Jats 12 per cent, and Other Backward Class (OBC) 18 per cent of the population. The minority community doesn’t have a significant representation in the state.

The OBC and upper-caste voters are traditional supporters of the BJP in Rajasthan. The SC, ST voters support the BJP and Congress alternatively. The BSP has some support among the SC community. The Congress maintains its lead among the Muslim community. Jats, traditional supporters of the Congress, have shifted their allegiance to the BJP over the years.

Rajasthan has 58 reserved seats – ST (25) and SC (33). The tally of both parties among the reserved seats changes in accordance with the results in the election. The BSP has just won one reserved seat all these years. These seats change hands every election, just like the state throws a different winner each election.

Victory margins indicate the level of toughness of the elections. Nine of the 230 seats (15 per cent) have witnessed a very close contest. The BJP has won more than half of these close contests. On 148 seats, the candidates won handsomely by over 10,000 votes, which indicates the one-sided nature of elections in 2013. The average margin of BJP candidates was higher than the overall margin of 14,151 votes.

Rajasthan is divided into six regions for electoral analysis purposes – north, west, central, Matsya, south, and Haroti, according to the Centre for the Study of Developing Societies. Of the 200 seats, the west has the highest share while Haroti accounts for the lowest.

The BJP recorded a higher vote share compared to the Congress across regions in 2013. If the Congress would have contested the polls together with the BSP, it would have been ahead of the BJP only in the Matsya region (-0.80 per cent).

In 2008, Congress was ahead, abiding by the alternating pattern, across most of the regions. The western and Matsya regions are strongholds of the BJP as the party was leading the Congress there even in 2008, when it lost. It posed a stiff challenge to the Congress even in the western region.

The ‘none of the above’ or NOTA option also plays a key role in electoral results. The southern region recorded the highest NOTA numbers while the north saw the lowest.

The BJP was ahead of the Congress in urban areas in both 2008 and 2013. In rural areas, while th Congress was ahead of the BJP in 2008, the BJP came out ahead in 2013 in line with the overall trend. Twenty-five seats are urban while 175 are rural.

In Rajasthan, the Modi factor is very strong. Where across India 27 per cent people supported Narendra Modi in 2014, in Rajasthan, the corresponding number was 42 per cent.

According to the poll of polls, the Congress is expected to get 122 seats while the BJP seems set for 68.

According to the India Today-PSE survey, cleanliness, agriculture, unemployment, drinking water, price rise, and the condition of roads are the main issues in Rajasthan state elections.

Rajasthan has 33 districts and six regions, detailed below:

16. SC-ST Population Greater Than 20 Per Cent

Seats with greater than 20 per cent SC-ST population follow the electoral trend.

A cracker of an election on the cards!