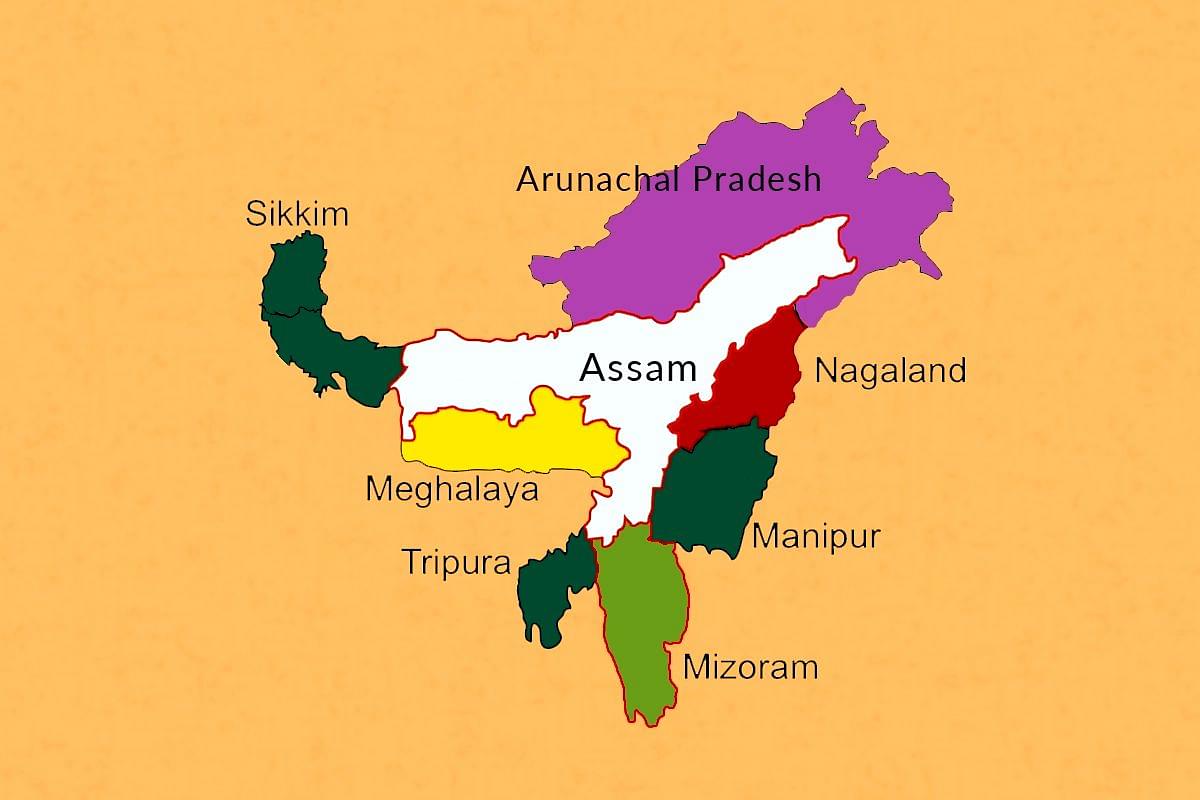 Mizoram and Assam have lodged police complaints against each other.

The territorial dispute between Assam and Mizoram that resulted in the killing of six Assam Police personnel earlier this week shows no sign of resolution despite the direct intervention of the Union Ministry of Home Affairs (MHA).

The embers of the dispute are still burning and can flare up any time. And what should be a greater cause for alarm is that fissiparous forces have started fishing in the troubled waters and stoking anti-Indian sentiments in Mizoram.

As has already been reported (read this), the sudden escalation of the long-standing border disputes between Assam and four neighbouring states appeared to have been part of a well-planned conspiracy against the new BJP-led government in Assam.

Mizoram and Assam have lodged police complaints against each other. Mizoram Police have filed an FIR against Assam Chief Minister Himanta Biswa Sarma and six senior officers of the state on charges of attempt to murder and assault.

The Assam Police, on the other hand, have issued summons to Mizoram Rajya Sabha member K. Vanlalvena and six senior officers of that state for fanning tensions under Section 41A of CrPC.

A four-member Assam Police team went to Delhi on Friday and looked for the MP at his residence but, on not finding him there, pasted a notice on the door of his house asking him to appear before the police in Cachar district (bordering Mizoram) ‘without fail’ by August 1.

Vanlalvena had said outside Parliament on Wednesday that more than 200 policemen from Assam had entered Mizoram’s territory on Monday, thus sparking retaliation by Mizoram Police. “They are lucky that we didn't kill them all. If they come again, we shall kill them all,” he had reportedly said.

A deputy superintendent of police in Assam’s Cachar district also issued summons to the deputy commissioner of Mizoram’s Kolasib district while three MLAs from Assam’s Barak Valley have decided to move court against the police chief of Kolasib district.

Assam issued an advisory on Wednesday to its citizens against traveling to Mizoram, and Assam home commissioner M.S.Manivannan issued an order on Friday stating all vehicles entering Assam from Mizoram will be “checked thoroughly” for drugs.

Assam chief minister had said on Tuesday that drugs from Myanmar enter Assam through Mizoram and Monday’s violence at the border could have been instigated by drug lords in Mizoram who have been hit hard by Assam’s ongoing crackdown on drug trafficking and traffickers.

Meanwhile, amidst all the police complaints and counter-complaints, accompanied by allegations, Mizoram on Friday refused to withdraw its armed police personnel from areas close to the disputed territory.

Mizoram chief minister Zoramthanga said that the state police will remain deployed in the areas close to the disputed territories (but within Mizoram’s territory) “till peace and tranquility is restored completely”.

The Union Home Secretary, who is holding talks with top officers of the two states in Delhi, wanted both the states to withdraw their police forces away from the inter-state border so that central armed police forces (CAPF) could be deployed there as a ‘neutral force’ to maintain peace.

While Assam has agreed to pull back its police force, Mizoram has contended that it is the Assam Police who came into border town of Vairengte (it lies on the Mizoram side of the border) and overran a Mizoram Police post there on Monday.

“So till we are fully satisfied that there will not be a repetition of such incidents, our police will remain deployed at that border,” a senior home department officer told Swarajya from Mizoram capital Aizawl.

Mizoram has pointed out that Assam has announced it will raise five new police commando battalions and deploy three of them along the border with Mizoram. The Mizoram chief secretary told the Union Home Secretary that Assam Police has already deployed heavily-armed police and stationed bullet-proof vehicles close to the Mizoram border.

“Given the state of offensive readiness that Assam has kept its forces in, we apprehend that Assam Police may once again try to enter and occupy our territory. On Monday, Assam Police led by its IG Anurag Aggarwal and DIG Devojyoti Mukherjee simply brushed aside CRPF personnel posted at the border. Thus, we have our reservations about the efficacy of the CRPF to act as a neutral force and deter any misadventure by the Assam Police. Till our fears and apprehensions are not addressed adequately, our state police will remain where they are,” said the senior home department officer.

Thus, the situation remains highly volatile along the Assam-Mizoram border and even a simple misunderstanding can, once again, lead to bloodshed.

Taking advantage of the situation, some organisations in both the states are encouraging an anti-Indian sentiments. These organisations were active in the two states during the anti-CAA agitation in 2019.

In January-February 2019, protests against the Citizenship Amendment Bill (it became an Act after it was passed by Parliament in December that year) gained momentum. And anti-Indian posters proclaiming ‘Welcome Independent Republic Of Mizoram’, ‘Hello, New Christian State’ and ‘Hello China, Bye Bye India’ (read this) were displayed at these agitations.

Former Mizoram chief minister (he belongs to the Congress) Lalthanhawla also held up such a poster (read this) at one such protest rally against the CAB.

It was later revealed that a few NGOs and even Christian missionary groups were behind those protests and had egged on the protestors to display those anti-Indian posters.

These same groups are at work now to ignite anti-Indian sentiments among the Mizos. A social media campaign has been launched in Mizoram blaming the new BJP government in Assam for escalating the border row.

The vicious implication is that the BJP is anti-Christian and so the new government in Assam is using strong-arm tactics and indulging in violence against the Christian-majority states.

Many in Mizoram are saying that the BJP government at the centre is favouring Assam and that’s why it has not asked Assam to take back its heavily-armed forces from the border.

Many Mizos are also accusing Assam of imposing an unofficial blockade on National Highway 306 (it is Mizoram’s lifeline) to “punish the Christians of Mizoram”.

In Assam, too, some are blaming Himanta Biswa Sarma for being belligerent and acting at the behest of the ‘majoritarian government’ at the Centre. Sarma, they say, is behaving like a ‘Hindutva agent of the BJP government in Delhi’ and acting against Christian-majority states.

As past experience shows, anti-BJP sentiments can quickly metamorphose into anti-India sentiments because, to many in the region, BJP is equated with Hindutva and, by extension, Hindu-majority India.

What everyone conveniently forgets, or ignores, is that the border disputes between Assam and its four neighbours is a legacy of the Congress which has ruled the region for the most part of the last 74 years.

The Congress did nothing to resolve these border disputes all these decades. It was when the Congress was in power that the tribal states were carved out of Assam. It should have been the responsibility of the Congress to ensure that the inter-state borders were demarcated on the ground.

The Congress allowed the border disputes to fester. Even when Congress governments were in power in Assam and the neighbouring states with which Assam had border disputes, that party, especially its central leadership, did nothing to get its state governments to sit across the table and resolve the disputes.

But that is an issue that has to be kept aside now; blaming the Congress for its failure can be no excuse for not resolving the disputes now and will not achieve anything either.

The Union Government has to get Assam and its neighbours to the negotiating table and broker not only peace, but a final resolution of the long-festering territorial disputes.

Not doing so immediately can lead to more ugly incidents along the inter-state borders, thus causing major upheavals in the sensitive and strategic region.

And allowing the disputes to fester would also give greater opportunity to vested interests and anti-Indian forces to whip up fissiparous sentiments in the region.