Attention, Patidars! Congress Can’t Give You Reservation Even If It Wins Gujarat 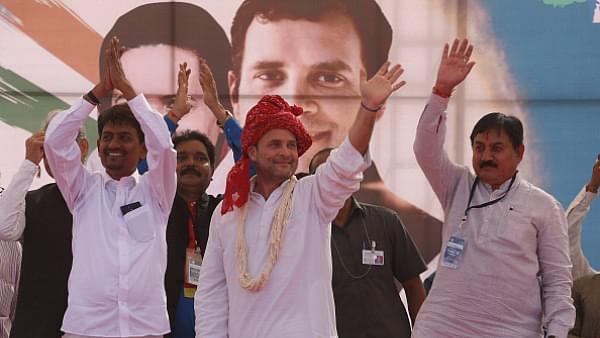 The Indian National Congress (INC) is pulling out all the stops to put an end to the Bharatiya Janata Party’s (BJP) 22-year winning streak in Gujarat. It has its reasons to believe that it can pull off this seemingly impossible task. The saffron party is not in the best books of the influential Patidar community over its failure to meet their demand for reservation in jobs and education. There is certainly an anti-incumbency feeling as well, for the party has enjoyed power for over two decades now. And to top it all, it’s not going to the polls with as charismatic a figure as Narendra Modi as its leader.

Whether these issues have an impact on the final tally, we will know only on 18 December, when the votes are counted.

Electoral clime is ideal for opening old wounds. And more often than not, they tend to hurt the incumbent party for obvious reasons. The Patidar quota issue, which had died down over the past year, is back into the picture. It’s the perfect time for the likes of Hardik Patel to enhance their self worth in the eyes of opportune politics by becoming contractors of Patel votes. No wonder, he is back in action.

Patel has given an ultimatum to the Congress party – By 3 November, give an assurance of quota to Patidars if you come to power in Gujarat, or else be ready for consequences. If the Congress accepts, he will support the party in the upcoming assembly elections.

While India’s Grand Old Party is still weighing the pros and cons of making such a promise, its Gujarat unit spokesperson said that his party will give 20 per cent quota to Patidars and other economically backward sections and would introduce a bill if it wins the Gujarat elections.

Both Patel’s demands and the promise of Congress spokesman either betray their ignorance of the proposed National Commission for Socially and Educationally Backward Classes (NCSEBC). The legislation is currently pending before the Parliament and will be taken up in the next session.

When NCSEBC is passed by both Houses of the Parliament, state governments will have no say in deciding who gets reservation either at the centre or the state.

Clause 4 of the bill will add a new Article, 342A, after Article 342 of the Constitution, and will have two sub-clauses:

(1) The president may with respect to any state or Union territory, and where it is a state, after consultation with the governor thereof, by public notification, specify the socially and educationally backward classes, which shall for the purposes of this Constitution, be deemed to be socially and educationally backward classes in relation to that state or Union territory, as the case may be.

As is clear from the draft legislation, the President alone can recommend a caste to be socially and educationally backward in a state’s list or a union territory’s list via a simple public notification. Though the President is supposed to consult the Governor, his advice is not binding.

The Parliament will decide whether to include a caste in the central OBC list. This means that the responsibility in such matters will be of all parties and not just of the ruling party alone.

The Congress and Patel are pretending to be oblivious to this upcoming law and it is highly likely that it will pass in both Houses even before the new Gujarat chief minister takes oath. Both are trying to pull the wool over the Patidar community’s eyes.

In its manifesto, Congress is likely to announce 20 per cent quota to Economically Backward Classes (EBCs). However, this is also no solution to the problem. The BJP already tried this route. It passed a bill giving 10 per cent reservation to EBCs, but the court struck it down.

Additionally, Patidars constitute less than 15 per cent of the total population of the state, while OBCs are 40 per cent. If Congress promises too much to Patels, it risks losing the support of the backward communities. It has no way out other than to make false promises.

The BJP, on the other hand, has found a perfect way to defuse the quota mutinees. By proposing sub-categorisation of OBC, it stands to make everyone happy. The main opposition to the inclusion of supposedly influential castes such as Patels, Jats and Marathas in the OBC list comes from those who are already enjoying the fruits of reservation. They fear that if these castes are added, they will corner all the benefits for them. But if sub-categorisation is done, then strong and weak castes can be divided and given exclusive pies to eat. Those castes which feel that under the current system only a handful of castes are taking away all the benefits, will support the BJP while the ones who will lose out in the new regime will be more than compensated by an addition of votes from caste groups like the Marathas, Jats and Patels.

But all this is still many months away. For the time being, Patidars should know that Congress can’t deliver no matter how many big promises it makes regarding reservation. Even if it wins Gujarat, it will need the President’s (and hence Modi-Shah’s) nod to include Patels in the state OBC list. By the time the state election is over, the ball will most likely be in the centre’s court and will remain there for the foreseeable future.