Beef And Akhlaq: The Hindu Fringe Is Completely Wrong On This One 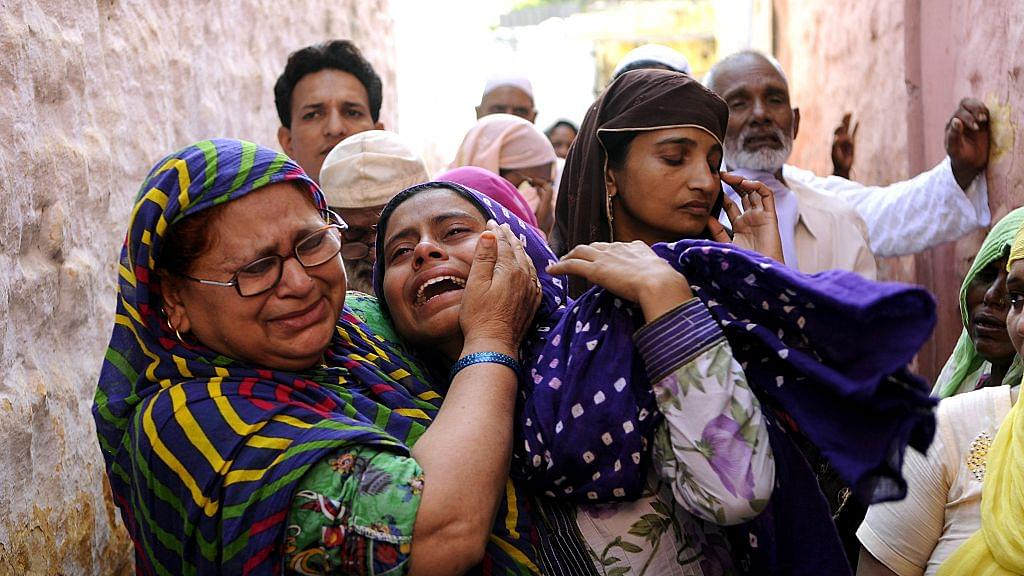 In this photograph taken on September 29, 2015, relatives mourn slain Indian villager Mohammad Akhlaq in the village of Bisada, some 35 kilometres (22 miles) north-east of New Delhi, after his death at the hands of a mob in the northern state of Uttar Pradesh. Indian police said September 30, 2015, that they had arrested six people after a 50-year-old Muslim man was beaten to death over rumours he had eaten beef, a taboo in the Hindu-majority nation. Mohammad Akhlaq was dragged from his house on the outskirts of the Indian capital New Delhi and attacked by around 100 people late September 28, a police officer told AFP. (Photo credit: STRDEL/AFP/Getty Images)

The reported conclusion of a forensic laboratory that what Mohammed Akhlaq had stored in his house may have been beef makes no difference to the criminality of the anti-beef fanatics who killed him in Dadri. Murder is murder, and vigilante justice against some deemed to have violated the anti-cow slaughter law cannot claim any vindication from the lab’s finding.

In fact, one wonders why the police even thought it necessary to link the meat stored in Akhlaq’s home to a revered animal. The lab test would have been okay if the murderers had reported violation of the anti-cow slaughter law in Uttar Pradesh to the police. After the murder, it was about rubbing salt in the wounds of the dead victim by claiming he stored the wrong meat. If the Modi government wants to retain its credibility, it needs to openly say so to rein in the fringe.

Anti-beef activists need to be told one simple thing: a religious belief against cow slaughter is fine and can be justified - even promoted - as a social cause. But at the end of the day, what you eat is a personal decision, and society and state have no business telling anyone one what to do. In fact, there is a stronger case for abolishing anti-cow slaughter laws than for retaining it. The messy mean India has found so far on the beef issue is to legislate laws banning cow slaughter and then not implement them. This is supposed to satisfy both groups. It has done neither.

The fundamental issue is this: should you legislate dietary habits? The answer is yes, provided there are good reasons to believe the consumption of some product is harmful, or that it is damaging for society as a whole, or that the mere act of consuming something is morally repugnant to the human conscience.

It is possible to argue, as the vegan/vegetarian lobby does, that killing animals for food is wrong in principle, and rearing animals in captivity just for slaughter is morally and ethically unjustifiable. To this can be added layers of recent arguments on how excessive consumption of animal protein is causing global warming, that land that could have been used for growing plant foods is now being sacrificed for growing animal feed, and that excess animal protein may stimulate obesity and result in health issues even for humans.

This is a good bundle of arguments, but we are essentially making out a case for promoting good food habits and sensitising the public about unethical treatment of animals. We can also bat for laws that ensure humane treatment of animals reared for ultimate slaughter and human food. But there is no case - as yet - for a complete ban. Especially a ban on killing one particular animal.

Hindus have every right to campaign against beef-eating, but citizens have a right not to listen. Just as the state promotes awareness against tobacco use and cancer risks, those who think beef-eating is bad can find the evidence for their beliefs and tomtom it. But they can’t enter my home and tell me what to eat. At some point, if beef is genuinely found to be dangerous to human health, it can even be proscribed, but that evidence is not convincing.

On the other hand, we cannot also discard evidence that some amount of animal protein may be useful for those among the poor who need it for combating malnutrition and stunting of growth. There is some evidence that animal proteins were essential for brain growth at an early stage in human evolution. So a reasonable case can be made out for the consumption of a small amount of non-vegetarian foods, especially fish and non-red meat, by those who are willing to consume it.

I find the middle path best for determining the public stance on cow slaughter or vegetarianism. The world would benefit from using animal protein in limited quantities, but excess consumption and extreme non-vegetarianism is bad for both the individuals and the society.

But murder in pursuit of such a cause is simply murder. The anti-beef lobby is completely wrong on this one. The meat found in Akhlaq’s home cannot be a matter for public outrage, leave alone violence and murder.