Behind Ankit Saxena Murder, A Familiar Foe In Religious Bigotry? 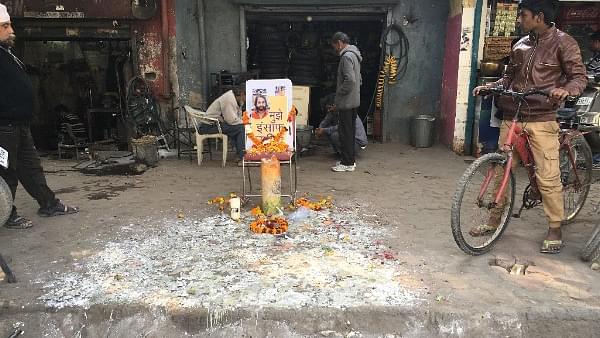 More than a week has passed since the barbaric killing of a young man in Delhi by the family of the girl he was allegedly in a relationship with.

Ankit Saxena, 23, was slit in the throat by the father of the girl at Raghubir Nagar market junction around 8.30pm on Thursday (1 February). The accused, including the girl’s mother, maternal uncle and minor brother, have been arrested. The family has reportedly confessed to the crime and are showing no signs of remorse.

The gruesome act has been condemned by political leaders, activists and celebrities alike. Several editorials pinned the blame for the murder on the regressing society that doesn't allow love to blossom and exhibits little tolerance for interfaith couples (Saxena was a Hindu, and the woman, a Muslim).

One such editorial said, “In a society that makes much of lurking in the bushes to catch lovers kissing, Saxena's death is certainly not the last.” The “lurking in the bushes” is an obvious reference to right-wing groups that routinely admonish suspected interfaith couples.

Other editorials have blamed Indians' obsession with arranged marriages for the shocking 'honour killing'. It suggests that the incident is only the latest in a long roster of cases reported across India where families have killed their own and the lovers for committing the crime of falling in love, especially when they fail to honour the caste and religious obligations set by them.

Both these observations about a large section of Indian society are, of course, true. Yet, these explanations for the murder of Saxena are mere conjectures.

For a distant observer who has no information about the family of Akbar Ali other than that gathered from media reports, there is no way to imagine what triggered them to take the extreme step.

After all, the same society that some commentators have accused of killing love has evidently allowed love to blossom. Ali’s colony in West Delhi’s Raghubir Nagar itself is home to several interfaith couples. These couples are alive, happy and raising families. Just two floors below Ali’s house, in the same building, lives a Hindu Punjabi family where the eldest son has married a Muslim woman.

Some of these families have personally known the accused and have things to say about them. Their accounts offer some plausible explanations for their crime that go beyond the lazy reasoning of degradation of society as a whole.

Barely a hundred metres away in the narrow lane from the house of Ali lives a couple where the woman, Sarah (name changed), is a Muslim while the man is a Hindu. They married in 2009.

Sarah has known Ali’s wife for two decades and calls her ‘baji’ (an Urdu word for ‘elder sister’). But the two had a falling out after baji’s taunts on her marriage became too much to bear.

“Baji told me a lot of times that I will burn in “dozakh ki aag” (hellfire) for committing the grave sin of marrying a Hindu and not converting him,” Sarah says.

“She was dead against such a union.”

“She would also pull me up for attending kirtans and jagrans in the colony. If she saw me, she would catch me the next day and chide me for betraying my religion and indulging in kufr activities. She herself was a very religious woman who would keep goading me to reach Hadith.”

“The last time she pulled me up for sitting in a jagran was six months ago. Ironically, it was Ankit who covered that event [as a photographer].”

Sarah says she wanted to tell the woman a lot of things in response, but could never summon the courage. “Baji was in a profession that is considered un-Islamic. Plucking facial hair is haram. She was a hypocrite that way.”

Sarah recalls her baji getting offended at the sight of Sarah’s children playing with colours on Holi or bursting crackers on Diwali. “Though we lead a ‘Muslim lifestyle’ at home as my husband has deep interest in Islam, we celebrate all festivals. This was fine with everyone in the colony, including other Muslims, except her.”

Sarah says she always felt that the girl (Saxena’s girlfriend) wanted to tell her things and wanted to be pally with her. “Her mother never allowed her to spend time with me as she considered me a bad influence.”

Sarah says her baji wasn’t against love marriages as such. “She herself had one. That’s what she told us often,” Sarah claims. She adds that, tired of the offensive, she had pointedly told her baji a few months ago that she was happy with her decision and prepared to face the consequences.

A few metres away lives another interfaith couple – a Muslim man and a Hindu woman. The man shared that the girl’s mother would often rebuke him for not converting his wife to Islam yet.

Across the road lives the girl’s cousin – her mausi’s daughter – who married a Hindu man. The husband, who works as a mechanic, said he was not allowed or wanted in Ali’s house. The reason, he says, is because the match was never approved of.

These accounts provide a background to the key role played by the girl’s mother in the killing. Investigation into the case has revealed that she had a much greater role than previously believed. She has reportedly confessed that it was she who went home after the initial scuffle with Saxena’s family to pick up the butcher’s knife. She had carried it with her on her Scooty and eventually rammed her vehicle into Saxena’s car to feign road rage and get him out of his car. Minutes later, her husband had run the knife on his throat.

The neighbours, who are still coming to terms with the brutal killing next door, are busy knitting bits of information to shape an explanation for the move. Most fingers point at the girl’s mother as being the mastermind for the signs of religious bigotry she often displayed.

Dia Mirza, a homemaker who lives in a lane adjoining the parlour and was a regular customer there, describes the girl’s mother as being a “kattar” (staunch) Muslim, evident from her aggressive stands on religious and political matters. Mirza herself doesn’t approve of interfaith unions, as most families in the area, but strongly condemns the hate crime.

“Whatever the family did was extremely wrong. If she had decided that killing was the only solution, she should have killed her own daughter. Why rob another mother of her only child? Why ruin someone else’s family?”

Ankit Saxena Killing: Residents Shocked That Their Neighbour Hated A Man Enough To Kill Him