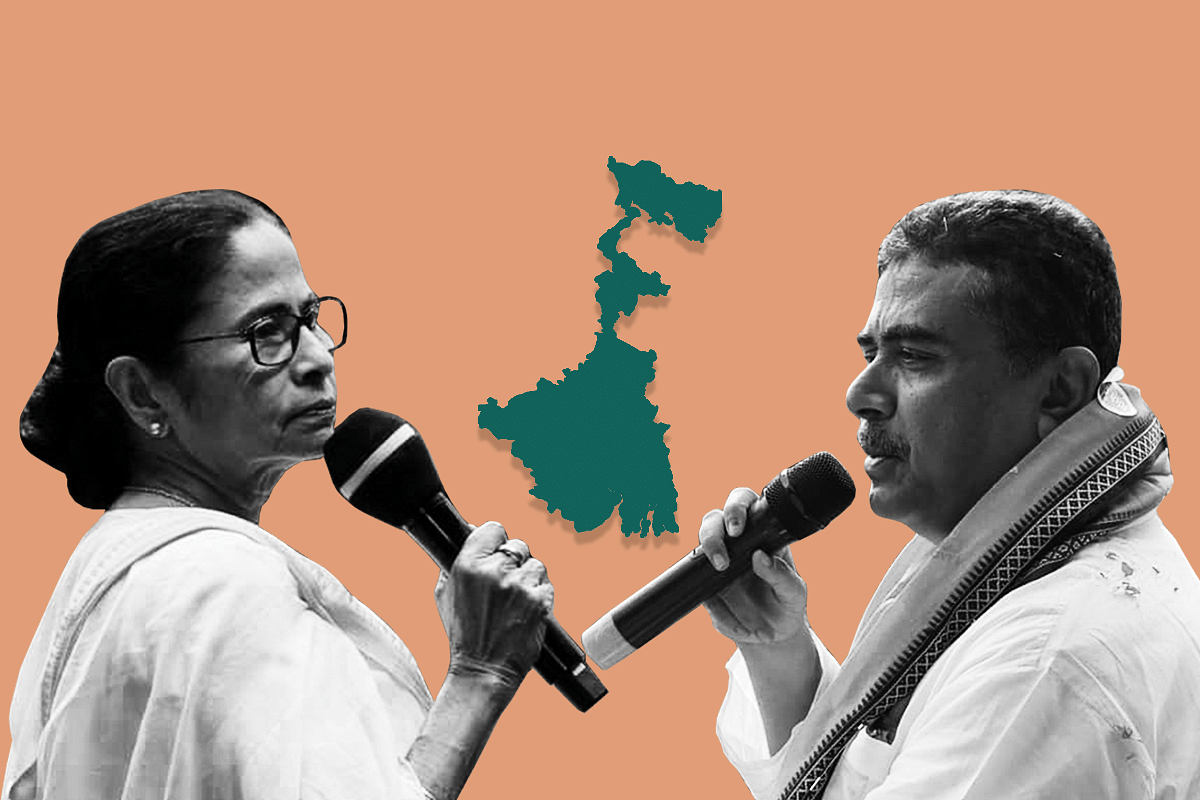 The BJP central leadership has, after the passage of a week, finally signalled its intent of standing up to and fighting the Trinamool by facilitating the election of Nandigram MLA Suvendu Adhikari as the head of its legislature party.

Adhikari, thus, becomes the leader of opposition and has pipped other contenders, including BJP national vice-president Mukul Roy, to that post.

Adhikari will, by virtue of his position as head of the BJP legislature party and Leader of Opposition, emerge as the face of the BJP in Bengal.

His election to the post was green-lighted by the party central leadership, which deputed Union minister Ravi Shankar Prasad and national general secretary Bhupendra Yadav to attend Monday’s meeting of the party’s 77 legislators.

Adhiakri’s name for election as head of the BJP legislature party was proposed by Dilip Ghosh and seconded by a host of MLAs.

Suvendu Adhikari’s election as head of the BJP inside the Assembly is significant because he is perceived to be one of the very few party leaders who has the courage and wherewithal to stand up to the Trinamool’s intimidation and attacks, and lead a fightback as well.

This was amply evident over the past one week which saw Adhiakri standing beside his party workers in Nandigram and resisting Trinamool attacks on them.

Unlike almost all other BJP leaders, Adhikari did not abandon the party workers and supporters in his constituency and also neighbouring areas in their hour of crisis.

Adhikari was seen moving around his constituency since Sunday (May 2) evening once the attacks on BJP cadres and supporters started instilling confidence in them and infusing them with courage, confidence and the means to not only resist Trinamool’s goons, but also to fight back against them.

Thus, despite a fierce onslaught on BJP cadres by murderous Trinamool goons who were angry at the humiliation faced by their leader Mamata Banerjee in Nandigram, Adhikari ensured that they (the Trinamool goons) could not inflict much damage.

This he did when most other BJP leaders, including senior state leaders and the ‘minders’ for Bengal, retreated to the safety of their houses and were content with only issuing statements condemning the violence unleashed by Trinamool goons on BJP cadres.

Unlike this trio, especially Adhiakri, other BJP leaders and MLAs have not faced political violence upfront and personally. And, thus, they are ill-equipped to resist and fight off the attacks that the Trinamool will mount very relentlessly on BJP cadres and supporters in future.

Also, having defeated Mamata Banerjee in Nandigram, Adhikari had emerged as the pre-eminent BJP MLA. That itself cemented his claim to the post of leader of the BJP legislature party.

Adhiakri is also very combative and, having been a close lieutenant of Mamata Banerjee, knows her well. He knows her weaknesses and vulnerabilities and can play on them to emerge as a strong and effective Leader of Opposition in the floor of the House.

The Nandigram strongman is also politically astute and well-versed in realpolitik unlike most other BJP leaders in Bengal who are mostly novices and have little experience as legislators.

Having led the fierce Nandigram agitation and having fought back murderous CPI(M) cadres during that agitation, Suvendu Adhikari is also well experienced in the game of politics in Bengal.

Suvendu Adhikari’s election as head of the BJP legislature party thus sends out a clear message that the BJP is prepared to face and fight off the Trinamool’s intimidation and attacks.

His election will, no doubt, also enthuse embattled BJP cadres and instill in them the much-required confidence to stand up to and resist attacks by the Trinamool.

That confidence had evaporated when the state, and central, leadership of the party retreated after the unexpected drubbing in the polls and left the party cadres to fend for themselves.

A huge number of BJP workers would have left the party or dissociated themselves from it since the party leadership had failed to stand by them.

Adhikari’s election will send a strong message to them that the BJP is with them. Adhikari, as the leader of opposition, is sure to raise the issue of attacks on BJP cadres on the floor of the House very strongly.

Having taken the wise decision to make Suvendu Adhikari the head of the BJP legislature party, the party central leadership should now allow him a free hand to decide on the strategy to be adopted by the party on the floor of the Assembly.

The BJP state leadership should also be asked to allow Adhikari to function independently. Better still, the state leadership, which had failed so spectacularly to lead the party to an expected victory, must be asked to step aside and make way for Adhikari, Nisith Pramanik, Arjun Singh and other courageous leaders to take over the reins of the party in the state.

What the BJP in Bengal needs in this hour of crisis is strong leaders who have the guts to take on the Trinamool.

Mamata Banerjee will be unrelenting in unleashing her cadres on the BJP and using the state machinery to intimidate BJP cadres and silence them.

Only Suvendu Adhikari and a handful of other BJP leaders will not wilt and surrender to that onslaught.

Hence, having taken the right decision to back him to lead the party inside the Assembly, the BJP central leadership should also display the sagacity to entrust him with the responsibility of leading it outside as well.