Bengal: Contrary To Speculations Fuelled By Trinamool, Dilip Ghosh Most Likely To Lead BJP To 2021 Polls In State 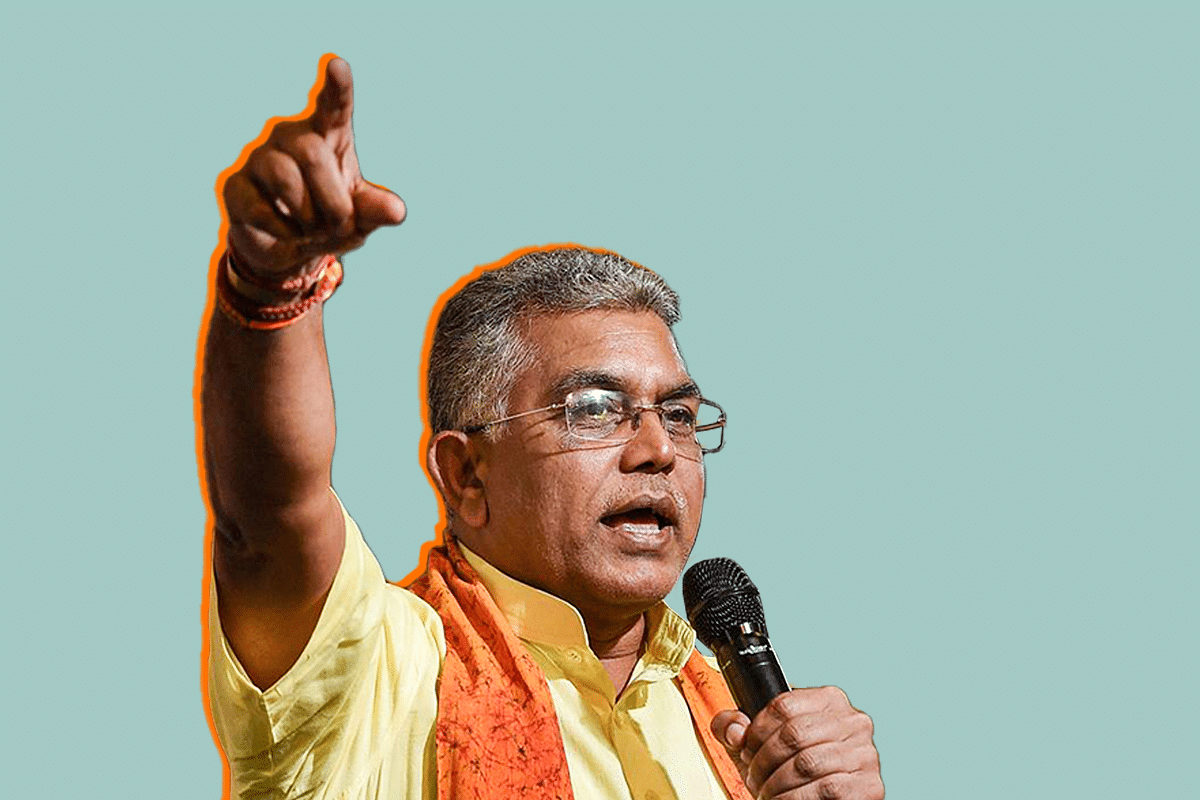 There has been a lot of speculation in recent weeks on who will lead the BJP in Bengal to the crucial Assembly polls next year.

A lot of that speculation was, it now transpires, fuelled by the Trinamool and its hired political strategist Prashant Kishore.

But contrary to all the conjectures about a change in the BJP state leadership and the party nominating someone other than state party chief Dilip Ghosh as the chief ministerial candidate, it is learnt that Ghosh is most likely to lead the party to the polls.

The BJP central leadership has been holding a series of confabulations with state party leaders in Delhi and Kolkata. And the firm message that has reportedly been conveyed is that the party must fight the polls unitedly.

The trigger for the intense speculation was the low profile maintained by party strategist Mukul Roy since the outbreak of the pandemic.

Roy’s absence from public eye and many programmes, including virtual ones, organised by the party over the past few months was misread as an indication that all was not well within the saffron party’s state unit.

Rumours about Roy’s return to the Trinamool, of which he is a founding member, flew thick and fast.

There were reports in the media that he was unhappy over being sidelined by Ghosh.

But all those reports were, it turns out, baseless.

Roy, a diabetic, had been avoiding public gatherings and party programmes out of precaution since he falls in the ‘high-risk’ group that is very vulnerable to the virulent Covid-19 virus.

“Mukulda has been very cautious and that’s why he has largely confined himself to his house. There is absolutely no truth to rumours that he is upset over being sidelined,” said a senior leader of the party.

He pointed out that many leaders from the Trinamool who had been inducted into the BJP by Mukul Roy had been given important organisational posts and responsibilities recently by Dilip Ghosh.

“Many people with key organisational responsibilities are close to Mukulda. He will have a major role to play in the election campaign. He is a key strategist,” said the BJP leader.

BJP national general secretary Kailash Vijayvargiya and the party’s co-minder for Bengal Arvind Menon visited Roy at his residence last week and initiated the brainstorming sessions for the forthcoming polls.

Vijayvargiya, who has been meeting a number of other state leaders in Kolkata individually and collectively, is learnt to have told them that Roy will be a critical cog in the BJP’s election machinery.

Roy is largely credited with the BJP’s good performance in the 2019 Lok Sabha polls when it won 18 seats in Bengal.

The unnecessary speculation and rumours of a rift in the party’s state leadership and of Roy and Ghosh having a fallout is the handiwork of the Trinamool and Prashant Kishore (PK).

“All those media reports that set off a buzz were planted by Trinamool and PK. But there is no basis to those reports,” said BJP national secretary Rahul Sinha.

PK’s objective, added Sinha, was to spread confusion in the BJP’s ranks and try to create a divide where none exists.

“But this strategy didn’t work because unlike the Trinamool or the Congress, the BJP is a disciplined and cadre-based party,” said Sinha.

State and national-level party leaders told Swarajya that Ghosh will remain the state party president and will lead the party to the polls.

“The BJP will fight the polls on the basis of its ideology and programmes and not on the basis of a personality. We do not think projecting anyone as the chief minister is necessary or important,” said a senior functionary in the party’s organisational setup.

BJP leaders say that PK tried to set a false narrative: that Ghosh is abrasive and has alienated many party colleagues, including Mukul Roy. Hence, to forge unity, Ghosh will be replaced and an ‘acceptable’ face brought in.

Various media reports also touted a number of names who, the reports claimed, were being considered as the BJP’s CM candidate.

Among them were a Rajya Sabha MP and even two monks, one belonging to the Ramakrishna Mission and another of the Bharat Sevashram Sangha!

The appointment of Satya Pal Malik as the Governor of Meghalaya to succeed Tathagata Roy also sparked speculation, especially in the media, about Roy being a likely CM candidate.

Roy has been wanting to return to active politics after his gubernatorial tenure got over in May this year.

He tweeted his intention to rejoin the BJP last weekend, and that set off more speculation in the media.

Roy, said media reports (like this one), would be an acceptable face for the Bengali intellectual and bhadralok since he was an academically and professionally accomplished person.

Interestingly, Roy tweeted on Sunday: “Desperate attempts afoot by PK team to foment internal trouble in West Bengal BJP by trying to set up one leader against another. But we were not born yesterday”.

Given all this speculation and mischievous reports in the media at the behest of PK and Trinamool, and the resultant confusion it may cause in a section of BJP activists and supporters, the party’s central leadership has sent a strong message to all its functionaries: Dilip Ghosh will lead the party to the Assembly polls in Bengal in 2021.

It has been made very clear to everyone that all will have to work unitedly under the leadership of Ghosh. There should be no doubt or confusion on this score, the central leadership has conveyed.

The BJP, said Rahul Sinha, is focussing on consolidating its support base and strengthening its election machinery.

A number of hard-hitting campaigns are being lined up and will be launched very soon, he added.

A BJP functionary who is close to Mukul Roy said that far from creating confusion and divisions in the party’s ranks, the mischievous campaign launched by PK and Trinamool against Dilip Ghosh has resulted in everyone rallying behind the Bengal BJP chief.

The speculations set off or inspired by the Trinamool, thus, seem to have had the opposite effect.