Bengal’s Battle Royale Over Kolkata Will Be A Close One 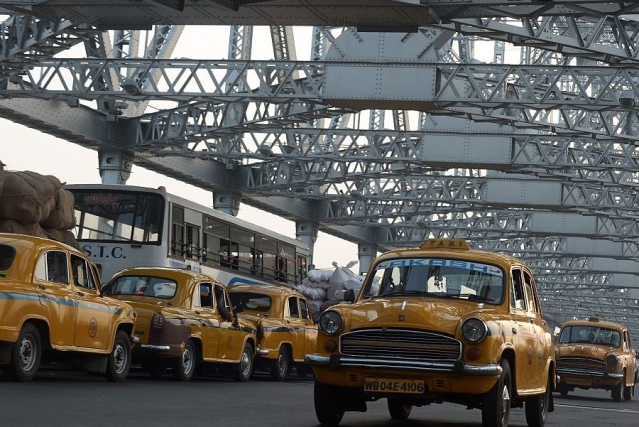 The bruising electoral battle stretching over six weeks for Bengal’s 42 Lok Sabha seats is finally coming to an end today (Sunday) with polling in the seventh and ultimate phase being held in nine constituencies in the southern part of Bengal. Of them, perhaps the most prestigious are the ones for the two constituencies of Kolkata North and Kolkata South which have been Trinamool strongholds.

Kolkata South Lok Sabha seat has been a Trinamool bastion for long. Party supremo Mamata Banerjee had won the seat for six successive terms from 1991. She gave up the seat only after becoming the chief minister in 2011 and nominated her confidante, who won the seat for the party in the byelections held in 2011 and then the general elections in 2014. An ailing Subrata Bakshi has been replaced by Mala Roy, who has been a councillor of the Kolkata Municipal Corporation for many years now.

Posing a tough challenge to her is Chandra Kumar Bose, grand-nephew of Netaji Subhas Chandra Bose, who has been fielded by the BJP from this prominent seat. The CPM has fielded well-known academic Nandini Chatterjee, while a lesser-known Mita Chakraborty is contesting on the Congress ticket. But the main battle is between Bose and Roy. In 2014, Trinamool’s Bakshi defeated the BJP’s Tathagata Roy (who is now the Governor of Meghalaya) by more than 1.36 lakh votes. And given that this has been a Trinamool bastion that houses Mamata Banerjee’s own residence, the battle should have been easy for Roy. But the electoral battle is anything but easy this time.

The Kolkata North Lok Sabha seat was created by the Delimitation Commission in 2009 by merging the Kolkata North-West and Kolkata North-East Lok Sabha seats. Both the seats had been Congress bastions before the electorate shifted their allegiance to the Trinamool Congress in 1998. Interestingly, the CPM bagged both the seats in 2004. But Trinamool veteran Sudip Bandopadhyay wrested the newly-created Kolkata North seat in 2009 and retained it in 2014. Bandopadhyay’s main rival in 2009 was the CPM’s Mohammed Salim, who he defeated by nearly 1.1 lakh votes. The BJP finished a poor third, bagging just 4.22 per cent of votes.

But five years later, the BJP emerged as the principal challenger to Bandopadhyay and the saffron party’s Rahul Sinha lost to Bandopadhyay by about 96,000 votes. The BJP’s vote share had then increased to 25.88 per cent, an impressive 21.66 per cent rise. Sinha, who has been the state BJP president, had mounted a spirited challenge to Bandopadhyay this time in Kolkata North, which has a large percentage of Hindi-speaking Marwaris, Biharis and UP-origin residents, as well as about 30 per cent Urdu-speaking Muslims.

Non-Bengalis form a little over 50 per cent of the population of Kolkata (including North and South). Of them, Urdu-speaking Muslims constitute about 42 per cent while the rest are Hindi-speaking Hindus. This unique demography is what both the BJP and the Trinamool Congress are trying to manipulate to their own electoral advantage. The Trinamool does not have much to worry over the Urdu-speaking Muslim vote; appeals have gone out to all Muslims by the clergy to vote for the Trinamool. It is the Hindu vote that both parties want to get a major share of. The Trinamool has been trying to divide the Hindu vote, while the BJP had tried to polarise it in its favour.

While 23 May will reveal who has been successful, it remains a fact that non-Bengali Hindus have largely and overtly rallied behind the BJP. This is evident from the huge response to the BJP’s rallies and roadshows, and the participation in Ram Navami processions last month. The BJP has been successful in mobilising Hindus in Kolkata, as in the rest of the state, and ‘Joi Shree Ram’ slogans have become quite commonplace in Kolkata. Whether or not that translates into votes remains to be seen.

The Trinamool’s principal cause for worry in Kolkata is the non-Bengali Hindu voter. Most of them are concentrated in the Chowringhee, Jorasanko, Beleghata and Kashipur-Belgachia Assembly segments of Kolkata North Lok Sabha seat, and in the Bhawanipore, Rashbehari and Ballygunge Assembly segments of Kolkata South Lok Sabha seat. This section of the electorate has turned decidedly pro-BJP over the last couple of years and despite the Trinamool’s desperate outreach to the Marwari, Bihari and other communities, they are most likely to vote for the BJP in large numbers.

The middle and upper middle-class Bengali Hindu voters spread over all the segments of the two Kolkata seats are also of considerable concern for the Trinamool. A large section of this electorate has turned against the Trinamool for its failings on various fronts. Though many among them are hesitant to support BJP, they have no other party to turn to. The Congress and the CPM in Bengal are spent forces and hardly worth wasting votes on. Thus, many of them are likely to vote for the BJP not necessarily because they support the saffron party, but as a vote of no-confidence against the Trinamool. This section is fed up with Trinamool’s hooliganism, high-handedness and hubris.

The BJP has been able to make inroads into this section of the electorate as well and many are now strong supporters of the party. The BJP’s silent and well-planned outreach to the middle and upper-middle class citizenry who have become disgusted with Trinamool misrule has been successful and is expected to translate into votes for the BJP. “The Bangali bhadralok has become an ardent supporter of the BJP and this will be evident once the results are out. Hooliganism, the lumpen nature of politics, extortions, syndicate raj, lawlessness and appeasement of one community at the cost of others by the Trinamool has turned the bhadralok away from the Trinamool,” says BJP state president Dilip Ghosh.

Elgin Road in south Kolkata is a genteel neighbourhood and famous for Netaji Bhawan, the two-storied house where Subhas Chandra Bose used to live. A little distance away - the address is 90, Sarat Bose Road - is another two-storied old house where Subhas Bose’s elder brother Sisir Bose used to reside. His widow Krishna Bose and her son Sugato Bose, a Harvard University professor, reside there now. Krishna Bose, and Sugato as well, have been Trinamool MPs. In July 2017, when the family undertook some minor repairs of their house, members of a local ‘syndicate’ barged in (read this) and threatened them for not procuring the building materials and labour from them. The incident hit the headlines in local newspapers and exposed the ugly face of the Trinamool-syndicate nexus.

Mangat Ram, 67, runs a small kiosk selling cigarettes and paan on Sarat Bose Road. He remembers the incident. “The police arrested the syndicate goons who went into that house. But we suffer extortions every day from Trinamool dadas (musclemen) and the police don’t act against them. I have to part with a good part of my earnings every week,” he complained. Ram lives with his wife, a seamstress, two sons and their families in a small two room tenement in Bhawanipore, not far from chief minister Mamata Banerjee’s residence.

Mangat Ram’s sons Abhishek and Abhinav, both in their early 40s, have their own small shops selling electrical goods, one on Hazra Road and other on Sarat Bose Road in south Kolkata. “I have to ‘donate’ about 20 per cent of my earnings every month to the Trinamool. And during the Durga Pujas and other festivals, the amount is higher. I also have to give out electrical items like wires and switches for free to the Trinamool-patronised Pujas. Moreover, there are many factions within the Trinamool and once I pay one faction, the others also demand. This tolabazi has become unbearable,” says Abhishek.

Next to Abhishek’s electrical shop on Hazra Road is another medium-sized grocery store run by Bapi Mullick, a resident of Dhakuria in South Kolkata. “Every evening, I have to give six eggs and three to four packets of potato chips for free to a gang of local Trinamool dadas. And every month, I have to pay them amounts ranging from Rs 8,000 to Rs 10,000. On occasions like the Durga Pujas, I am forced to donate anything between Rs 10,000 to Rs 15,000 to the Pujas they (the Trinamool netas) organise. Add to all this the hafta I have to pay to the police and Kolkata Municipal Corporation officers, and my monthly earnings get nearly halved. This cannot go on,” said Bapi, who has a cancer-afflicted mother and a family of five to look after.

These are not isolated cases. “Everyone, starting from a small tea-seller to a rich businessman and even professionals like doctors, have to share a part of their earnings with the Trinamool goons. The loot is shared by all in that party. This tolabazi keeps the Trinamool machinery consisting of goons and lumpens running. But it is the common people who are suffering,” says BJP Kolkata South candidate Chandra Bose.

The Trinamool’s Kolkata North candidate Sudip Bandopadhyay is perhaps the face of the rot that had set in that party long ago. An accused in the Saradha chit fund scam, he was arrested by the CBI in early 2017 and spent many months in prison before being granted bail on health grounds. “His re-nomination is an insult to the electorate. And it exposes the moral bankruptcy of the Trinamool,” said Ritujoy Pal, owner of a jewellery store on BB Ganguly Road in North Kolkata. Ghosh, 62, says that all jewellers have to pay about 15 per cent of their earnings to two Trinamool factions headed by two MLAs.

Ordinary households are not unaffected by the Trinamool’s tolabazi. Mita Dey, 34, a widow, lives in a lower-income mixed neighbourhood in Entally in North Kolkata. She works as a security guard in a shopping mall in central Kolkata and has two school-going children and ailing father-in-law to look after. “My salary is Rs 12,000 a month, barely enough to make ends meet. But the security agency I work for deducts Rs 500 from my salary every month since it has to pay some Trinamool netas a hefty amount every month,” said Mita. The same story can be heard from lakhs of petty traders, rickshaw pullers, auto-rickshaw and taxi drivers, and people like Mita engaged in lower-level jobs. And this is what is driving the anger against the Trinamool.

But despite this widespread anger and disgust against the party, the Trinamool could just pull through and win both the Kolkata seats. That is because of its superior organisational strength, its ability to rig the polls through its goons and a pliant state machinery, and the solid support of Muslims who want to defeat the BJP at any cost. But even if the Trinamool bags both the seats, it will be a pyrrhic victory for the party.