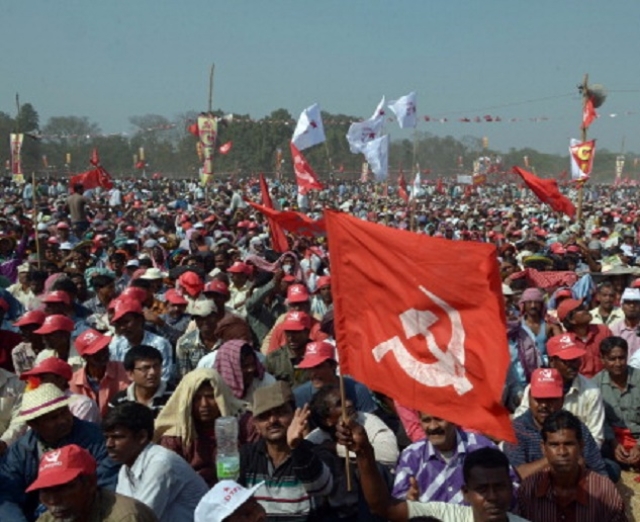 India’s Marxists have reached a dead-end. They perhaps suspect that too, but they just don’t realise that when one drives into a blind alley, one needs to reverse and get onto another road instead of driving into the wall in the fond hope that it’ll break down. Fact is, this wall standing in between the Marxists (including all communists) and the India of today will not break down.

For the simple reason that the proponents of this foreign ideology are caught in a time warp and still live in the past. Their ‘glorious’ past of agitations, bloodshed, industrial strikes and shutdowns, chaos and anarchy and worse that has left a state like Bengal that they have ruled for 34 ignominious years in utter ruin.

The latest example of the Marxists having blinkers on their eyes was provided by the secretary of the Bengal unit of the CPI(M), Surya Kanta Mishra, just the other day at a function held to celebrate the birth anniversary of Muzaffar Ahmed, considered to be one of the founders of the communist movement in India.

Mishra, the leading advocate of the calamitous and amoral pre-poll alliance with the Congress in Bengal, said at the function that the only way for his party to regain lost ground and make its presence felt in not only Bengal, but at the pan-Indian level, was through agitations and strikes. He thus exhorted the communist brotherhood--the various affiliates of the party--to make the nationwide strike called by various trade unions on 2 September a “grand success”.

Mishra went on to say that the only way the CPI (M) could “regain people’s confidence” was by bellicosely taking up “people’s issues” and “launching spirited agitations on behalf of workers, peasants and the marginalized”. Mishra’s language itself shows how he is totally out of sync with the India of today where the rising aspirations of the youth have to be met through quality education, skill development, and productive employment along with social and physical infrastructure.

Mishra’s words, if only he and his comrades would ever bother to keep their ears close to their matribhoomi’s ground, sound totally hollow to the people of this country. The Leftists, led by his party, had 34 years- a rare opportunity provided to any political party- to prove to the people of India that they are capable of good governance. They had nearly three and half decades to show that they walk their lofty talk. They had so many years to ameliorate the miseries of the people of Bengal and create a pertinent welfare state. Instead, all they did was execute ruinous policies that led to the devastation of Bengal and its people.

The 34 year old history of Bengal from 1977 to 2011 is a sad saga of strikes, agitations, bloodshed, social and political disharmony, industrial and economic decline, the rise of the lumpen, suppression of people’s democratic rights, academic decline, bureaucratic sloth, misgovernance, widespread unemployment, despondency and more. All because Bengal’s rulers are dogmatic- believing as they do in an ideology that has not produced any success stories of governance in any part of the world - and only concerned in protecting the interests of their party and selves.

The CPI (M)’s politics is one of disruptions, violence, hatred (for class enemies) and violence (annihilation of class enemies) that has no place in modern India. This is an India where people have come to aspire, to dream big and improve their lot. This is an India that doesn’t want to be held back by failed ideologies and politics of the past. Alas, Mishra and many of his comrades don’t realise this simple truth.

But there is another angle to this. Among the Marxist front rankers who were present at the function when Mishra spoke was former Bengal chief minister Buddhadeb Bhattacharjee, a man who had frowned on strikes and hartals and tried his best to steer his party away from the politics of disruption and violence. But he faced a lot of opposition from his own hardline comrades, including the hidebound Mishra, who would not stray from the party’s dated dogmas and did not let Bhattacharjee work towards renovating the state and the party. Once the Left lost Bengal in 2011, the party’s sticklers found in Bhattacharjee and other liberals very convenient culprits.

It would be relevant to cite the case of Mamata Banerjee here. She, for all her failings and shortcomings, has her finger firmly on the pulse of the people of Bengal. She too, in her earlier days as a firebrand Opposition leader, used to call for general strikes, hartals and shutdowns at the drop of a hat. But she then realised that people of Bengal were fed up with such disorders and just before coming to power, she had pledged not to call for any more disruptions. She has been true to her word, and has earned no trifling praise for that.

Bhattacharjee, too, had been a believer in strikes and bandhs in his earlier days. For instance, he was at the forefront of the prolonged agitation against introduction of computers, arguing that computerisation would lead to loss of jobs. Ironically, the same man made IT and ITeS his buzzwords when he became the Chief Minister. But then, communists are no strangers to such hypocritical U-turns. Till well into his second tenure as Chief Minister, Bhattacharjee never raised any objection to his party’s penchant for calling for bandhs and strikes on issues as diverse as “western imperialism” to “neglect” of West Bengal by the Union government. By the time he realised the uselessness of such disruptions, it was too late and the Left was already on its way out.

If the CPI (M) has to stay relevant in India, it has to ditch its communist ideology, just as the Communist Party of China (CPC) has done to become what the foggy-headed Indian communists would say is neo-liberal. In fact, they don’t have to look as far as China--they should learn a lesson from one of their own: Tripura chief minister Manik Sarkar. Sarkar, the pragmatist that he is, has dropped all subterfuges of being a communist bound by specious dogmas and a laid off ideology to do what is good for his state. That includes being pro-business and pro-capital.

Mishra and his ilk have to realise that to survive, they have to stop being communists in practice. They have to realise the ground reality that communism had been tested and it has failed all over the world. This ideology has only brought untold miseries to tens of millions of people in China, erstwhile Soviet Union, Cuba and some other parts of the world including Bengal and Kerala. To stay afloat in Bengal, the CPI(M) has to stop being communist and Marxist. That is the challenge before the party today.