The Truth Is Yeddyurappa Was Defeated By His Own Partymen 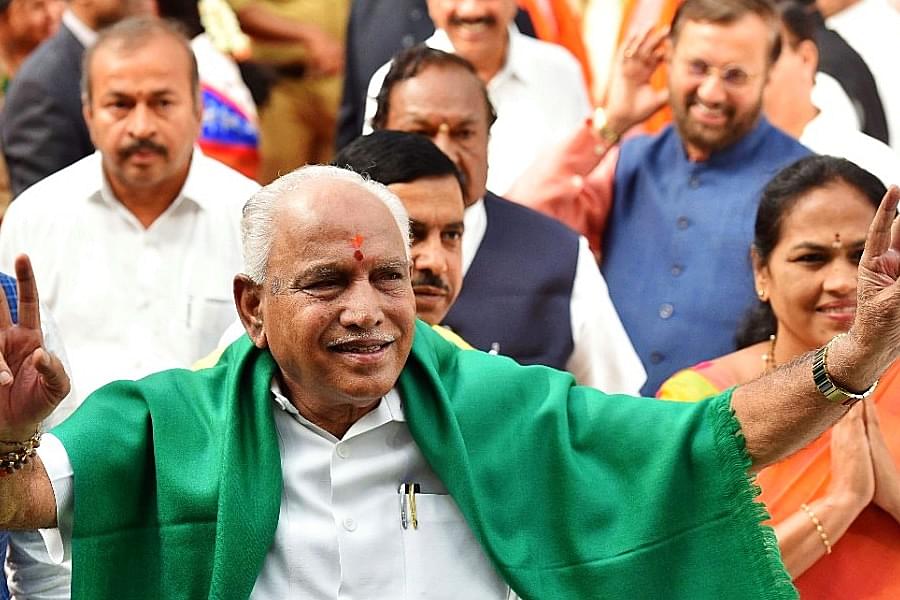 Even as H D Kumaraswamy is all set to be sworn in as Karnataka Chief Minister, the talk among Bharatiya Janata Party (BJP) circles is about how B S Yeddyurappa's (BSY) chances were sabotaged by some within the party. Factional rivalry is not new to any political outfit, but many BJP supporters are angry about how Yeddyurappa's chief ministership was cut short for the want of merely eight seats. They strongly feel that but for internal sabotage, Yeddyurappa would have acquired a proper, full majority.

How Did BJP Come So Far And Yet Fall Short?

To begin with, there were objections to even the nomination of Yeddyurappa as the chief ministerial candidate. This was followed by objections to his way of functioning within the party. Just after the victory in Uttar Pradesh last year, even as Karnataka was gearing up for elections, a group of party rebels led by K S Eshwarappa who is not known to be best friends with BSY, had called his style of functioning as “dictatorial” and been quite open and vocal about his criticism of the Lingayat strongman. He was protesting against the alleged favouritism in the appointment of party office-bearers by BSY.

With just one year left for the state elections, this “save BJP movement” was an evident indication that all was not well with the former chief minister and deputy chief minister of the state. BSY loyalists had hit back at the ‘anti-party’ actions of Eshwarappa whose squad was claiming to be the ‘original’ BJP.

All the factional rifts were reported extensively, and it was only after party president Amit Shah intervened that the other major fissure over Sangh strongman B L Santosh’s name doing the rounds for CM candidature, was sealed - at least for the time being.

But the fight for power had many hidden players with the factions trickling down to the booth level. As if Eshwarappa’s rebellion a year ago was not enough, the month before the elections saw yet another series of protests within the party.

The announcement of tickets, which happened late, and some just before the last date of nomination, is yet another instance of the problems within the Karnataka BJP. The factions that were not ‘favoured’ were not ready to reconcile and work towards a common goal. And everything was in the open. Those who could afford to jump fences, those who couldn’t stay put, did the damage. And the party leadership at the state level did nothing to alter this, and even if it had done, that definitely didn’t pay off.

Ticket aspirants who were denied a ticket for reasons that varied from pleasing new ‘aspirants’ like those that had been erstwhile Karnataka Janata Paksha (KJP) ticket-holders, to those that jumped the fence from other parties, were miffed. Be it in Belagavi, Bidar, Jamkhandi, Basvanabagewadi, the Hyderabad Karnataka region, Basavakalyana or Bijapur, the unrest among party loyalists who had been disregarded has cost the party a seat each and these handful of seats could have got it the majority it needed.

For instance, in Belagavi’s Bailanhongal, Jagadish C Metgud was sidelined to make way for the incumbent MLA, Vishwanath Patil, who had won the seat in 2013 from the KJP. Metgud’s supporters took to the streets in revolt, claiming that his loyalty to the party, in his refusal to follow BSY to KJP, had been disregarded. And sadly for the BJP, Metgud contested as an independent candidate and won 4,420 more votes than Patil. And in all this ruckus, the Congress laughed its way to the finishing line in the constituency.

Many other worthy candidates and party loyalists were reportedly sidelined, who then stayed within the party and either aided the victory of the competitor or reduced the chances of the one who had been chosen over them for the ticket.

While the first list saw dramatic opposition, the second list too was an attempt to accommodate as many ‘followers’ of BSY as possible, and the reason cited for this was winnability.

One more seat that could have remained with the BJP was that of Shobha Karandlaje, who had got a ticket in 2008 despite opposition from other leaders within the party. It is well known that not many within the party approve of her proximity to BSY or the resulting power that she had begun to wield. While in 2008 Yeddyurappa had nominated her from Yeshwantpur, this time the party is said to have taken cognisance of the rising bitterness of other Vokkaliga leaders within the party and hence gave the ticket to actor Jaggesh. While Karandlaje had been elected from Yeshwantpur in 2008, Jaggesh, who is also a Vokkaliga, lost by a massive margin.

While opposition from fellow Vokkaliga leaders and anti-BSY camp resulted in Karandlaje being sidelined, a union minister is being seen as having snubbed B Y Vijayendra’s chances to emerge as the next big Lingayat leader. Just when he was to file his nomination, after he had been designated by his father as the party candidate and had been campaigning in Varuna, the party’s national leadership instructed him not to. This had an impact not just in Varuna but also other constituencies in Mysore.

Both these actions were steered by those who do not approve of BSY’s style of functioning, especially senior members of the party who have always contested it. BSY’s feud with the party’s national organising secretary, B L Santosh, is known to everyone, and his appointment as poll-incharge was seen as a setback to BSY.
These, and many such other episodes, have cost the BJP its government in Karnataka. But for BSY, he has likely lost his final chance to be the CM of the state. What else justifies his almost tearful speech in the state assembly before submitting his resignation?